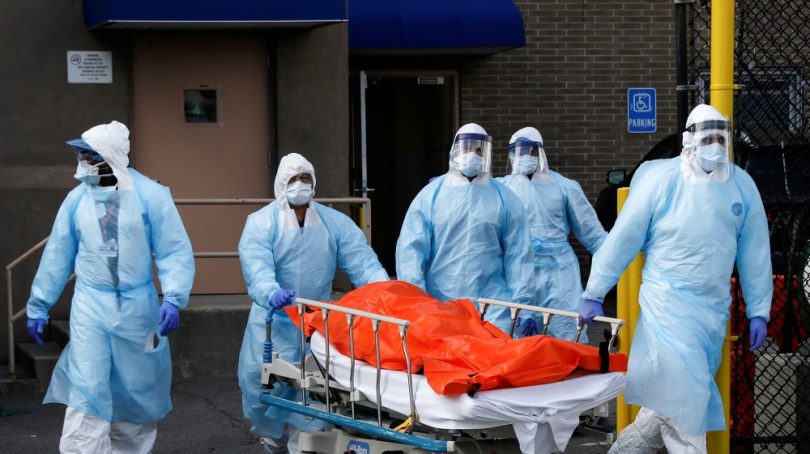 The death toll from the new coronavirus in the United States passed the 10,000 mark on Monday, according to a tally from Johns Hopkins University.

The country has the highest confirmed positives in the world, with more than 347,003 cases of the virus and 10,335 deaths related to COVID-19, the respiratory disease caused by it.

Public health officials and the White House are warning the upcoming weeks will likely see peak coronavirus outbreaks and hospitalisations in the U.S., with the death rate also set to sharply climb.

There are growing signs of impending shortages of medical gear and staff.

The U.S. had just 1,000 confirmed cases and about 30 deaths on March 10, with the outbreak spreading rapidly and across the country.

New York is the current epicentre, while Louisiana, Michigan, Illinois and California are also hotspots, with more due to emerge.

In the meantime, President Donald Trump has expressed hope coronavirus cases were “leveling off” in US hotspots, saying he saw “light at the end of the tunnel”.

On Sunday, New York, the epicentre of the US outbreak, reported a drop in the number of new infections and deaths.

Mr Trump described the dip as a “good sign”, but warned of more deaths as the pandemic neared its “peak” in the US.

“In the days ahead, America will endure the peak of this pandemic,” Mr Trump said at his daily coronavirus briefing.

Deborah Birx, a member of the president’s coronavirus task force, said the situation in Italy and Spain, where infections and deaths have fallen in recent days, was “giving us hope on what our future could be”.

We’re hopeful over the next week that we’ll see a stabilisation of cases in these metropolitan areas where the outbreak began several weeks ago,” Dr Birx said at the same new conference.

Earlier, the US surgeon general warned that this will be “the hardest and the saddest week of most Americans’ lives”.

“This is going to be our Pearl Harbor moment, our 9/11 moment,” Surgeon General Jerome Adams told Fox News on Sunday.