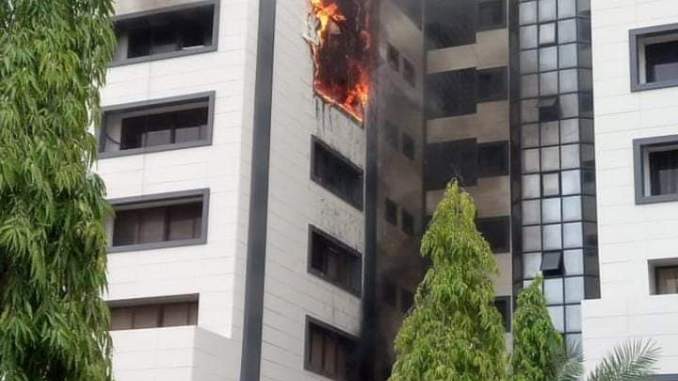 Dr Joe Okei-Odumakin, President, Centre for Change, has urged the Federal Government to bring to book perpetrators of the fire incident that gutted the Office of the  Accountant-General of the Federation (AGF).

Okei-Odumakin made the call in a statement in Lagos on Wednesday.

The fire on Wednesday gutted the Treasury House in the Office of the AGF.

Okei-Odumakin called for an independent investigation that would unravel the cause of the fire and those behind it.

The group president said the Federal Government should not allow the incident to be swept under the carpet.

Okei-Odumakin also wondered why it was the office that dealt with money and records of money that was gutted by the fire.

She said: “Nigerians are conversant with this kind of shenanigans in the past where fire outbreaks in sensitive government ministries, departments and parastatals are meant to cover up tracks.

“However, why add to our woes? Money will be used to put out the fire while money will also be needed to repair the burnt edifice.”

She urged that findings by a panel to investigate the cause of the fire should not be ignored, adding that any white paper arising from it should be fully implemented.

Oke-Osanyintolu made this known in a statement made available to the newsmen in Lagos on Friday.

According to him, “we received multiple reports of a fire outbreak at Ikeja Airport Hotel along Obafemi Awolowo Way in Ikeja at 9:59 p.m. on Thursday.

“On arrival at the above scene, it was determined that three vehicles had caught fire, one Toyota coaster bus (LND133XW), a Honda civic saloon car (AKR234LZ) and a Cadillac Escalade car with unknown registration number.

“The resultant fire affected the Tour Africa Transport Company within the airport hotel premises and not the hotel building itself.

“The flames have since been extinguished by our responders together with the Lagos State Fire Service.

“Presently investigation is being carried out to ascertain the cause of the fire,” Oke-Osanyintolu said.

He pleaded with the people in the area to be calm for further updates on the incident.

Oke-Osanyintolu, said that LASEMA Response Team from the Command and Control Centre were enrouting another fire outbreak at 2, Ikare, Close, Orimolade Crescent, Adeniyi Jones, Ikeja, by 11:40p.m. on Thursday.

He explained that when the Tiger Team arrived at the incident scene, it was discovered that segment of the building was engulfed by fire.

arrival of the LASEMA Response Team, adding that no casualty was recorded.