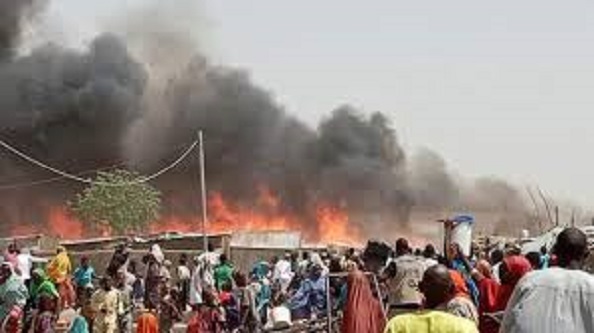 No fewer than 14 persons were burnt to death with 1,250 shelters destroyed in a fire outbreak in Internally Displaced Persons (IDPs) camp in Ngala Local Government Area of Borno State.

Rep. Zainab Gimba, representing Bama/Ngala/Kalabalge constituency in Borno, made this disclosure in an interview with the newsmen in Maiduguri on Thursday.

Gimba said that 15 persons sustained various degrees of injuries, while property including foodstuffs were destroyed by the Thursday inferno.

She said that dozens of households in the camps were displaced during the fire outbreak which gutted almost half of the shelters at the camp.

The lawmaker said that the incident had further compounded the plight of the IDPs.

“I wish to sincerely sympathize with the victims of today’s fire disaster..

“I am deeply shocked and touched. For those that lost their loved ones, please accept my heartfelt condolences, for those that sustained injuries, I wish them quick recovery.

“I am also mindful of the fact that the next few weeks will be difficult because it is not easy to be an IDP and homeless at the same time, but very soon Insha Allah, I will send relief materials to cushion the hardships,” she said.

When contacted, Hajiya Yabawa Kolo, Chairperson of SEMA, described the incident as “unfortunate” noting that it came at a time when the state was faced with another humanitarian challenge of preventing COVID-19.

Kolo said that a team of the agency would conduct on the spot assessment to ascertain level of damages incurred as a result of the fire incident with a view to providing immediate humanitarian support to the affected victims.

She said that the agency would adopt proactive modalities to prevent future recurrence of the incident.

NAN recalled that a similar incident occurred in less than 24 hours when fire destroyed 700 shelters and rendered thousands of IDPs homeless at a camp in Mafa local government area in the state.

In the meantime, the National Youth Council of Nigeria (NYCN) has called for full-scale investigations into the fire outbreaks that affected parts of the Accountant-General of the Federation’s office and the headquarters of Corporate Affairs Commission (CAC) in Abuja.

The NYCN, in a statement signed on Thursday by its President, Mr Solomon Adodo, said the incidents were regrettable, especially at a time the country was battling with the novel Coronavirus pandemic threatening human existence.

Adodo sympathised with the Federal Government over the unfortunate incidents, but noted that thorough investigations were needed to unravel the causes of the fire outbreaks.

The News Agency of Nigeria (NAN) recalls that fire recently broke out at the Treasury House, the building housing the AGF’s office in Abuja.

NAN also reports that exactly one week after, another fire outbreak was reported at the headquarters of the Corporate Affairs Commission (CAC), a situation that made many to be suspicious of the coincidence.

However, the NYCN urged Nigerians to be calm and give government the benefit of unraveling the causes of the incidents, even though the AGF had assured that the inferno did not destroy any record.

“We urge the government to do a full-scale investigation, using the right professionals and security agencies to determine exactly what led to the fire incidences.

“If it is a case of sabotage, those guilty should be made to bear the consequences of their dastardly acts, as the fire that gutted particularly the AGF’s office had raised concern in many quarters.

“Some have alleged that funds donated for management of COVID-19 pandemic had been diverted and that the building was set ablaze to destroy documents and records of the social intervention transactions during this period.

“Thankfully, the AGF has come out clearly to say that all the financial documents are intact,” the statement quoted Adodo as saying.

He urged the Federal Government to remain committed to addressing the challenges posed by COVID-19 and ensure that all donations made towards the containment of the pandemic were judiciously and transparently applied.

“We hereby call on the Federal Government to ensure judicious and transparent utilisation of all the donations.

“We also urge government to ensure that the social intervention efforts get to the citizens who truly deserve assistance, particularly the youth, who have been deprived of eking out a living owing to the lockdown,” the statement added.

In the meantime, Gov. Bello Matawalle of Zamfara has received 14 AK47 rifles and 10,000 live ammunition recovered from bandits by troops of  Operation Hadarin Daji (OPHD).

News Agency of Nigeria (NAN) reports that Brig.-Gen. Aminu Bande, Commander of the OPHD handed the firearms to the governor at the Operation’s headquarters in Gusau.

Bande, who is also the Commanding Officer, 8 Division Sokoto, informed Matawalle that the troops had made life very unbearable to the bandits both in the bushes and along their escape routes.

“This is why many of the unrepentant bandits are lobbying to come and surrender themselves under the state government peace initiative in order to escape the troops’ superior fire power.

“We will continue to engage these criminals until the whole state and its environs are completely secured,” Bande said.

The commander also informed the governor that one General Purpose Machine Gun, three Fabrique Nationale rifles and one AK-47 rifle were surrendered to the troops by some repentant bandits.

The commander attributed the successes to the cooperation given to the troops by the people of the state, especially in divulging credible information that led to breaking up the ranks of the criminals.

Gov. Matawalle lauded efforts of the officers and men of the operation and announced a donation of 190 motorcycles to ease movement of the troops in hard to reach areas where the criminals take refuge.

He said that the state government would soon release additional 200 vehicles to security outfits in the state to facilitate their operations and rid the state of criminal elements.

NAN reports that criminal activities including banditry, cattle rustling and kidnappings had resurfaced in the state after an initial lull.

The situation provoked aggressive pursuit of the criminals by troops, forcing them to either surrender or leave the state.