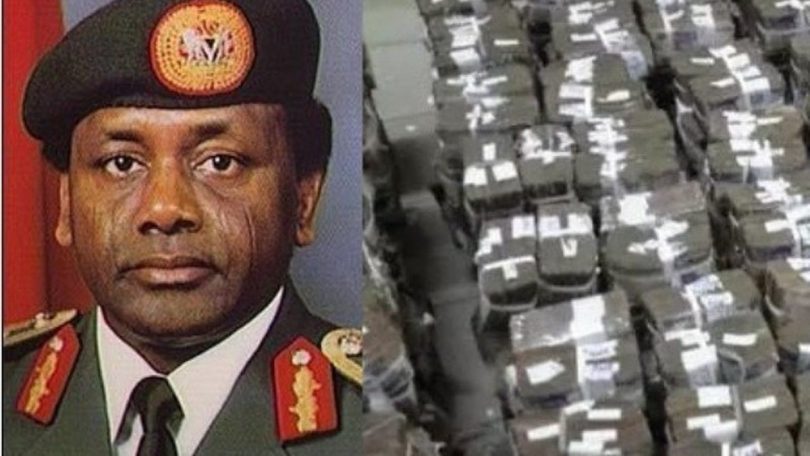 The Attorney-General of the Federation and Minister of Justice, Abubakar Malami, SAN, confirmed the receipt of 311,797,866.11 million dollars of the Abacha assets repatriated from the U.S. and the Bailiwick of Jersey.

Malami made the confirmation in a statement issued by Dr Umar Gwandu, his Special Assistant on Media and Public Relations on Monday in Abuja.

According to Malami, ‘the amount increased from over 308 million US dollars mentioned in the press release issued in February to 311,797,866.11 million dollars following the accrued interest from Feb. 3 to April 28 when the fund was transferred to the Central Bank of Nigeria’.

He noted that the litigation process for the return of the assets titled ‘Abacha III’ commenced in 2014 while the diplomatic process culminated into the signing of the Asset Return Agreement on Feb. 3 by the Nigeria government, U.S. and the Bailiwick of Jersey, commenced in 2018.

“This Agreement is based on international law and cooperation measures that set out the procedures for the repatriation, transfer, disposition and management of the assets’’.

He said the recovery effort consolidated on the established record of the administration of President Muhammadu Buhari which has a history of recovery, including that of 322 million dollars from Switzerland in 2018.

“These recoveries are transparently and judiciously deployed in supporting indigent Nigerians as specified in the agreement signed with Switzerland and the World Bank.”

The Minister who led the negotiation team noted that the Tripartite Agreement and the process towards the implementation represent a major watershed in International Asset Recovery and Repatriation as it seeks to provide benefit to the victims of corruption.

“In line with the 2020 Asset Return Agreement, the fund has been transferred to a Central Bank of Nigeria Asset Recovery designated account and would be paid to the National Sovereign Investment Authority (NSIA) within the next fourteen days.

“The NSIA is responsible for the management and execution of the projects to which the funds will be applied’’.

Malami said the government of Nigeria has committed that the assets will support and assist in expediting the construction of three major infrastructure projects across Nigeria.

“The projects are the Lagos – Ibadan Expressway, Abuja – Kano Road, and the Second Niger Bridge,’’ he explained.

He said that the federal government is in the process of establishing a Project Monitoring Team to oversee the implementation of the projects and report regularly on progress made to the public.

“The process for the engagement of the CSO monitor has already commenced with the adverts placed in two Nigeria newspapers –Daily Trust and the Punch of March 4 and a Notice of Extension on April 17, the Federal Tender Journal March 9 and 23, the Economist March 14.

“The advert can also be found on the website of the Federal Ministry of Justice – www.justice.gov.ng”

It would be recalled that the recovered funds were laundered through the US banking system and then held in bank accounts in the Bailiwick of Jersey.

In 2014, a U.S. Federal Court in Washington D.C. ordered the forfeiture of the money as property involved in the illicit laundering of the proceeds of corruption arising in Nigeria during the period from 1993 to 1998 when Late Gen. Sani Abacha was Head of State.

In 2017, the federal government filed a case in the Bailiwick of Jersey to assert its authority as the owner of these funds and as the victim of the action of Abacha.

Meanwhile, Mr Geoffrey Onyeama, the Minister of Foreign Affairs, says about 4,000 Nigerians abroad are willing to come home as a result of COVID-19 pandemic.

The minister disclosed this at the Presidential Task Force on COVID-19 daily press briefing on Monday in Abuja.

He said if the Federal Government had its way and there were enough bed spaces at the isolation centres all Nigerians abroad willing to come home would be brought back.

The minister stated that government was in the process of repatriating Nigerians abroad who were willing to return and Emirates Airlines had indicated interest to bring them back to Nigeria.

He added that the airline would operate on May 6, to bring Nigerians abroad back to the country and the returnees would be the first batch to be brought from abroad.

According to him, “we have secured 300 beds in Lagos and 1,000 in Abuja, the Governor of Lagos has been outstanding in his support, he has done a great job and his leadership quality is exemplary”.

“Ideally we would have loved if the Airways come to Abuja, but we have to make do with what we have, we have to understand the challenges our people are facing,” he said.

Onyeama said that it had also done a deal with the United States of America if there was any flight available that would be coming to Nigeria.

“On Monday we did a deal with Ethiopian Airlines to bring back our people. Air Peace is coming from London on Saturday and we are doing a deal if they can bring our people back to Nigeria,” he said.

He also said that a large number of Nigerians currently in China are willing to come back home, adding that the government is trying to do a deal with how they could be brought back to the country.

He added that Nigerians in India too would be brought back, adding that the government will do everything possible to bring Nigerians back home.