Crack police detectives in Lagos who went in search of the ‘killers’ of one Miss Margaret Adiya Ikumu, following a petition to the Lagos State Police Command, have arrested the 20 year old Adiya Ikumu, pleading that she actually masterminded her ‘purported mysterious death’.

A member of her family, Tony Iji who provided the update as lady, now detained by police was not allowed to speak with the media, also revealed that the Lagos State Police Command is however determined to unravel why Adiya would plot her own death.

A police officer who spoke on conditions of anonymity, told the Maritime First that they were more interested in identifying why she announced her own death, through some Facebook accounts.

“There are several angles to it and we are exploring all the options. Was she having a running battle with her family and so, decided to terminate every link with them?

“Was she playing a script by an older, wiser entity, who had other plans, and was presently applying the strategy to test the waters, before trafficking or finishing her off?

“Was she indebted to a promise she could no longer fulfill and thinks arranging a mysterious death would be a valid escape relief?”, he explained, assuring that the truth would soon be unmasked.

It would be recalled that Tony Iji had earlier dispatched a petition, on May 15th, on behalf of the family to Police Commissioner Ademosu, pleading for intervention to assist the family retrieve her corpse, from friends who confirmed her death on the Facebook, switched off her regular phone and could only be reached through chat, after her purported death.

Iji in the petition had indicated: “On Monday, May 11, 2020, we received a call from our relations from the village informing us about a Facebook information announcing the death of Margaret and requested that we should try to investigate to know what happened since her friends who made the announcement on Facebook were not ready to disclose to them the circumstances surrounding her death.

“Through the help of Facebook, some of our relations were able extract contacts of two ladies, Marvelous Mary and Nneka Buddy who claimed to be Margaret’s friends, and they confirmed to us through chat that Margaret had a nose surgery but could not survive the operation. They told us that they were already making plans to bury her body on Thursday, May 14 on the ground that they had the instruction of the late Margaret not to allow members of her family to know anything about her death and that they were authorized by the deceased to bury her according to her wish.

“We pleaded with them to provide us with details and circumstance of her death and how we can retrieve her corpse for burial, but they remained adamant and insisted on going ahead with their plans.

“At this point, when we discovered that they were not ready to co-operate with the family, we organized a search team and for two days, they combed Lekki and Ajah area of Lagos where they told us she was staying with her friends but we could not lay hands on any useful clue.

“On Thursday, May 14, the two friends, Mary and Nneka, sent a message that the burial has been done.  To make the game look real, the two ladies released a number of information to the family to show that the lady was dead and buried.

“Among pictures released as evidence were first of all her alleged corpse all rapped in the hospital where she was said to have died, a written note purportedly written by her instructing the girls to take possession of her corpse for burial without the involvement of her family, a picture of a casket they bought and a dug grave in preparatory for her burial.

“By evening of May 15th, and morning of May 16th, the news about the incident had gone viral on social and other media platforms with the pictures of the alleged deceased and her two friends. The reason for the media bombardment was to smoke out the two ladies and their other conspirators”, Iji further explained.

When the detectives however swung into action, it was the same Margaret that was uncovered, pleading now at Ajah Police Station for forgiveness, explaining how she planned her ‘mysterious death’. 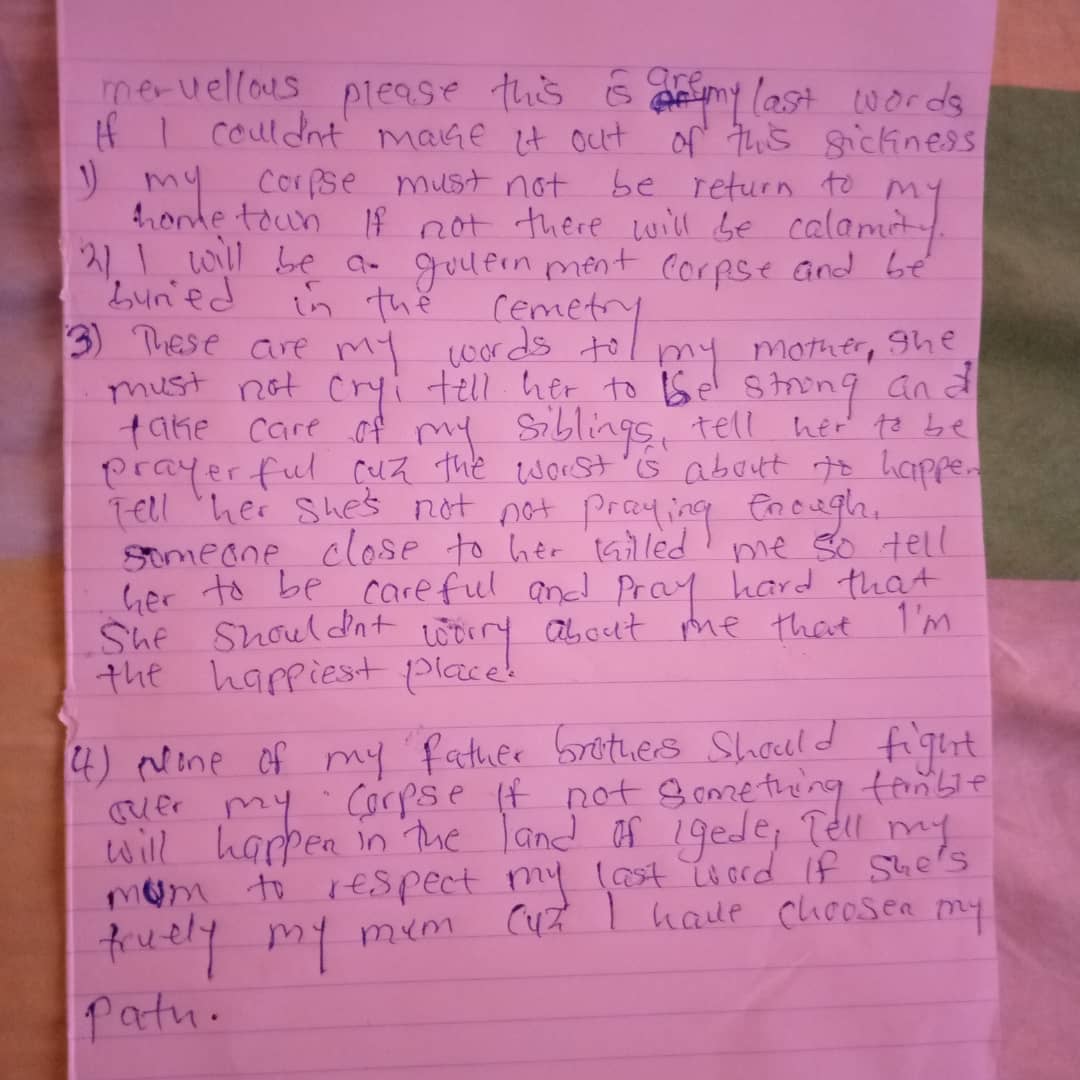 For now, she has insisted that there was no external influence, that she actually created all the Facebook accounts she used; and that all the pictures used to give credence to the purported death were sourced, personally.

The family is yet to understand why one of their would contrive and fake her own death.

Meanwhile, the Facebook accounts of her two friends, Marvelous Mary and Nneka Buddy,  have been hurriedly deleted”, cutting them off from further prying eyes, except that of Margaret Ikumu.

Iju said the family was yet to recover from the trauma of the ‘irresponsible action’.