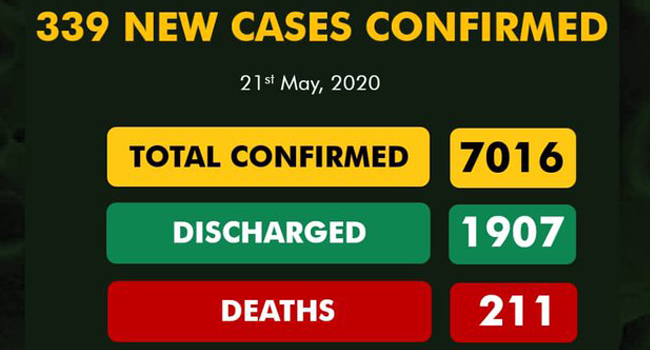 …As Oyo in bumper harvest, unveiled***

The Nigeria Centre for Disease Control (NCDC) on Thursday confirmed 339 new cases of COVID-19 in the country, bringing the total number of infections to 7,016.

Nine new patients were however confirmed dead to the virus, bringing the total number of deaths in the country to 211.

The health agency explained that most of the fatalities recorded from COVID-19 were cases with other underlying illnesses known as co-morbidities.

NCDC said that the 339 new cases were confirmed in 18 states, while nine deaths were recorded in Nigeria as at May 21.

The NCDC however noted that no new state has reported a case in the last 24 hours.

The health agency said that till date 7,016 cases have been confirmed, with 4,898 Active Cases, while 1,907 cases have been discharged and 211 deaths have been recorded in 34 states and the Federal Capital Territory.

The NCDC said it would continue to work with different stakeholders to provide communities across the country with the right information to stay safe.

“We are grateful to the Nigerian Association of Technologists in Engineering for supporting national COVID19 response with face masks and hand sanitisers.

“We continue to work with professional bodies in the whole-of-society response to COVID19,” it said.

The health agency emphasised that regular handwashing was very important to reduce the risk of spread of COVID19.

“An important moment to wash your hands is after handling money, especially if you are handling or eating food,” it advised

Meanwhile, Oyo State in a bumper harvest, recorded 28 new confirmed cases of COVID-19, according to NCDC, on Thursday night.

The latest figure not only increased the total number recorded in the state to 190, it also heightened fear among residents, even though majority of them still go out without the use of face masks against the directive of the government.

This nonchalant attitude of some of the residents had prompted the state COVID-19 Task Force to intensified sensitisation programme in Oke-Ogun area of the state on Thursday, where it threatened to sanction erring members of the public that fail to wear face mask.

Olatubosun, who chaired the media committee of the task force, said defaulters of the guideline would be prosecuted and appropriately punished.