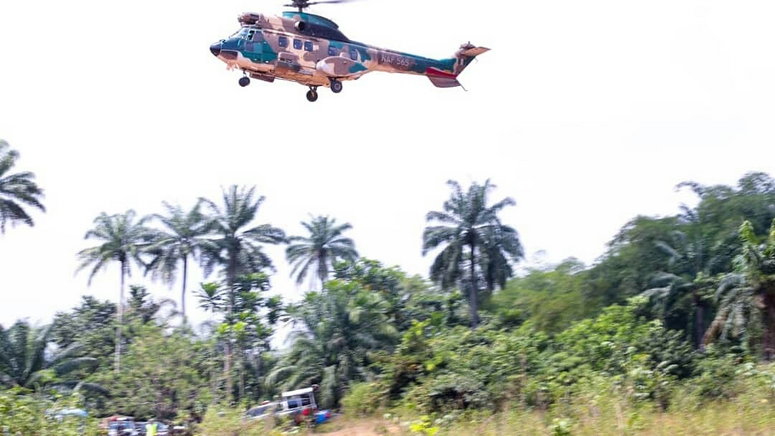 The onslaught against insurgents may have attracted another dimension as the Air Component of Operation Hadarin Daji has killed no fewer than 200 armed bandits in multiple airstrikes in Katsina and Zamfara.

The Coordinator, Defence Headquarters Media Operations, Maj.-Gen. John Enenche who confirmed this on Sunday in Abuja a statement, also assured that the offensive operations to rid the country of bandits and other criminal elements would remain on course.

Enenche said that close to 200 bandits were killed in multiple airstrikes conducted at Ibrahim Mai’Bai’s Camp in Jibia Local Government Area of Katsina and Kurmin Kura in Zurmi in Zamfara on May 22 and May 23.

He said the airstrikes were executed, following confirmation that the two locations were being used as hideouts for some bandit leaders while also serving as collection points for rustled cattle.

According to him, the air component, employing Nigerian Air Force ground attack aircraft and helicopter gunships, engaged the two locations in multiple passes, destroying makeshift structures in the camps as well as killing bandit leaders and their fighters.

“Human Intelligence sources later confirmed that close to 200 armed bandits were killed in the airstrikes at the target locations.

“The Chief of Air Staff (CAS) commends the Air Component of Operation Hadarin Daji for their professionalism and directs them to remain resolute toward eradicating all armed bandits.

“The CAS has also directed that additional assets be deployed to cover Kaduna, Niger, Nasarawa and Kogi States to frustrate any attempt of the bandits to relocate to adjoining states,” he said.

In a related development, the Nigerian Army said it actually eliminated over 1,015 Boko Haram terrorists in different encounters with the insurgents in the Northeast between April 4, 2020 till date.

The Chief of Army Staff (COAS), Lt.-Gen. Tukur Buratai disclosed this on Sunday when he hosted the troops of Operation Lafiya Dole to Eid-El-Fitr luncheon at Military Control and Command Centre in Maiduguri.

Buratai said that the insurgents were neutralised since his arrival in the Theatre to lead the troops under Operation KANTANA JIMLA within the period under review.

He explained that the Artillary’s airstrike and blockage operations conducted by troops at the Tumbuktu Triangles around Sambisa has been greatly successful.

He said that the troops succeeded in dislodging major camps of the terrorists at Mungusum, Gajirin, Talala, Buk, and Malumti among others under the operation.

“Hundreds of terrorist fighters have been neutralised in this different camps as confirmed by the force and captured terrorists while trying to escape the operations.

“Many more hundreds have been injured and are hiding in the forest with serious wounds.

“This explains why the terrorist have resulted to desperate attacks on towns and villages such as Babangida, Dapchi searching for medical supplies and other logistics to treat their injured colleagues, who are dying like foul in the forest.

“Overall, since my arrival here in the Northeast on the 4th of April this year, you gallant troops of operation Lafiya Dole have neutralised over 1,015 Boko Haram terrorists.

“Also, you have impressively maintained the blockage of Boko Haram logistics supply chains and freedom of movement within the Tumbuktu Triangles.

“In a light manner, the Nigerian army intelligence core has impressively been organised and its operations has greatly improved.

According to him, this has greatly disrupted their logistics supply chain and communication network, thereby tightening the blockage around them.

“It is also gratifying to note that officers and men of the Nigerian army, fighting in close support with the combatant personnel of the Nigeria Navy Special Force Services and the gallant pilots of the Nigerian Airforce, have consistently disrupted the terrorists moves and done well in neutralising them,” he said

The COAS said it had also sustained some casualties while others sustained injuries while executing the operations.

“We pray for the departed souls even as you continue to look after injured ones to the best available standard,” he said.

“Like all other sectors in the country, the Nigerian army has its own share of some Challenges. This inadequacies of recent times has further compounded by the global lockdown occasioned by the COVID-19 pandemic, which has to some extend delayed the arrival and delivery of some of our much needed military equipment.

“However, our good foresight as examplified in the investment in the local production of the Ezegwu, Concoror and the Champion Mrap, alongside other notable efforts that are proffiting some of our old equipment by the Command Engineering Depot and the Special Vehicle Plant and the Defence Industry Corporation of Nigeria, have assisted in sustaining our operations thus far.

“We have also embarked on special recruitment sub commissioning exercise to carter for our manpower challenges.

“We are restructuring our forces to enable them fight better within the dictates of the new assymetric warfare we are encountering today.

“In this regards, in the four Special Forces Command, we have trained Special Brigades and Special Forces Battalions, which have been established. Two of these battalions recently completed the special forces training and have been inducted into this Theatre.

“It is expected that the effects of their specialised training and modes of operations would be felt across the Theatre in the days to come.

“Therefore, what remained is our collective efforts as a nation and as officers and men to make good use of this platforms to end insurgency and other forms of criminalities across the country.

“The Nigerian army on it part remained focused in dealing with the insurgency and other forms of criminalities in the country and will not allow itself to be distracted from unpatriotic elements in the society.

“I commend the support and sacrifices of each and every one of us, especially those who have paid the supreme sacrifice. I charged you all never to allow the sacrifices of our fallen heroes to be in vain,” said Buratai.

In his remarks, Gov. Babagana Zulum, acknowledged the tremendous success recorded by the Nigerian military during the last two months and prayed to God to give the troops more strength, wisdom, courage, long life and productivity to fight the insurgency.

“I want to express our appreciation to those that are here and to the COAS, and other high ranking military officers for the enormous support that you have been rendering toward protecting the lives and property of the displaced communities of Borno state.

The governor noted that the security architecture has to be motivated for greater efficiency and productivity, and pledged his administration commitment toward supporting the military to succeed in the counter terrorism campaign.