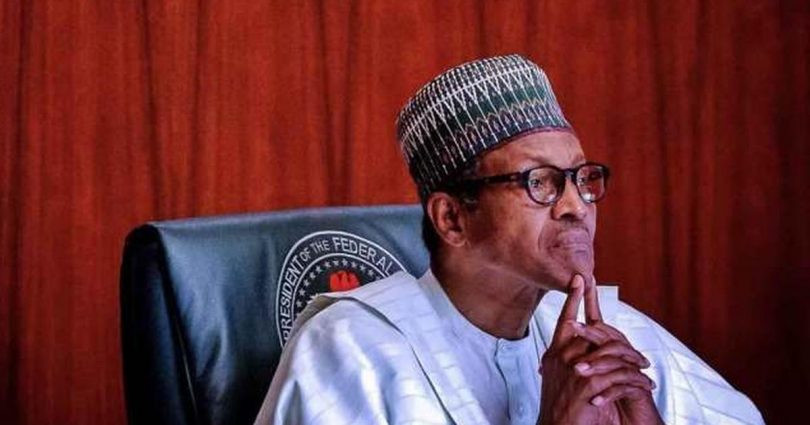 President Muhammadu Buhari has sought the approval of the Senate for an external loan of $5.513 billion to fund the revised 2020 Appropriation Act.

Buhari’s request was contained in a letter addressed to President of Senate Ahmad Lawan and read at plenary on Thursday.

Buhari in the letter said the loan which would be sourced from the multilateral organisations would be used to finance the revised 2020 budget and priority projects of the Federal Governments.

He said the loan became necessary given required funding of the revised 2020 budget and moves to insulate the nation’s economy from the COVID-19 pandemic.

The President added in the request that the loans being urgently sought for are targeted at critical areas of funding of the 2020 budget, execution of critical projects slated for 2020 fiscal year and projects to support the state governments.

The 2020 revised Appropriation Act received for senate consideration is now predicated on oil production of 1.93 million barrels and oil price benchmark price of 25 dollars per barrel.

While the total budget estimates stood at N10.509 trillion as against N10.59.4 earlier approved, which amounts to a difference of N85billion.

Senate also at plenary debated and passed for second reading the bill to amend the 2020 Appropriation Act, having receive the document and suspended its rule 70 to debate the revised document on 2020 revised appropriation bill.

In a related development, the Federal Government has implored the African Export-Import Bank (Afreximbank) to simplify the process for accessing the 500 million dollar creative support fund by the pan-African finance institution.

The Minister of Information and Culture, Alhaji Lai Mohammed made the plea in Abuja at the close of a virtual forum of the AU Ministers of Arts, Culture, and Heritage on the effects of the Coronavirus (COVID-19) pandemic on the creative sector.

The virtual forum organised by the AU Commission for Social Affairs was chaired by the Minister.

No fewer than 20 ministers made contributions on the effects of the novel Covid-19 pandemic on the creative sector in their respective countries at the forum.

In closing remarks, the minister said the President of the bank, Prof. Benedict Oramah should make the process of accessing the funding easier for small scale artists and other practitioners

“It is this fund that most of us will rely on, in looking up to the bank to save our arts, culture and heritage from the ravages of the coronavirus pandemic.

“We want Prof. Oramah to help the industry, by simplifying the process especially for small artists, fashion designers, make-up artists and others to access the funding through the various cooperatives which we are going to encourage them to form.

“The beauty of this industry is that after agriculture it employs the largest number of people especially women and youths,” he said.

Earlier in a presentation to the forum, Oramah recalled that just before the Covid-19 came, the bank announced the creative Africa support facility to the amount of 500 million dollar.

“It also target the financing of production, building infrastructure for the production of the creative goods and supporting companies that are engaged in the production,” he said.

He disclosed that the bank had developed a cooperative arrangement so that small scale actors in the industry could team up to access the fund.

“We know that many actors in creative industry are small and may not be able to have access to the financing giving their small sizes.

“We, therefore, created a cooperative instrument so that we can give money to them through cooperatives,” he said.

Oramah also recalled that the bank, in 2019, launched the African Payment and Settlement System to make it possible for Africans to pay for goods and services in inter-Africa trade through their local currencies.

He said the system which made it possible for somebody in Kenya to buy contents produced in Mali and pay in Kenyan Shillings would open the market for Africa creative goods.

Oramah, a Nigerian National and a Manager with the Nigerian Export-Import Bank before joining Afreximbank as Chief Analyst in 1994, underscored the need to create a mechanism for e-commerce on creative goods.

He said the mechanism would make it easier for Africans to trade among themselves and by doing so the creative goods would boom.

The bank president said the Covid-19 pandemic has severely impacted on the economy of the world and the global economy is expected to suffer the worst recession.

He noted that although the creative economy had been impacted but it had also shown some improvement.

“Some production activities has stopped such as the fashion sub-sector, production of movies and music had been impacted.

“However, we have seen tremendous growth in the demand for some creative goods as people get confined to their respective homes.

“Global distribution channels for movies and music such as Netflix, Amazon Prime and even those that focus on Africa have seen remarkable growth in subscription.

“Netflix for instance announced an unprecedented 16 million subscribers during the first quarter of this year.

“Although we do not have statistics, some local platforms in Africa have also indicated rising demand.

“So, we see that the creative economy has provided an opportunity for Africa, to a large extent, mitigate the impact of Covid-19 on our economy,” he said.