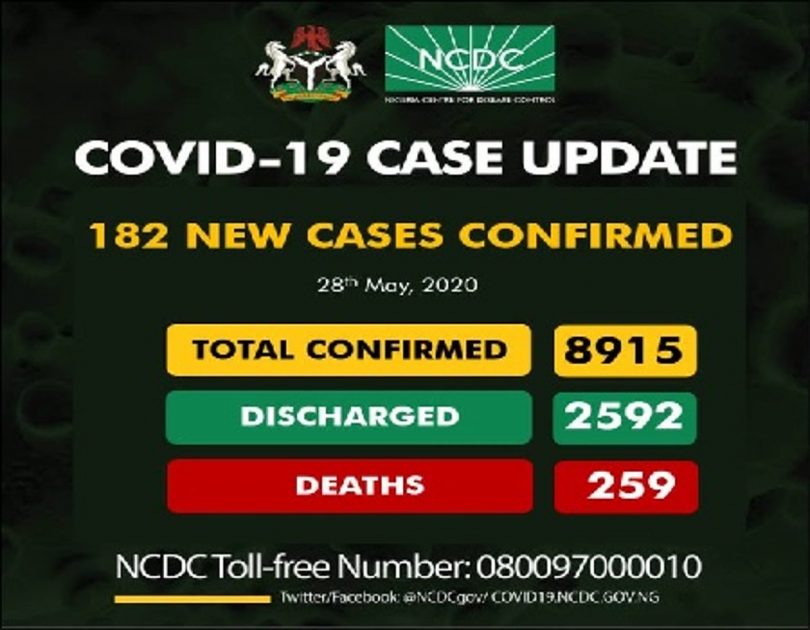 The Nigeria Centre for Disease Control (NCDC) on Thursday recorded 182 new cases of the Coronavirus, (COVID-19), in the country, the total active cases for Nigeria now stand at 6,064.

The NCDC, on its official twitter handle, said that as at May 28, 2020, 182 new confirmed cases and five deaths were recorded in Nigeria.

The NCDC said that no new cases have been reported in any new State last 24 hours in the country.

The center said that this took the country’s total infections to 8,915 out of which 2,592 have been discharged with 259 losing their lives.

The NCDC said that the cases were spread across 15 states and the FCT, with Lagos accounting for the highest number of infections for the day with 111 cases.

It said that till date, 8,915 cases had been confirmed, 2,592 cases discharged and 259 deaths had been recorded in 35 states and the Federal Capital Territory.

NAN reports that the Kogi government has rejected the two COVID-19 positive cases announced by the NCDC.

In its daily report of new cases on Wednesday, the NCDC said Kogi had recorded its first two cases.

Only Kogi state and Cross River were previously the only states not to have recorded any case of the virus.

However, during his appearance on Politics Today on Thursday on Channels Television, Kogi state’s Commissioner for Information, Kingsley Fanwo, described the NCDC reporting process as fraudulent.

“We are completely rejecting such declarations because they do not even conform to the protocols set by the NCDC itself.

“When you look at the history of the cases they declared, the patient was admitted at the Federal Medical Centre in Lokoja for symptoms that were far from COVID-19 symptoms.

“But they were not attended to there and the next thing was to bring them to the National Hospital in Abuja.

”And within a few hours, they were tested, and under 24 hours, the man was declared COVID-19 positive.

“It is fraudulent as far as we are concerned and we are rejecting them in its entirety.”

Meanwhile, the NCDC had earlier maintained that due process was followed in recording the Kogi cases.

At the briefing by the Presidential Task Force on COVID-19 in Abuja on Thursday, the Director-General of the NCDC, Chikwe Ihekweazu, said the Kogi index case was a referral from the Federal Medical Centre in Lokoja.

“There is actually no dilemma in the two cases,” he said. “They followed absolutely normal practice.

“A patient that was referred from the Federal Medical Centre to the National Hospital. This is a normal referral pathway when you have a case.

“The physicians in the National Hospital, I don’t have any influence over the work that they do. They suspected COVID-19 based on the clinical symptoms of the patient, asked for a test, and the test came out positive.

“The individual lives in Kogi state and public health response is based on where you live because that’s where your contacts are.

“So this is not controversial in any way.

”Standard practice was followed. Once the results came out, the state’s Epidemiologist was informed that he has to do contact-tracing around this patient.

”It is the state’s responsibility to do that contact-tracing. So we hope they do it. There is nothing actually controversial in any way about this.

In another development, Nigerian Army troops of Operation Lafiya Dole (OPLD) killed several terrorists in clearance operations across the theatres of operation in Borno, the Defence Headquarters says.

The Coordinator, Defence Media Operations, Maj.-Gen. John Enenche, disclosed this in a statement on Thursday in Abuja.

Enenche said the troops of Army Super Camp 11 Gambouru under Sector 1 of OPLD, while on clearance operation at Mudu town on May 24, neutralised 12 Boko Haram terrorist (BHTs).

He added that the troops also rescued 241 persons in captivity of the terrorists comprising 105 women and 136 children.

According to him, four Boko Haram terrorists’ flags, one motorcycle, two bicycles, one amplifier and two sewing machines were recovered.

He stated that the rescued persons had been safely evacuated from the village and were currently under medical observation, adding that the village had also been cleared.

According to him, there is no loss of life or equipment from the Army.

Enenche also disclosed that troops of 151 Battalion on Tuesday, successfully killed several terrorists including several suicide bombers, adding that a number of others fled with gunshot wounds.

He added that the troops successfully engaged the terrorists who were mounted on 10 Gun Trucks and attempted to simultaneously attack the troops’ locations at Banki Junction and Firgi in Bama Local Government Area under the cover of darkness.

According to him, the courageous troops overpowered the terrorists with superior firepower and captured one Cobra Armoured Personnel Carrier, one Dushka Anti-Aircraft Gun, one AK47 Rifle and 1 FN Rifle.

The troops also recovered 25 rounds of fabricated 7.62mm ammunition from the criminals.

“On May 24, a prominent Boko Haram fighter, Malam Adamu Yahaya, a.k.a Saad Karami, who led the last attack on troops in Baga town and equally participated in attacks on Metele, Mairari, Bindiram, Kangarwa and Shetimari (Niger Republic) voluntarily surrendered to troops of 242 Battalion in Monguno.

“This was as a result of the aggressive posture of the troops and artillery bombardments of terrorists’ suspected locations around the general area.

“The Chief of Army Staff congratulates the gallant troops for their professionalism and good conduct.

“Equally the High Command of the Armed Forces of Nigeria commends the troops and encourages them to sustain the momentum of their operations toward eradicating the terrorists from the North East,” he said