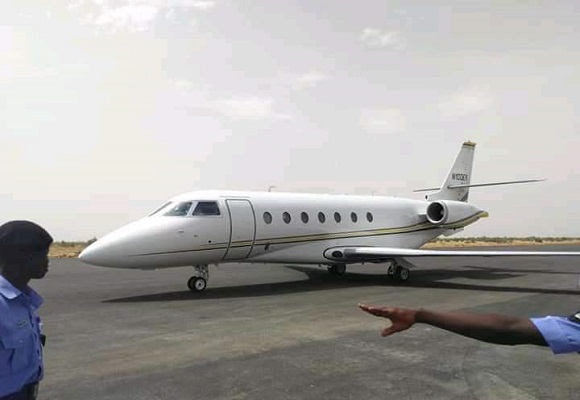 …As Immigration boss warns against extra charges on passports!***

The Minister of Aviation, Sen. Hadi Sirika on Monday announced that domestic flights, which had been suspended since March due to the outbreak of coronavirus in the country, will resume on June 21.

The Minister’s remark came in a statement issued in Abuja by Mr James Odaudu, Director of Public Affairs in the ministry, quoting Sirika as saying this, at the briefing of the Presidential Task Force on COVID-19.

According to Sirika, the resumption of flights will be based strictly on the implementation of the approved protocols for the safe operations of the airlines.

“The three-week period between now and the resumption date is to enable the operators to adhere to all the necessary industry regulations, without which they cannot take to the skies after being dormant for some time.

“This is because aviation, unlike other sectors, is a highly regulated one,” he said.
The minister added that consultations had been on between the ministry and the industry’s stakeholders on the best ways to operate profitably, while, at the same time, ensuring the safety of travelers upon resumption.

Sirika cautioned owners of private aircraft, who, he said, were in the habit of asking for permits to fly within the country despite the restrictions in place, to desist, as the restrictions were still in place.

“Except for those on essential services, which have been clearly defined,” the minister added.

He said that since approval for flights on essential services was not being paid for, it would take little or no time to grant it.

Sirika warned against people allowing themselves to be scammed by those outside the approving authorities, pointing out that the sector, under his watch, had zero tolerance for corrupt practices since his assumption of office as minister.

The minister also expressed gratitude to the stakeholders in the aviation sector for their cooperation, in spite of their unquantifiable losses, occasioned by the lockdown since March.

In the meantime, Mr Muhammad Babandede, the Comptroller-General, Nigeria Immigration Service (NIS), has warned personnel of the service against extra charges on passport issuance.

Babandede gave the warning during a virtual meeting with passport officers nationwide on Monday in Abuja.

The News Agency of Nigeria (NAN) reports that the programme was anchored from the NIS Headquarters Abuja.

Babandede, in a statement issued by the Service Public Relations Officer (SPEO), Mr Sunday James, said that Nigerians were not to be surcharged.

According to him, the service will continue to serve sincerely to gain people’s confidence.

“No extra charges are allowed apart from the approved fees that are on our website and all official publications of the Service,” he said.

Babandede noted that the meeting had a great impact on redirecting the efforts of the service toward rejuvenating and reinvigorating the new order in passport processing and procedure.

He said the adoption of processes that would bring ease and restore the confidence of Nigerians to the process where needed, to enhance the value of the document “The Green Passport – Our Pride”.

Babandede stated that an automatic passport reminder system was being test run at the service headquarters.

According to him, payment and other process status are being communicated to the applicant in the form of feedback, saying that same should be implemented by all the passport officers.

“The meeting is to set the pace for enforcement of compliance on payment for passport online.

“All the passport officers should establish a front desk office for our teeming applicants to ensure applications are submitted directly to the institution and not to individuals.

“On the issue of loss and stolen passports, the passport officers are advised to set up a tracking mechanism.

“Hence, loss and stolen passports should be treated on their merits and due diligence process should be followed to avoid culpability in passport related offenses,” he said.

Babandede noted that the passport officers, as the frontline officers in the administration and issuance of passport to bonafide Nigerians, were exposed.

He, however, cautioned on the need to be safe and health-conscious in handling both the passport and attending to the applicants by observing prescribed protocols by the Nigeria Centre for Disease Control (NCDC).

“We live in an unusual time that demands working while keeping social and physical distancing, adhering to NCDC protocols and above all, keeping the workforce on toes.

“To avoid the spread of COVID-19 from person to person and material to the person, while rendering service to the public, all officers and men should ensure they are guarded with those rules of staying safe,” he said.

Passport officers and participants at the meeting included the NIS eight Zonal Coordinators (Zone A to H), all State Command Comptrollers as well as the Lagos State Passport Command, among others.