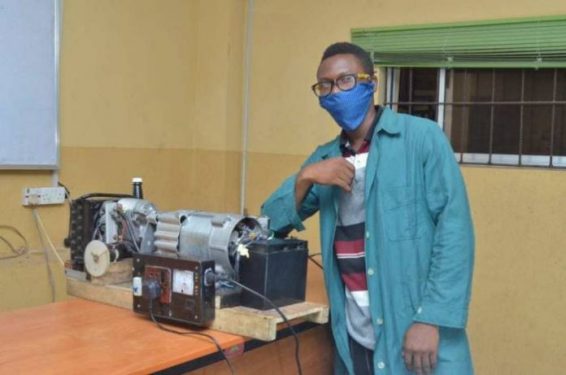 A student of Electrical Electronics in the College of Engineering, Gregory University Uturu (GUU), in Abia, Mr. Prayer Nwojoyi has designed and produced a 3KVA prototype of a hybrid fuel-less electricity generating set.

The university’s Principal Assistant Registrar/Head, Media and Public Relations, Mr Sleek Ogwo stated this in Umuahia on Tuesday, describing it as a dual-battery generator.

“The prototype is a 3KVA, dual-battery generator that requires neither solar power nor combustive material to generate electricity”, Ogwo said.

According to him, the prototype design was presented to the Vice-Chancellor (VC), of GUU, Prof. Augustine Uwakwe, by the Dean, College of Engineering, Dr Soccis Okoli.

Ogwo explained: “Uwakwe applauded the college for the innovation,” and gave the assurance that the university remained committed to solving problems through innovations.

“Uwakwe noted that the generator is another contribution of the College of Engineering towards combating the Coronavirus pandemic and cushioning its effect on the populace,” he stated.
The university’s spokesman further quoted the VC to have said that the institution had braced to the challenges posed by the pandemic and was poised to proffer solutions.

“Uwakwe stated that the invention of a fuel-less electricity generator will ensure the provision of uninterrupted, cost-free power supply to the masses,” Ogwo added.

He also quoted Uwakwe to have opined that the generator would help to mitigate some of the harsh effects of the COVID-19 lockdown.

Also, the dean of the college was quoted to have described the generator as different from those in the market.

“Okoli said that the department is ready to mass-produce and market the product.

“He also said that the generator is safe, cost-friendly and requires zero-input or maintenance after installation.

“In addition, it is a zero-emission generator which makes it eco-friendly,” the statement added.

Nwojoyi, the inventor, was said to have highlighted some of the features of the generator, which included “dual self-sustaining 12 volts 6 amp batteries that power the plant alternately, while also charging itself.

“According to the young innovator, ‘the machine has an automatic change-over that turns it on and off, thereby allowing instant change-over once an alternative power source comes on or off.’
“This eliminates idle-time and need for human intervention to change-over,” Ogwo stated.

He further quoted Nwojoyi as highlighting that “all the materials used in the design and construction were sourced locally.”

Ogwo stated that Nwojoyi is a former winner of an annual NTA Network Programme competition for Junior Scientists.

The competition was sponsored by Prof. Gregory Ibe, the Chancellor of the university and Managing Director of Skill ‘G’ Nig. Ltd, a frontline education development company.