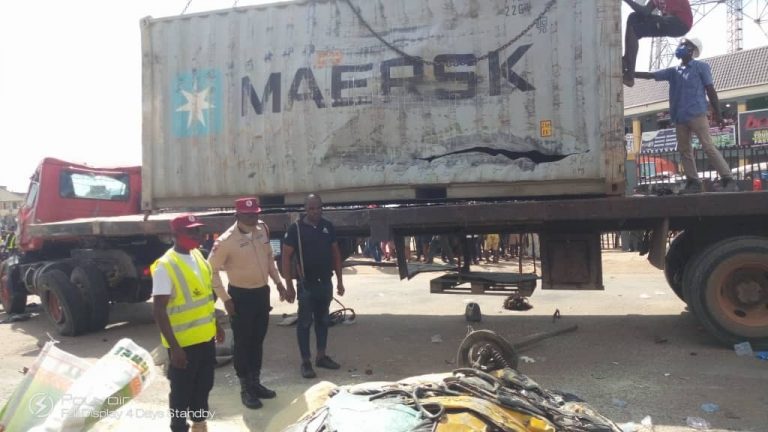 Kumapayi, who confirmed the incident to the newsmen in Awka, said the brakes of a trailer carrying a 20ft container failed, and the driver lost control of the vehicle, which fell on six others.

The commander said the accident occurred at about 10.46 a.m. at TRACAS bus stop.

“A total of 10 people ( eight male adults and two female adults) were involved in the crash. The victims were rushed to Toronto Hospital, Onitsha by the FRSC rescue team from Upper Iweka Outpost.

“Out of the 10 people involved, six,  (five male and one female) were confirmed dead at the hospital, while four males were critically injured, but responding to treatment.

“The corpses were deposited at the morgue in the same hospital, ” the sector commander said.

Kumapayi said the obstruction created by the crash was cleared by Julius Berger Construction Company and the vehicles towed to Central Police Station, Onitsha.

While consoling the families of the victims,  he warned motorists, especially articulated vehicle operators, against plying the highway with faulty vehicles.

”They should ensure that their vehicles are checked and serviced regularly, with particular interest on the brake systems to avoid unnecessary road mishaps and death, ” he said.

In another development, no fewer than 13 people are feared dead in a boat accident, on the waters of Lake Albert in the Democratic Republic of Congo.

The incident occurred late Monday on the lake on the border with Uganda by the village Kaswa in the Mahagi region of the province of Ituri, regional administrator Ukumu Pierre Klaver said on Tuesday.

Klaver said the boat left from Uganda with 17 people on board. Two people have been rescued so far, and two are still missing.

The official said that he thought the boat capsized in strong winds.

A search was continuing.

Accidents occur repeatedly on the lakes of Congo and other countries in Africa as boats are often overloaded and poorly maintained.