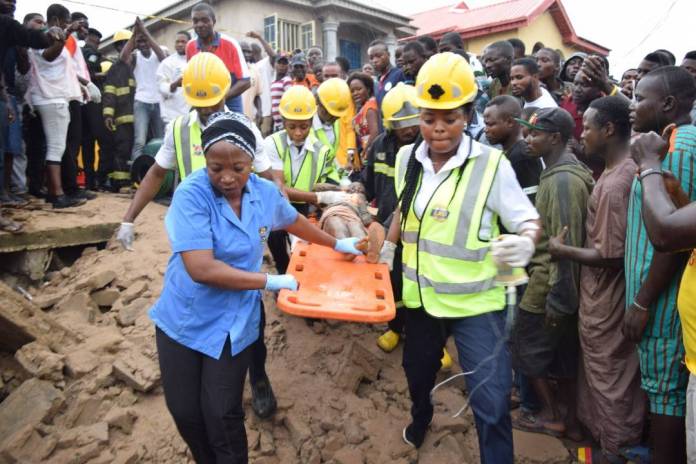 The Lagos State Emergency Management Agency (LASEMA) has confirmed that two children were trapped and died in a collapsed building situated at 46, Gafari Balogun St., Ogudu in Lagos State, after Wednesday heavy downpour.

LASEMA Director-General, Dr Olufemi Oke-Osanyintolu highlighted in Lagos that the Agency’s Response Team (LRT), actually brought out the remains of the victims after two hours of operations.

Oke-Osanyintolu said that the LRT received a distress call at 12.40 p.m of a collapsed building at the aforementioned location.

“On arrival at the scene by agency responders, it was observed that a building collapsed as a result of a mudslide at the rear of the building caused by heavy rainfall.

Also read:  6 die as container falls on vehicles in Anambra

“We were informed that two children, one male and one female, were trapped and immediately commenced a search and rescue operation.

“Unfortunately, they were found dead and their remains were transported to the mortuary,” Oke-Osanyintolu said.

He said that integrity test would be conducted on the remainder of the building which had now been cordoned off by the Lagos State Building Control Agency (LASBCA).

In another development, an Ikeja Chief Magistrates’ Court has admitted a 50-year-old prophet, Emmanuel Adeyemi, to bail in the sum of N500, 000 for allegedly chaining his step-son and burying four corpses in his residence.

The Chief Magistrate,  Mrs Taiwo Akanni, who slammed the bail on Friday, ordered the accused to produce two sureties in like sum.

She adjourned the case till Oct. 10 for mention.

Adeyemi who lives at No 16, Aderinola Olamiju Close, Unity Estate, Ojodu, a suburb of Lagos, was arraigned for deprivation of liberty and unlawful burial in his residence.

The Prosecutor, Sgt. Rafael Donny, told the court that the offences were committed at the accused residence between July and August, 2016 and unspecified dates.

The victim had been chained down for a month.

“On investigation, it was also discovered that the accused buried four different corpses in his residence without the permission of the Local Government,’’ he said.

The accused, however, pleaded not guilty.