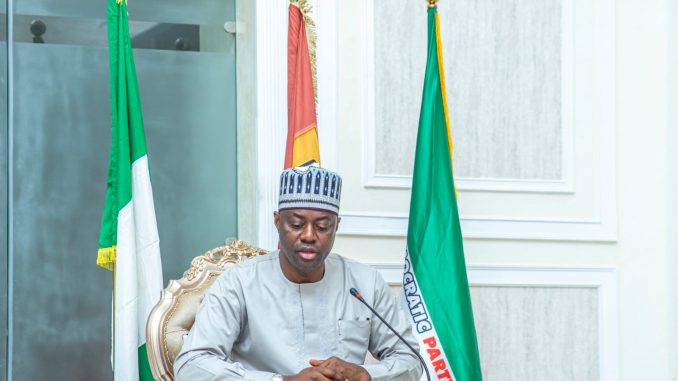 Gov. Seyi Makinde of Oyo State, on Wednesday, said that three members of the state executive council have tested positive for COVID-19.

Makinde, who made the announcement on his tweeter handle monitored in Ibadan, said that the results of two other members came back inconclusive and would be retested.

He stated that the affected members had been contacted, while contact tracing had commenced and their offices closed for decontamination.

He urged the people of the state to join in prayer for those who had contracted coronavirus and wished them a speedy recovery.

The governor further tweeted “COVID-19 is still very much with us. That we are taking steps to re-open the economy does not mean that the virus has disappeared.
“We must each take actions to protect ourselves and our families.

“We must each own our actions and take preventive measures, which include washing our hands with soap and water, wearing face masks whenever we are with other people and maintaining proper social distancing from others.

“We also must not forget the various advisories the Oyo State COVID-19 Task Force has issued regarding what to eat to boost our immune systems.

“Sometimes, even after following all directives, we may still get the virus. When this happens, we need to have our bodies ready to fight the disease,” Makinde tweeted.

He called on residents of the state with any symptoms of COVID-19 to visit any community-based testing centre near them or call any of the emergency operation centre’s numbers.

In another development, the Oyo State Government on Wednesday insisted that it supported the University College Hospital (UCH), Ibadan, with N118 million in the fight against COVID-19.

The state’s Commissioner for Finance, Mr Akinola Ojo, on Tuesday gave a breakdown of the state’s expenses on the COVID-19 pandemic.

He said that the state government had provided support to UCH and the Department of Virology located inside the hospital to the tune of N118million.

The management of UCH, however, refuted the state government’s claim, saying it collected no such sum.

But a statement issued on Wednesday by Mr Taiwo Adisa, the Chief Press Secretary to the Governor, quoted Ojo as insisting that the N118 million was expended in meeting the varied needs of the Department of Virology, College of Medicine and UCH.

Ojo, according to the statement, said attempts by the management of UCH to disown the Department of Virology, a teaching and research department in the College of Medicine, University of Ibadan and which provides Clinical Services to UCH, ” is self-serving, artificial and contemptuous.”

”The state government is of the view that attempts to create thin lines between the Department of Virology, College of Medicine, which provides Clinical Services to the UCH and operates from the same premises as the hospital, amount to being clever by half.

“Staffers of the department hold identity cards of the UCH and that of the University of Ibadan, even as the department remains the only one that undertakes virology-related assignments for the UCH,” Ojo said.

The statement quoted the commissioner as saying that the state had also provided medical supplies to UCH.

The medical supplies, Ojo said, included 500 each of goggles, protective gowns and face shields; 250 each of full protective, headcovers and shoe covers and 200 hand gloves to UCH amounting to N2 million, in the wake of the COVID-19 pandemic.

He said the state government also provided a revolving fund to the tune of N5 million to UCH for treatment of residents of the state who tested positive for COVID-19.

The commissioner added that the amount was being” topped” each time the hospital spent up to N4 million on the patients.

“That the supplier is just about to deliver the said items is an evidence of the protocols related to movement schedules of all items within the environment of a global pandemic,” he said.

He said the supplies included goggles, PPE gowns and boots, adding that the total amount spent in directly supporting UCH “based on the artificial distinction” so far stood at N32 million.

The commissioner said the balance of N86 million constituted what had been spent to support the Department of Virology, a direct partner with the state on the COVID-19 pandemic.

He said some of the items provided to support the Virology Department included PPE, SARSCoV-2 testing kits and extraction kits for COVID-19.

Others forms of support, he said, were wet lease of the testing machine for COVID-19, medical supplies and consumables as well as payment of allowances for the staff of the Virology Department.

“In order to clarify the referenced N118 million support, it is important to first of all state that we were made aware of a distinction between the University College Hospital (UCH) and the College of Medicine, University of Ibadan.

“Oyo State Government has provided support to both institutions during this COVID-19 pandemic,” he added.