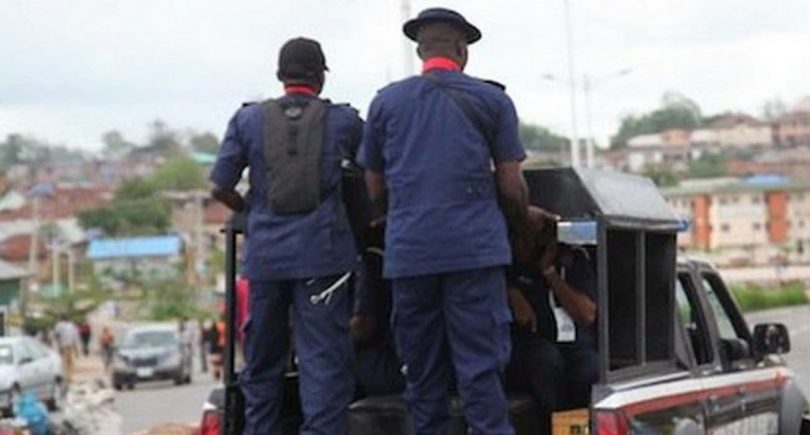 The Abia command of the Nigeria Security and Civil Defence Corps (NSCDC) says it has rescued a one-day-old baby girl from an Imo man, his accomplice, suspected syndicate members that allegedly specialised, in child trafficking in the state.

The state Commandant of the corps, Mr Nnamdi Nwannukwu, said this on Thursday in Umuahia, while briefing newsmen on the activities of the command in the last two months.

Nwannukwu said that the command arrested two suspects in Aba, the commercial hub of the state, in connection with the alleged plot to sell the baby from a baby factory in the city.

He said that the suspects, Michael Okeke, 37, from Abueke Etiti in Imo, and Amarachi Uche, 35, from Abaji Amafor in Ugwunagbo in Abia, were arrested following a tipoff from the command’s  undercover operative in Aba.

According to him, the operatives “overheard a telephone conversation between the suspects and supposed lady buyer in Umuahia for a deal to sell a day-old baby for N800,000 only.

“Following the tipoff, the gallant men of the command were quickly mobilised and swiftly arrested the suspected child traffickers.”

Nwannukwu further said that preliminary investigation showed that the baby was born on Sunday, May 31 in a baby factory, a day before the rescue.

He said that the suspects were saddled with “negotiating for buyers and general sales for the baby factory.”

“The investigation further revealed that the suspects have links with some notorious baby factory operators and traffickers in the state, who have been on the wanted list of the command,” he said.

The commandant said that the command had made adequate provision for the survival and upkeep of the baby.

He also said that the command had liaised with a government-owned hospital in Aba to provide necessary medical care for the baby from the date of rescue.

He said: “The baby was unduly exposed to harsh conditions without the necessary medical care, such as BCG vaccines for newborn due to the urgent arrangement to sell her at the agreed sum.”

He said that the command had begun investigation into the matter with a view to arresting and bringing other suspects, including the baby factory, involved in the crime, to book.

Nwannukwu said that the command had officially handed over the baby and suspects to the Enugu Zonal Headquarters of the National Agency for the Prohibition of Trafficking in Persons for prosecution.

In a related development, the commandant said that its operatives rescued nine Umuahia-bound passengers around 8pm on May 27, from the hands of armed bandits at Ntigha Junction on the Umuahia end of the Enugu-Port Harcourt Expressway.

He said that the commuter-bus conveying the unsuspecting passengers from Aba was attacked at the junction, when an alleged member of the robbery gang, said to have boarded the bus, requested to disembark.

Nwannukwu said that the suspects, now at large, struggled with the driver for the steering of the bus, overpowered him and drove the passengers into a bush and robbed them.

He said that following a tipoff, the command’s Rapid Response Team went after the suspects, who quickly took to their heels on sighting the operatives, leaving the passengers at the scene.

He said that the items recovered at the scene included a Hummer Bus, with Registration No. Abia KWU311XA,  a cellphone, suspected to belong to the fleeing bandits and some cash.

He said that the command was still on the trail of the suspects and hoped that they would be arrested and made to face the full weight of the law.

The NSCDC chief said that the command was also mounting strict surveillance around government infrastructure in the state, including oil pipelines, against vandalism.

“This is one of the core mandates of NSCDC and we make sure that we secure these infrastructures from vandalism and oil bunkering,” he said.

He, however, said that the spate of oil theft was on the decline, adding that COVID-19 lockdown and restriction in interstate movements hampered the activities of oil thieves.