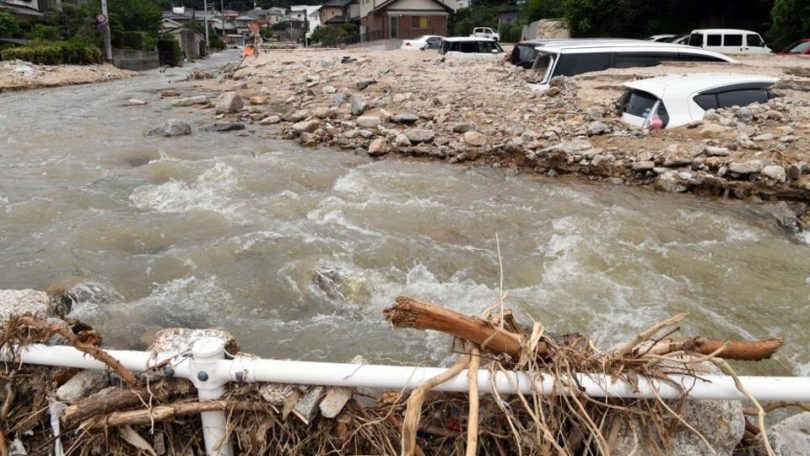 At least 20 people were dead and 14 unaccounted for while rescuers were rushing to find survivors in south-western Japan, where record-breaking torrential rains triggered landslides and flooding, local media reported on Sunday.

About 50 people were rescued from a flood-hit nursing home in Kuma Village, some 950 kilometres south-west of Tokyo, Kyodo News reported.

Authorities in Kumamoto ordered about 200,000 residents to flee their homes as they were still warning of torrential rains, mudslides, flooding and swollen rivers in the region.

The agency’s chief forecaster, Satoshi Sugimoto, said there is a chance that some areas of western Japan could see more rains than predicted.

A seasonal rainy front had dumped heavy rains in the prefectures of Kumamoto and Kagoshima since Saturday.

About 4,300 people in the affected areas still live in temporary housing.

In another development, a shooting incident at a nightclub in Greenville, South Carolina in U.S., early Sunday morning, left two people dead and eight wounded, the authorities said.

Some of those hurt were critically injured, though it was not clear how many, said Lt. Jimmy Bolt, a spokesman for the Greenville County Sheriff’s Office.

A sheriff’s deputy spotted people “running and ducking” outside the club, the Lavish Lounge, around 2 a.m. while headed to an unrelated call, Lieutenant Bolt said.

About 200 people were in the club at the time of the shooting, he said.

The rapper and representatives for the Lavish Lounge were not immediately available for comment on Sunday morning.

Those killed were identified as Clarence S. Johnson, 56, of Duncan, S.C., and Mykala Bell, 23, of Greenville. Both died at Greenville Memorial Hospital with gunshot wounds, the Greenville County Coroner’s Office said.

The authorities said they were looking for two people they did not publicly identify in connection with the shooting. It was not clear what led to the gunfire, but officials were considering the concert as part of their investigation, Lieutenant Bolt said.

Gov. Henry McMaster, a Republican, had ordered nightclubs and concert venues to remain closed because of the coronavirus and has not yet allowed them to reopen although the state lifted restrictions on retail stores, gyms and bowling alleys.

Lieutenant Bolt said it was possible that the club had appealed that order.