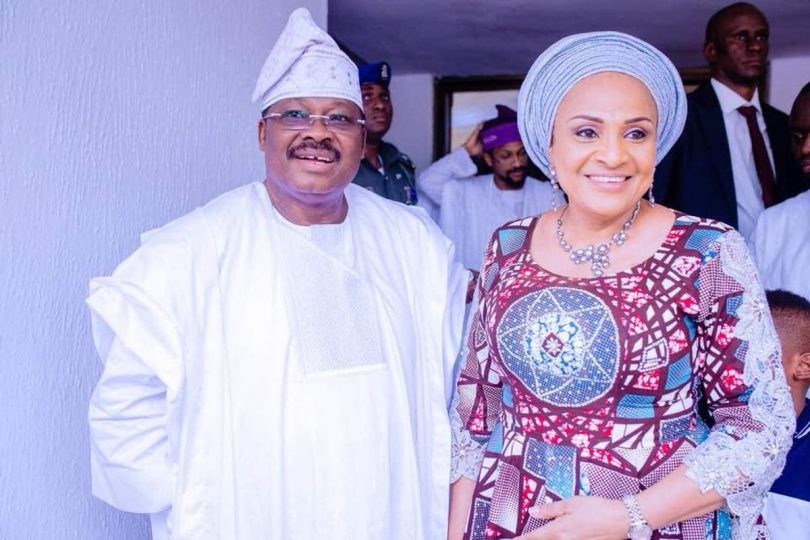 …As Cleric describes Ajimobi, as ‘once in lifetime’ leader***

The family of the late Oyo governor, Abiola Ajimobi, said on Sunday that it had no intention to bar the Deputy Governor of the state, Rauf Olaniyan, from the eight-day fidau prayer organised for the deceased. It nonetheless barred them.

Ajimobi’s former media aide, Bolaji Tunji, said this in a statement issued in Ibadan on behalf of the family, following the eight-day prayer held Sunday for the late two-time governor who died on June 25.

The family’s reaction followed reports that a delegation of the state government led by the deputy governor was barred from entering the venue of the event.

But Tunji, in the statement, said the family had no such plan to bar the government delegation.

He said the family was not aware that the deputy governor would attend the event, adding that neither the advance team nor the protocol unit informed the family.

The event, he added,  was held in compliance with COVID-19 protocols established by NCDC, noting that not more than 30 people were allowed at the venue.

Tunji added that the seats were arranged according to the number after which the gate to the premises was shut.

He said when the family got the information that the deputy governor had arrived, aides rushed to the gate to usher him into the sitting room only to learn he had gone, after waiting for several minutes.

The statement said in part: ” There is the need to clarify the believed presence of the Deputy Governor of Oyo State, Mr Rauf Olaniyan, at the 8th-day prayer of HE Senator Abiola Ajimobi,  the immediate past governor of Oyo State

“The Deputy Governor arrived after the prayer had started. The event was strictly a family affair.

“There was a need to comply with the Covid-19 protocol as established by NCDC- Social distancing, not more than 30 people in a place and seats arranged, accordingly after which the gate was shut.

“No one was aware that the Deputy Governor was coming as neither the advance team nor the protocol informed us.

“By the time we got to the gate to usher him into the sitting room, he had left. Everything happened within a spate of 10 minutes.”

Tunji said efforts were made through a serving senator and a former attorney general to get in touch with the deputy governor.

He maintained that the incident was not meant as a slight to the deputy governor as he could sit in a private sitting room provided by the family.

Tunji, who described the incident as unfortunate, however, apologised to the deputy governor.

Meanwhile, a Renown Islamic cleric,  Sheikh Muyideen Bello, on Sunday described the late former governor of Oyo State, Sen. Abiola Ajimobi, as a once in a lifetime leader who achieved all God wanted him to achieve.

The cleric made the remark during the eight-day fidau prayer held in honour of the late Ajimobi at the deceased Oluyole residence in Ibadan, stressing that the late Ajimobi was a rare leader who only comes around once in a generation.

“Ajimobi died a fulfilled man after having achieved all God wanted him to achieve.

“When Senator Isiaq Ajimobi entered Baitul -L- Atik(Kabba) in the Kingdom of Saudi-Arabia during the pilgrimage, he asked God to let him see 70 years, because no one in his lineage had seen it.

“He asked God to make him the first governor to serve two terms in Oyo State. He also asked God to grant him mercy to build a befitting mosque for Him.

“God granted all his requests. He died a fulfilled man,” he said.

The cleric said that an individual like Ajimobi was a special creation of God and a leader like him would not come around for another 50 years.

“He was a special being, we can never have a governor like him in Oyo State who had done so well until the next 50 years,” he said.

He recounted his various encounters with the late Ajimobi, where he emphasised how he longed to break the family jinx of living beyond 70 years.

Bello in conjunction with other notable Islamic scholars and clerics led the gathering in series of prayers for the repose of the soul of the late Ajimobi.

Among the family members present are the wife of the deceased, Florence, children, grandchildren and aides of the late former governor.