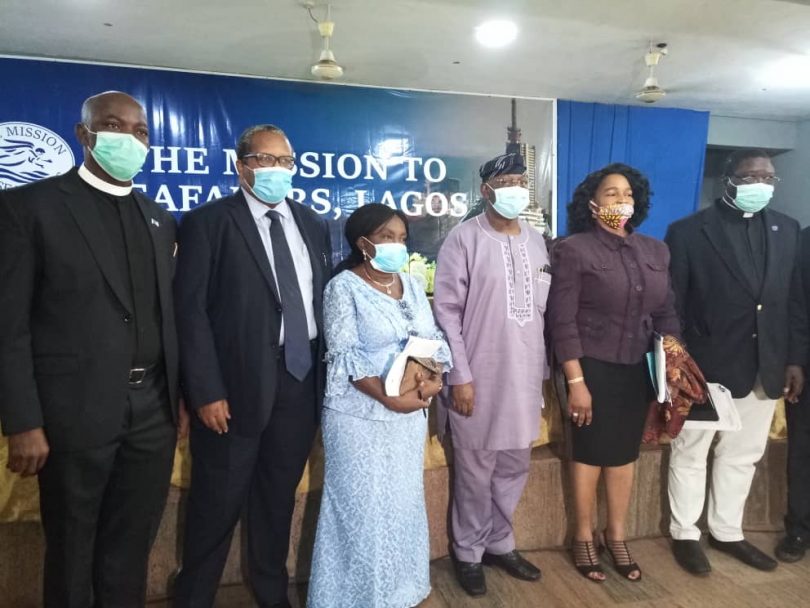 …As Sarumi urges Nigerians to think also of Seafarers, not only Cargoes!***

The Chairman, Mission To Seafarers Lagos (MTSL), Chief Adebayo Sarumi reiterated his commitment towards improving the welfare of seafarers in Nigeria, noting that while most Nigerians pay all their attention to cargoes only a few people think of those helping to deliver them.

A revered Ibadan High Chief and former Managing Director, Nigerian Ports Authority, Sarumi made the pledge during a briefing in Lagos,  even as he noted that, over 3, 000 ships berth in Lagos yearly, with 80 per cent being foreign-flagged, while 85 per cent of the goods and services one sees around, come by sea.

“The delivery of these goods by sea is often taken for granted because of the consistent flow of trade. Even during the pandemic period of Covid-19, maritime trade remains an essential service and seafarers essential workers.

“The sad irony is that while most pay attention to the cargo, few ever ask, who delivers them?

”The seafarers are the ones carrying the most important and precious cargo of all while the men and the women that work assiduously to sustain our precious maritime trade are the invisible hands that propel nations to sustenance, survival and the superlative.

“They are also the most overlooked aspect of the value chain; their welfare often trivialized.

”Seafarers welfare is a hydra-headed challenge. It has institutional, political, cultural and social nuances, to name but few, and the responses to the narrative are diverse,” he said.

Sarunmi, on behalf of the committee, however, acknowledged various organisations, institutions and administrations that had continually taken on the plight of the seafarers.

He said that MTSL, on its part, was poised to ensure the ball does not drop.

Sarumi said that the Mission’s strategy was to upgrade and upscale the centre’s facilities to some modicum of acceptable standards.

He sought collaboration with both national and International progenitors as well as maritime industry friends and allies in putting up a world-class MTS facility in the Seafarers Centre in Apapa.

Sarumi commended the support and prayer offered for them by the Diocese, the Bishop of Lagos, the Right Reverend Dr Humphrey Olumakaiye as well as other stakeholders in the maritime industry.

The chairman described the Mission in Lagos as an international, humanitarian and Non-Governmental secular organisation dedicated to the welfare of seafarers regardless of sex, creed, belief, race or political disposition.

The mission, according to him, is one of over 260 Mission to Seafarers (MTS) stations operational across the globe, with its global mantra of “Caring for Seafarers around the world”.

Sarumi said that MTSL had the advantage of being the first seafarers’ welfare institution in the country.

“This briefing initiates our Mission Week. Until the COVID outbreak, it was intended to be a week-long series of events to further endear our various stakeholders to the seafarers’ community.

”On Thursday, July 9, high-end advocacy will be at play as we shall be hosting a global virtual Seafarers seminar (Webinar) with the Theme, ” Seafarers Welfare: Are we missing the boat? ”

”We hope to visit some maritime institutions and intimate them of our vision while we hope to cap Mission week on Sunday July 12 with a Thanksgiving Service, which will also be broadcast online,” he said.

Meanwhile, taking members, special guests and media around the Seafarers center at GRA in Apapa, the treasurer to the Mission, Mr Igho Dafinone, listed the facilities to be put in place such as swimming pool, library, canteen, bar and guest house.