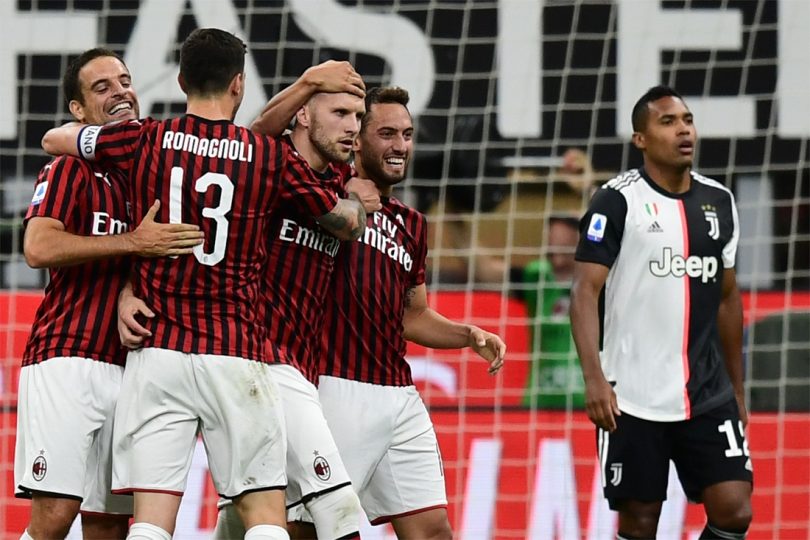 AC Milan scored three times in five astonishing second-half minutes as they hit back from two goals down to beat visiting Serie A leaders Juventus 4-2 on Tuesday.

The result means these were the first points dropped by the Turin side since the season restarted last month.

Juventus appeared to be cruising to another win when Adrien Rabiot put them ahead with a solo goal two minutes after the break.

Cristiano Ronaldo added a second with a typical effort, his 26th league goal of the season.

But Juventus collapsed after Zlatan Ibrahimovic pulled one back with a penalty kick in the 62nd minute.

Franck Kessie equalised four minutes later and Rafael Leao put them ahead one minute after that, before Ante Rebic completed the scoring in the 80th minute.

In spite of the defeat, Juve on 75 points stayed seven points clear with seven matches to play after second-placed Lazio earlier lost 2-1 at lowly Lecce.

AC Milan climbed to fifth with 49 points, although they are still 14 points adrift of the top four.(

They came from behind to beat Norwich City 2-1 at Vicarage Road.

Former England international Welbeck scored his first league goal for Watford since joining at the start of the season in the 56th minute.

It proved the winner as they moved four points clear of the relegation places with four games remaining.

Norwich, who took a fourth-minute lead through Emiliano Buendia, remain rooted to the bottom.

They are virtually condemned to returning to the Championship after losing for a sixth league game in a row.

Their advantage lasted only six minutes before Craig Dawson equalised to get Watford back in the game.

They are now on their way to a first league win since ending Liverpool’s unbeaten run in February.

Watford still have some difficult games ahead but will see success over Norwich as a major boost to their hopes of staying up.

Norwich manager Daniel Farke admitted before kick-off his side had little hope of remaining in the Premier League.

He added that they could have that officially confirmed on Saturday when they host West Ham United.

Yet, they did score for the first time in the league since its restart after it was suspended due to COVID-19.

That was when the pace of Onel Hernandez stretched the home defence to allow Buendia to bend a left-footed shot into the net.

It did not take long, however, for their defensive frailties to show as they first gave away a needless free kick.

They then allowed Watford centre-back Dawson to force his way to the back post to head home easily.

The winner came at the end of a quick breakaway by the home side, driven down the right by Ismaila Sarr.

His cross struck a defender and bounced up for Welbeck with his back to goal.

His bicycle kick was one of the best finishes of the season.

Norwich could have equalised five minutes from full-time when substitute Adam Idah missed from close range.

Watford are at home again on Saturday against Newcastle United.