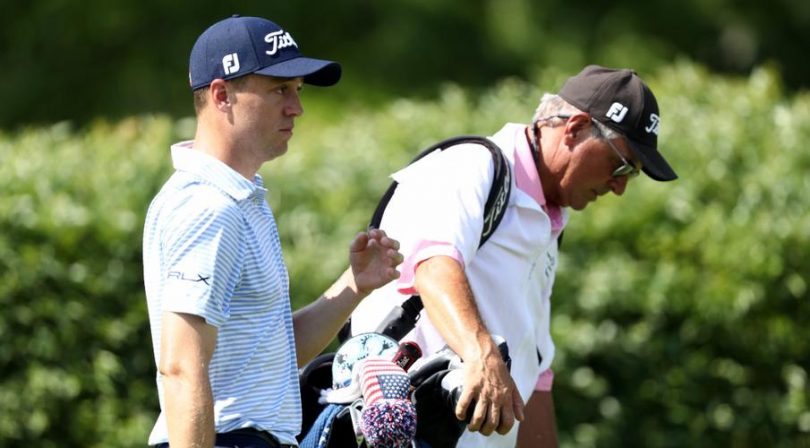 It was dad to the rescue in the third round of the Memorial tournament on Saturday when Mike Thomas picked up son Justin’s bag after his caddie fell ill.

It all happened on a steamy, hot day at Muirfield Village Golf Club in Dublin, Ohio.

With no spectators at the PGA Tour event because of COVID-19 health and safety regulations, world number three had few options when regular bag man Jimmy Johnson began feeling dizzy.

After hitting his tee shot on the 13th, Thomas said he turned around and there was his father on his bag.

“Just to make sure that he’s okay versus both of us worrying about it out there, and I hit my tee shot and I came out and Jimmy was gone and my dad was there.”

After taking a double-bogey at the 12th, dad brought Justin a boost and he hit back with a birdie at 13.

Also read:  No roars as Tiger makes return to sounds of silence

But it seemed father doesn’t always know best as Justin went bogey, double-bogey, bogey from the 15th before signing off with a birdie at the last for a three-over 75.

“It was fine,” said Thomas with a shrug after a performance that leaves him on even par going into Sunday’s final round, 12 shots back of leader Jon Rahm.

“I didn’t make those bogeys because my dad was caddying, it was just poor execution.

“But yeah, I mean, in a couple of weeks or one day, nobody will remember it. But right now, yeah, it’s a bummer.”

While it was a strange moment, it was not the first time Mike Thomas has stepped in as late replacement caddy.

The same thing occurred in 2018 at Kapalua when Johnson left with flu.

“Fortunately I was out there (today) following because, with this lack of spectators, it would have been hard to find somebody.”