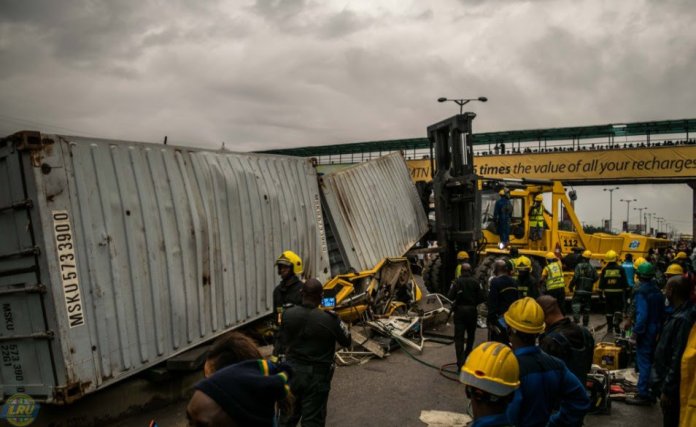 A 20 feet container fell on a commercial bus at Ilasamaja, on the Oshodi-Badagry Expressway on Sunday, killing at least, two persons and seriously injuring three others.

Oke-Osanyintolu said those who died were identified as a male and female, noting that when the LASEMA Responder got to the scene,  it discovered that a truck with registration number SGM 715 XA and loaded with a 20-ft container had collided with a commercial bus discharging passengers under the bridge at Ilasamaja at about 7p.m.

Oke-Osanyintolu said the impact of the fallen truck led to the immediate death of two passengers.

He added that three other passengers, including the bus driver, were rescued with injuries and had been transferred to Isolo General Hospital by LASEMA’’s Responder.

”The dead and the injured had been transferred to Isolo General Hospital by LASEMA Responder,” he said.

He said that the Lagos State Transport Management Authority and the police were involved in controlling traffic in the area.

In another development, Niger State Government has commiserated with the people of Suleja and Gurumana in Shiroro LGA of the state, over flood disaster and boat mishap that claimed 10 lives.

In a statement on Sunday in Minna, Mrs Mary Noel-Berje, Chief Press Secretary to the Governor, said that the government was disturbed by the incidents.

She urged all residents of the areas to adhere strictly to government advice on temporary relocation and clearing of drains to avoid a repeat of the ugly incident.

On the boat mishap in Gurumana Community in Shiroro LGA, the official said that it was regrettable.

She said that the government was not relenting in efforts to end banditry.

She added that security agencies had been adequately mobilised to ensure the protection of lives and property.

The chief press secretary appealed to NEMA to urgently intervene to reduce hardship faced by the people of both communities.

The government had, on July 13, appealed to communities around river banks, particularly the flood-prone areas and those situated on the tributaries of River Niger to be cautious and pay attention to the rising water levels in their areas.

NEMA, NIHSA, and NIMET had earlier predicted that some local government areas of the state and other states fall within highly probable flood-risk areas for 2020.