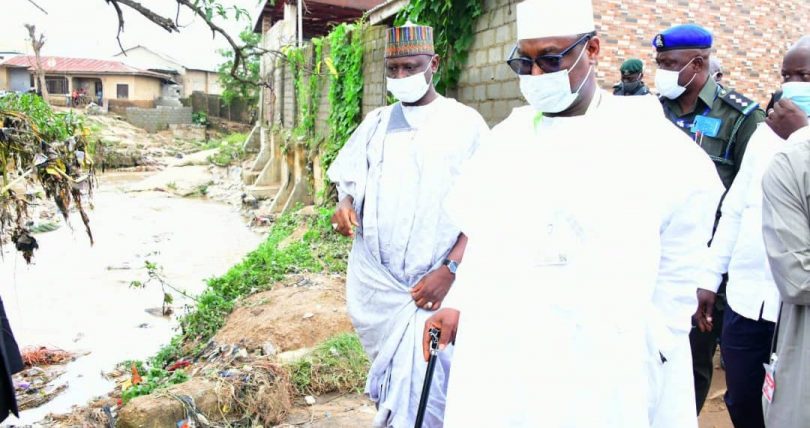 Gov. Sani Bello of Niger on Tuesday ordered the demolition of all structures built on the waterways in the major towns of the state.

The governor gave the order when he visited the victims of the flood that occurred in Suleja, where no fewer than 13 persons lost their lives, seven injured and properties worth millions of naira were destroyed as a result of heavy rainfall in some parts of Niger.

Bello described the incident as unfortunate saying that the disaster would have been averted if only the  people did not build on the waterways indiscriminately not minding the dangers involved.

He appealed to the residents to cooperate with the relevant environmental agencies that would be relocating them to safer places so as to avoid further reccurrence.

He disclosed that the government had come up with measures to avoid a reccurrence of the disaster such as, evacuation of refuse and desilting of water channels, expansion of culverts and opening up of alternative roads.

“We are saddened by this event that one family lost four children. What do you say to such parents, the best we can do at this point is to pray to God to guide and protect them and to give them the fortitude to bear their losses,” he said.

The governor also visited the Emir of Suleja, Alhaji Awwal Ibrahim,  to commiserate with him over the incident.

He intimated him with the measures government plans to adopt in averting similar incidents in the future as well as sought his support in educating the people to desist from building on the waterways.

Responding, the Emir described the incident as unfortunate despite several warnings from him.

He appealed to the state government to come up with a robust plan that would give the town a facelift.

Also, Sen. Sani Musa, representing Niger East Senatorial District, sympathised with the victims and disclosed that he had sponsored a bill on indiscriminate building on the waterways as a solution to flooding in the country.

He added that he had informed the National Emergency Management Agency (NEMA) of the incident with a view to assisting the victims so as to cushion the effect of the disaster.

They called on the residents of the state to always adhere to the government’s safety measures.

One of the victims, ThankGod Ebomara, said he lost four of his children to the flood and appealed to the government to come to his aid.