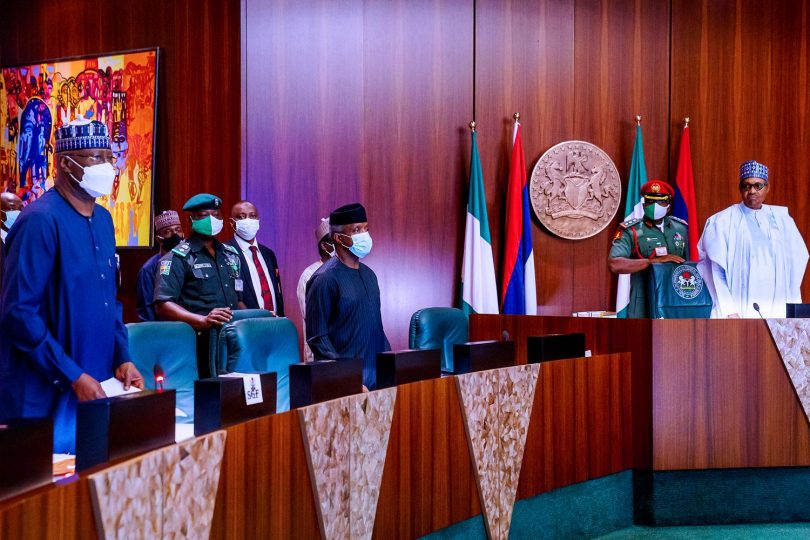 The Federal Executive Council (FEC) presided over by President Muhammadu Buhari on Wednesday approved the ratification of Air Transport Agreement between Nigeria and the United States of America (USA) as well as Siemens Power Project.

The Ministers of Information and Culture, Alhaji Lai Mohammed and that of Finance, Budget and National Planning, Zainab Ahmed, disclosed this when they briefed State House correspondents at the end of the virtual Council meeting in Abuja.

According to the minister of information, the air transport bilateral agreement is to strengthen economic, social and cultural ties between Nigeria and the USA.

Mohammed, who stood in for the Minister of Aviation, Sen. Hadi Sirika, said:

“The Aviation Minister presented a memo today on the approval for ratification of the air transport agreement between the Federal Government of Nigeria and the United States of America.

“The minister sought council’s approval for ratification of the air transport agreement between USA and Nigeria.

“You will recall that both United States and Nigeria are parties to the Chicago Convention on Dec. 7, 1994. Article 6 of the convention actually urges parties to sign air services agreement with member states to improve social, political and economic ties.

“The US has ratified its own and Mr President and council graciously accepted today to also ratify this agreement.

“So, today, Mr President signed valid agreement of air transport service between Nigeria and the US with the attendant benefits for both countries, especially as Nigeria is working towards having its own full national airline.

“So, we will now take advantage of this air transport bilateral agreement to strengthen economic, social and cultural ties between the two countries.”

On her part, Zainab Ahmed revealed that the Council ratified President Buhari’s anticipatory approval of 15.2million euros offshore and N1.708billion onshore as counterpart funding for the execution of Siemens Power project in the country.

She said the affected power project under stage one of the Presidential Power Initiative, was designed to include 23 transmission initiatives as well as 175 separate transformative projects in the electricity distribution franchises in the country.

“This is towards the counterpart funding for the bilateral from German Consortium guaranteed by the German government through Euler Hermes to finance the implementation of the end to end grid modernization and expansion programme.

“So, today at council, we discussed stage one of phase one of this project under presidential power initiative.

“This project is designed to include 23 transmission initiatives as well as 175 separate transformative projects in the electricity distribution franchises that we have in the country,’’ she said.

The minister stated that the project would also support the regulator, Nigerian Electricity Regulatory Commission (NERC), to transition towards a programme of improving metering in the electricity industry in the country.

“Let me remind us as citizens that Mr President and his German counterpart met in Abuja in Aug. 31, 2018 and committed to jointly increase the capacity of the Nigerian electricity grid from the current capacity of 5,000 megawatts to 25,000 megawatts over a three-phased programme.

“After this meeting, an MOU was executed on the July 23, 2019 between the Nigerian Government and the Siemens AG with the German Government support.

“The MOU is designed to deliver this end to end modernization programme which we are calling the presidential power initiative,’’ she further maintained.

The minister explained that the presidential power initiative was meant to address the intractable problems that have bedeviled the Nigerian power industry over a period of years.

According to her, the project will be implemented in three phases as phase one has been approved by FEC today.

“The facility for this programme is to be sourced from the German consortium and it would be guaranteed by the German government through Euler Hermes covering 85 percent of the project cost, the highly concessional facility with two to three years moratorium, 12 years loan repayment period with an interest rate of liabor plus one per cent to liabor plus 1.2 per cent.

“And also the federal government is to provide 15 per cent counterpart funding as its contribution towards the project.

According to Ahmed, there is a provision in the 2020 revised budget for the government’s counterpart funding.

“The federal government is taking the loan from the German government with the plan to on-lend this particular loan to the distributing network.

“So, it’s a convertible loan facility to the DISCOs and we will be working with the DISCOs to restructure an appropriate loan agreement as soon as we are able to close out on this initial phase of the process.

“And council approved and ratified Mr President’s approval,’’ she said.

The Minister of Environment, Alhaji Mohammed Mahmoud, who also spoke on the outcome of the meeting, said the Council approved a revised New National Forest Policy.

“The old one (forest policy) was formulated in 2006. We realize that the old one is not catering for the current situation at hand. Forestry is a big sector of the economy.

“It provides a lot of employment opportunities, reduces poverty, and provides means of livelihood and foreign exchange from export of wood. Without sustainable forest management, you cannot have all of these benefits.

“It means taking out the emission out of our planet and stabilizing the temperature of the planet and the catastrophic effects of climate change.

“So, we have revised it and produced a new one. And we believe this will go a long way in regenerating employment which is an issue at hand,’’ he said.

The Minister of Industry, Trade and Investment, Mr Niyi Adebayo, said the Council ratified the Investment Promotion and Protection Agreement signed between Nigeria and Singapore in 2016 as well as Nigeria and the Kingdom of Morocco

He said: “We presented a memo to Council today, seeking Council’s approval for Mr President to ratify the Investment Promotion and Protection Agreement, which we signed in 2016 between Nigeria and Singapore on the one hand, and Nigeria and the Kingdom of Morocco on the other hand.

“In 2016, the Attorney-General of the Federation came up with a new model of Investment Promotion and Protection Agreement and that year Nigeria signed based on that new model between Nigeria and Morocco, and Nigeria and Singapore.

“Basically, the Council graciously approved that Mr President should ratify and the Attorney-General will present to Mr President for his ratification and the agreement will come into effect thereafter.’’