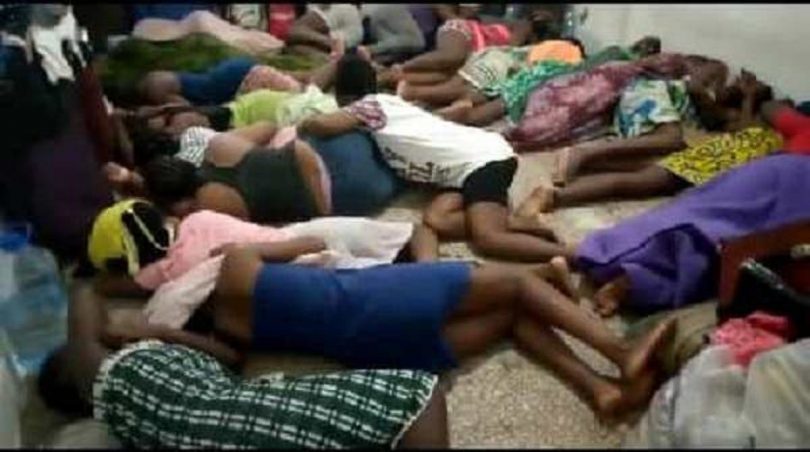 Some 30 Nigerian ladies trafficked to Lebanon are appealing to the Nigerian Government to rescue them as they are stranded in that country.

They made the appeal in a statement by the President of Journalists International Forum for Migration (JIFORM), Mr Ajibola Abayomi, and made available to the newsmen on Saturday.

Abayomi said that the message was being relayed based on an encounter with the victims, which necessitated the call for a speedy rescue action from government.

“JIFORM has forwarded details of the human trafficking agents involved in this matter to the relevant agencies and shall monitor it to the logical conclusion to ensure proper investigation and prosecution of those involved.’’

He said that the ladies were all camped in one room with faulty toilet and other utilities, and were presently housed in a building at Dawra city in Lebanon.

Abayomi said one of the victims, Miss Adebisi Comfort-Oluwatoyin with Passport No. number A10597908, disclosed to JIFORM that they had to escape from the inhuman treatment by their mistresses and hosts.

According to him, the 23 years old lady hails from Ondo State, graduated from the Edo State Polytechnic, Ekpoma, and was a resident in Osun State before departing Nigeria in December 2019.

“Help us plead with the Nigeria Immigration Service (NIS), National Agency for Prohibition of Trafficking in Persons (NAPTIP) and others to save us. The Nigerian embassy in Lebanon have tried but we want to go back home.

“Our belongings and international passports were seized with no payments for the service we have been rendering for months. They loosen and cut our hairs with razor blade.

“The police and their immigration are always on their side. We are not getting justice and our lives are in danger,” Abayomi quoted the victim as saying.

Abayomi said that the Executive Director, Rescue Africans In Slavery Organisation (RAIS), Ms Omotola Fawunmi, who spoke from the United States of America, also pleaded with government and other agencies to come to the victims aid.

Fawunmi who claimed she has been responsible for the upkeeps of the ladies stated that the victims are seriously suffering.

“The Nigerian government must act fast. Apart from this case, there are over 300 of them trapped in Oman and thousands across other Asian countries, beyond sustaining the ladies, we have facilitated the evacuation of thousands of human trafficking victims in the last few years,” she said.

“First, we want the ladies to be rescued as soon as possible. Their condition is very critical because they don’t have good shelter, food and they need urgent medical attention. My personal conversation with Comfort showed that they were really in a bad state at the moment.

“After rescuing the ladies, there must be thorough investigation and punishment for the agents and other human traffickers involved in this,” Henshaw pleaded.

In the meantime, the organised labour in Ekiti state, on Friday, said that there was no going back on its planned commencement of a three-day warning strike from Aug. 3.

The strike, according to the Nigerian Labour Congress (NLC), Trade Union Congress (TUC) and the Joint Negotiating Council (JNC), is to compel the state government to pay the outstanding salaries, allowances and pension arrears of their members.

They, therefore, directed workers across the state to proceed on the warning strike, after which, they said, a full-blown strike would follow if the government failed to accede to their demands.

The directive was made known via a statement jointly signed by the Chairmen of NLC, TUC and JNC, Kolapo Olatunde, Sola Adigun and Kayode Fatomiluyi respectively, and made available to the newsmen in Ado Ekiti.

Their demands also included unresolved issues surrounding unpaid benefits and non-implementation of the N30,000 minimum wage across the board.

Others are non-payment of leave bonus from 2015 till date as well as the arrears of promotions for workers at all levels.

“This warning strike, called by the organised labour in Ekiti, will commence on the midnight of Aug. 3.

“There is no commitment to all the outstanding deductions, such as cooperative money, loan repayment to banks, housing fund and others.

“Our demands also include five years leave bonuses, hazard allowances of COVID-19 to health workers, salary arrears and deductions, all yet to be paid.

“Based on the above, the strike will commence from 12 midnight of Aug. 3, except the government attends to our demands.

“We warn that no worker should go to work or listen to any directive from any quarters, except from the leadership of the organised labour,” the statement said.

It was recalled that Gov. Fayemi, had in the early days of his second tenure, promised the state workers of defraying the arrears owed them by the previous administration, totalling N57 billion within one year of his assumption of office.

Labour, however, claimed that the promise had remained unfulfilled by government, hence the current face-off between the two parties.