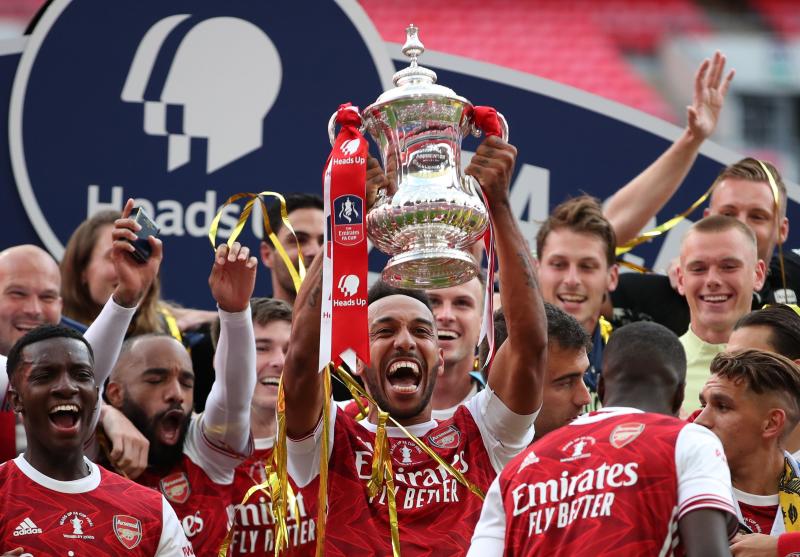 Arsenal skipper Pierre-Emerick Aubameyang scored twice to help his side secure a 2-1 win over Chelsea in the 2019/2020 English FA Cup final match on Saturday.

The win helped them to a record-extending 14th crown in the competition —— and a spot in next season’s UEFA Europa League.

He had left his role as Pep Guardiola’s assistant at Manchester City to replace Unai Emery in December.

With the contest locked at 1-1, Gunners striker Aubameyang danced past the opposition defenders before finishing with his left foot in the 67th minute.

It helped to ensure that Arsenal salvage European action from a difficult domestic season after finishing eighth in the 2019/2020 English Premier League (EPL).

Also read:  Moore to step down as Liverpool CEO next month

Chelsea had struck in the fifth minute when Christian Pulisic collected Olivier Giroud’s fine flick-on inside the penalty area and tucked the ball past goalkeeper Emiliano Martinez from close range.

Arsenal drew level from the penalty kick spot through Aubameyang in the 28th minute after Chelsea skipper Cesar Azpilicueta was booked for bringing down the Gabonese moments earlier.

Chelsea, who were forced to take off Azpilicueta and Pulisic due to serious-looking injuries, were reduced to 10 men after going 2-1 down.

That was when Mateo Kovacic collected his second yellow card of the game for a very soft foul on Granit Xhaka.