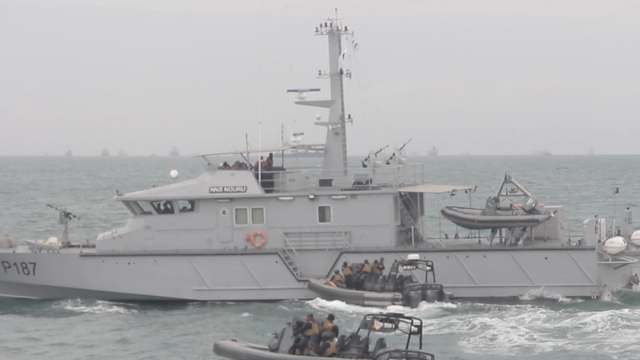 Only 11 days after the inauguration of Exercise OKUN ALAFIA II, the Nigerian Navy (NN) says the exercise has recorded laudable success, particularly with the arrest of some vessels, involved in illegal bunkering and other criminal acts.

He said that a vessel named MOTHER COMFORT was arrested by NNS OSE on July 24.

The Fleet Commander said that the successes were based on the collaboration between the Navy and the Maritime Domain Awareness (MDA) facilities which made vectore, intercept and interrogation easier.

He also said that four suspects were arrested along with 8x50litres  jerry cans filled with PMS in addition to several other empty jerry cans.

“These are other accessories used for siphoning PMS at various locations along the Atlas Cove-Ijegun NNPC pipeline.

“These arrests were made between July 27 and  Aug. 3 at Idi-Mango in Abule Glass Akaraba area,” he said.

He said that the Nigerian Navy would not relent in its efforts until it had provided the necessary and conducive environment for law-abiding members of the public to carry out their legitimate maritime-related business.

“Based on operation posture of Western Naval Command underlined by foregoing successes against perpetrators of criminalities within the nation’s maritime environment, I hereby restate that the Nigerian Navy will not rest to its oars until it has provided a necessary conducive environment for law-abiding members of the public to carry out legitimate their maritime-re business.

“May I further request that as partners in progress, members of the public are free to divulge credible information to the units in your localities to enable it to get rid of all forms of criminalities,” he said.

He said eight ships, two helicopters, and a detachment of NN Special Boat Service (SBS) participated in the exercise.

NAN reports that the Command had earlier engaged in a series of exercises and operations such as: OPERATION JUNCTION RAIN, EXERCISE SWIFT RESPONSE, EXERCISE ATEGUN ALAFIA, EXERCISE OKUN ALAFIA I, TREASURE GUARD II.