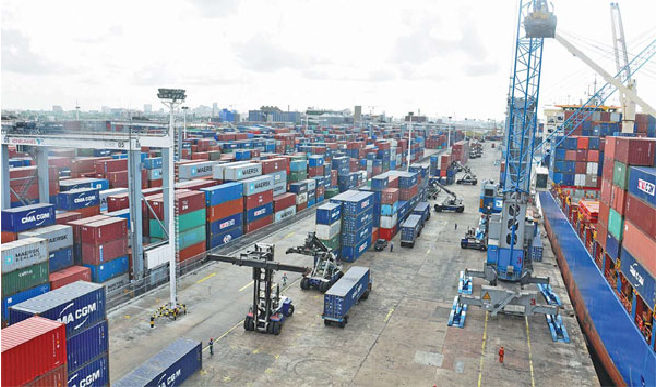 …Says their response was primarily to put the records straight!***
A corporate disagreement between two friendly key players, the Denca Bonded Terminal and the National Association of Government Approved Freight Forwarders  (NAGAFF) may be set to worsen, as the bonded terminal debunked earlier purported claim, that the terminal was shut by the latter, over alleged extortion.
Captioned “Denca Bonded Terminal Was Never Shut”, in a rebuttal made available to the Maritime First by Denca Bonded Terminal image-maker, Oby Nweke, the statement posited that the disagreement may not be unconnected with Denca management’s position to prevent the collection of some association fee, at the terminal
“Our attention has been drawn to an erroneous claim in some online news platforms by a group of self-styled rag-tag freight forwarders that they shut down our off-dock facility, Denca Bonded Terminal in Amuwo-Odofin, Lagos, on account of some spurious reasons advanced.

“We would not have bothered with dignifying their high-spirited mischief and blackmail aimed at de-marketing our facility but for the need to put out the correct information and let our customers know that we are open for services, and now better prepared and reinvigorated for value-added services in compliance with government’s regulatory guidelines and best business practices.

“It beats the imagination of well-groomed professionals in freight forwarding profession how unprofessionalism has been over-stretched to group- touting in the name of the association. More pathetic is their assumption of regulatory status, with its legal consequences and an illegal usurpation of the role of the legitimate ports economic regulator.

“For the records, the leadership of the National Association of Government Approved Freight Forwarders(NAGAFF) had engaged our management on their intention to begin the collection of some unapproved levies from our customers in the guise of compliance enforcement, but the moves were declined.  The management of the terminal while declining their highly illegal request, informed NAGAFF that their association does not have any right, power or authority to enforce the so-called compliance in any form, as they are not a government regulatory agency and is not known, recognized under any Nigeria law.

“Suddenly, they resorted to blackmail by assembling some touts in the name of a self-styled 100% Compliance team, who came to our terminal bearing placards with riotous inscriptions seeking to gain entry into the terminal in bid to start extorting money from Shippers and Agents, but they were resisted at the gate. They were informed that it’s only those that have legitimate businesses that are allowed unfettered access into the terminal. They went back and resorted to smear campaign.  So, at no point was the terminal shut, not even for one  minute

“Their claims of lack of capacity and paved floor are unfounded. Denca Bonded Terminal as one of the premier off-dock facilities in Nigeria was established in November, 2001 having met all the regulatory requirements and it has been re-inventing itself over the years to beat the competition and remain the flagship brand in the industry.  We don’t have cases of complaints arising from loss of cargo, item or damage of any kind.

“As at today in the terminal, we have four functional stackers – cargo handling equipment of different sizes, a paved floor of 5,000 Twenty-foot equivalent, TEU capacity with accessible roads, and experienced human resources to aid good turnaround time.

“As a compliant and patriotic corporate entity, we can only accept for collection authorized government levies in our terminal in order not to increase the cost of doing business in the nation’s port industry”, the Denca statement concluded.