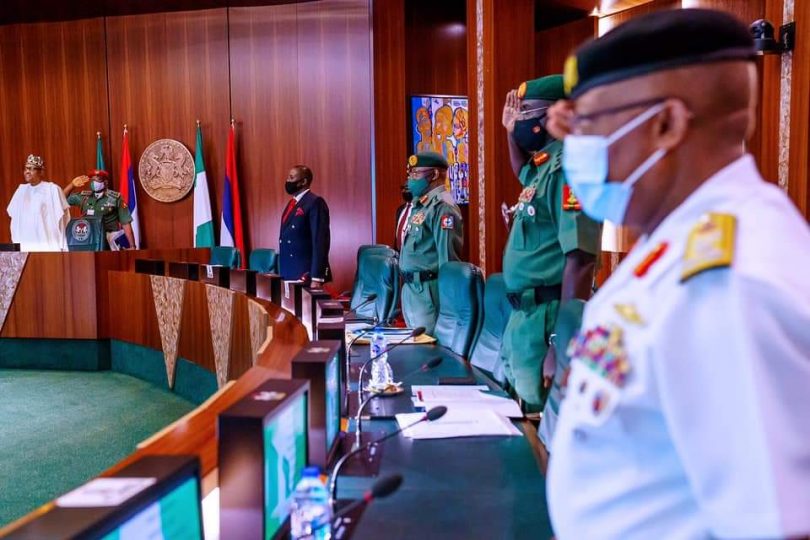 President Muhammadu Buhari has again challenged the nation’s security agencies to rejig their strategies in the ongoing battle against insurgency, banditry and other violent crimes in some parts of the country.

“We must bear in mind that we owe a duty to the people that elected his government, our government and at the end of the day without securing the nation all other things cannot be addressed such as revamping the economy and also fighting corruption.’’

According to the NSA, his office presented a memo to the Security Council on the danger of drug abuse in the society as well as the need to urgently address the problem

He revealed that between 2011 and 2019, approximately 17 manufacturing laboratories of dangerous substances were located by the various security agencies and destroyed while increasing activities of illegal cultivators of `Canabis’ were also recorded.

He said criminals had resulted to the use of illegal substances and dangerous drugs like Tramadol to unleash violence on innocent citizens in society.

“I presented two memos. The first had to do with drug trafficking as well as drug addiction in Nigeria, and the widespread use of these substances and the dangerous impact on our social, economic situation.

“Basically, what I told council was that this has taken on a worrisome dimension. Nigeria’s perception on the drug trafficking index has changed from the status from a transit hub to a production centre.

“Between 2011 and 2019, approximately 17 manufacturing laboratories of dangerous substances were located by the various security agencies and destroyed. That is a large number.

“At the same we have had increasing activities of illegal cultivators of Canabis in Nigeria.

“These people basically use extremely large space of arable land to cultivate this illegal substance, employing militiamen to protect their farms and also their storage facilities.

“When you look at drugs, our main concern as security operatives is the ultimate destruction to the social fabric and economy of the nation.

Monguno believed that the reckless use of these dangerous substances had a direct link to the insecurity being experienced across the country.

He, therefore, stressed the need for a collective, concerted effort to deal with the menace of dangerous drugs in circulation to safeguard the country from the bottomless pit of self-destruction.

The NSA boss disclosed that he later updated the Council on the security situation in the northwest and the north-central, “in terms of looking at the issue of kidnapping, banditry and killing of innocent people.’’

“The Chief of Defence Staff, the army chief, inspector general of Police, heads of the various intelligence agencies also gave synopsis each of the current security situation and what their various organizations and agencies are doing about these situations,’’ he added.