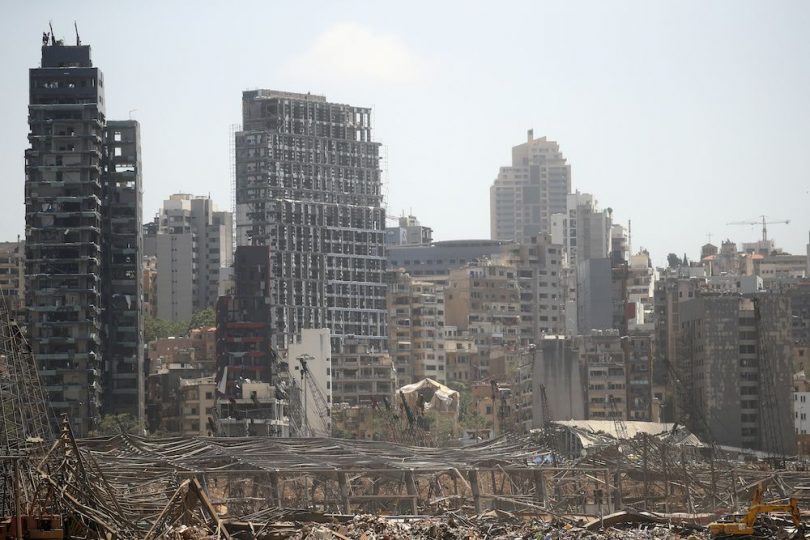 As Beirut mourned its dead and grappled with the scale of rebuilding after this week’s massive blast, some Lebanese angered by their government’s response called on foreign states on Saturday to topple their leaders and run the country.

Several hundred protesters began gathering in Martyrs’ Square in the city centre for a demonstration to criticise the government’s handling of the biggest explosion in Beirut’s history.

The blast in the port killed 154 people, injured 5,000 and destroyed a swathe of the city.

The protesters had mock wooden scaffolds with nooses, and one placard read: “Step down or hang”.

The government has promised to hold those responsible to account.

Some residents, struggling to clean up shattered homes, complain the government they see as corrupt, has let them down again.

There had been months of protests against its handling of a deep economic crisis before this week’s disaster.

“We have no trust in our government,’’ said university student, Celine Dibo, as she scrubbed blood off the walls of her shattered apartment building.

“I wish the United Nations would take over Lebanon.’’

Several people said they were not at all surprised that French President Emmanuel Macron had visited their gutted neighbourhoods near the epicentre of the blast this week while Lebanese leaders had not.

“We are living in ground zero.

“I hope another country would just take us over.

“Our leaders are a bunch of corrupt people,’’ said psychologist Maryse Hayek, 48, whose parents’ house was destroyed in the explosion.

Lebanon’s Kataeb Party, a Christian group that opposes the government backed by the Iran-aligned Hezbollah, announced on Saturday the resignation of its three lawmakers from parliament.

“I invite all honourable (lawmakers) to resign so that the people can decide who will govern them, without anybody imposing anything on them,’’ said party Chief, Samy Gemayel.

Gemayel announced the move during the funeral of a leading member of the group who died in the explosion.

Macron, who visited Beirut on Thursday, promised angry crowds that aid to rebuild the city would not fall into “corrupt hands”.

He will host a donor conference for Lebanon via video-link on Sunday, his office said.

The prime minister and presidency have said 2,750 tonnes of highly explosive ammonium nitrate, which is used in making fertilisers and bombs, had been stored for six years without safety measures at the port warehouse.

President Michel Aoun said on Friday an investigation would examine whether it was caused by a bomb or other external interference.

Aoun said the investigation would also weigh if the blast was due to negligence or an accident.

Twenty people had been detained so far, he added.

Some residents wondered how they would ever rebuild their lives.

Tearing up, Bilal Hassan used his bare hands to try to remove debris from his home.

He has been sleeping on a dusty couch besides pieces of splintered glass.

When his three wounded teenage children ran for their lives they left bloodstains on the staircase and walls.

“There is really nothing we can do.

“We can’t afford to rebuild and no one is helping us,’’ he said, standing beside a large teddy bear that was blown across his home and a damaged photograph of him and his wife.

Bulldozers ploughed through the wreckage of mangled homes and long rows of flattened cars as soldiers stood by.

Volunteers with shovels streamed through streets.

Danielle Chemaly said her charity organisation, whose headquarters was destroyed, had provided assistance to 70 families who were left homeless.

“We have given people initial help but we don’t know what we can do for families in the future.

“It requires major projects,’’ she said.

Officials have said the blast could have caused losses amounting to $15 billion.

That is a bill that Lebanon cannot pay after already defaulting on a mountain of debt – exceeding 150 per cent of economic output – and with talks stalled on a lifeline from the International Monetary Fund.

France and other countries have rushed emergency aid to Lebanon, including doctors, and tons of health equipment and food.

Arab League Chief, Ahmed Aboul Gheit, said after a meeting with Aoun on Saturday he would seek to mobilise Arab efforts to provide support to Lebanon.

For ordinary Lebanese, the scale of destruction is overwhelming.

“It felt like a mini atomic bomb,’’ said George Rohana, sitting beside a supermarket that was demolished.

“Now we have a situation where people are stealing metals and other items from the destruction,’’ he said.

“The other day someone walked away with a broken toaster.’’

Marita Abou Jawda was handing out bread and cheese to victims of the blast.

“Macron offered to help and our government has not done anything.

“After Macron visited, I played the French national anthem all day in my car.’’

In a related development, a Beirut judge has ordered the detention of the director of Lebanese customs and a port director, after the massive blast which ripped through the capital city’s port.

This is according to a report by the Lebanese National News agency.

Tuesday’s explosion killed 154 people and injured more than 4,000, according to the Health Ministry, with many still missing.

Lebanese customs boss Badri Daher, his predecessor, Shafik Merhi, and port director Hassan Kuraitim will reportedly be kept in detention as long as investigations into the disaster continue.

On Thursday, 16 people were detained in connection with the blast.

Rescue workers have struggled to remove large chunks of debris in the search for survivors and victims.

“Due to the massive damage we are seeing, we have doubts there are survivors, but we still have hope,” one rescue worker said.

The Lebanese Red Cross believes there are still 100 people missing, most of whom were working at the port.

“We are doing our best as we hope to find people alive and trapped, but all we have found so far are unrecognisable remains,” said a rescue worker who said he had been working non-stop for the past 48 hours.

A photographer who managed to enter the area described the scene as “catastrophic.”

“For the most part, nothing is left to see of Beirut port,” he said.

Hundreds of damaged cars, containers and buildings were flattened by the massive blast.

Georgia Pfleiderer, a media officer from the German technical relief organisation THW, reported that “the damage is immense. The buildings … are all in ruins.”

Cranes and bulldozers on Friday were attempting to move away large pieces of debris from the hangar that is believed to have housed the 2,750 tons of ammonium nitrate that blew up on Tuesday.

The dangerous material had been stored there for years.

A Health Ministry official said the toll could rise further as many of those injured were in intensive care.

Some 5,000 people were injured in the explosion.

The blast forced more than 250,000 out of their damaged homes.

Angry residents, including relatives of people who are still missing at the port, stood at the site shouting: “This government is a failure!”

“The blast took place on Tuesday and they are still working slowly.

“If people were alive and trapped under the rubble they are dead by now,” one protester said.

President Michel Aoun vowed that the government would find out what caused the blast and that “the investigation will include direct officials.”

Aoun pointed out that the incident could have been caused “by negligence or external interference by a missile or bomb.”

“Hezbollah is in charge of the port and the warehouse where ammonium nitrate was stored and nothing enters and exits the port or airport without them knowing,” he said.

“I declare and categorically deny that there is anything for us in the port: no arms warehouse, no rocket, no gun, no bomb, no bullet, no nitrate,” Nasrallah said in a televised address.

“Absolutely, (there is) nothing at present, the past or in the future. Investigations will prove it,” he added.

“Some are seeking to tell the Lebanese that Hezbollah is to blame (for the port blast).

“This is a false accusation,” Nasrallah said.

The massive explosion destroyed the homes of between 80,000 and 100,000 children, according to a preliminary estimate by the UN Children’s Fund (UNICEF).

More than 120 schools in Beirut were damaged and need to be repaired quickly before the start of the new school year, UNICEF spokeswoman Marixie Mercado told a press conference in Geneva.

“The (humanitarian) needs are immediate and they are huge,” she said.

World Food Programme (WFP) spokeswoman Elizabeth Byrs warned that the explosion in Beirut’s harbour could further limit food supplies and increase retail prices in a country that is already suffering from an economic crisis, as well as the effects of the COVID-19 pandemic.

– Reuters, with additional reports from dpa