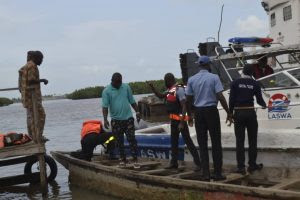 …We will no longer condone recklessness, carelessness ***

The General Manager of LASWA, Mr. Oluwadamilola Emmanuel, who disclosed this to newsmen on Saturday in Lagos.

Emmanuel said that the authority would not condone recklessness and carelessness from any operator.

He reiterated LASWA’s renewed commitment to ensuring the safety of ferry passengers in the state, warning that all ferry operators must play by the rules and regulations.

According to him, all the passenger ferries apprehended will be subjected to inspections while the operators will pay stipulated fines before the engines are released.

“It is no longer business as usual for erring ferry operators as anyone found wanting will be sanctioned appropriately.

“In the ongoing enforcement and monitoring exercise across the inland waterways by the Patrol Team of LASWA, we have seized eight boat engines belonging to commercial ferry operators.

“They were caught flouting safety regulations on the waterways by overloading, reckless driving, and not wearing life jackets among other offenses.

“We are going tough on the operators because this disregard to safety rules have resulted in preventable fatalities on waterways,’’ he stated.

Emmanuel said that the authority had been patrolling and inspecting boats around Mile 2, Kirikiri, Abule Osun jetty, Alex jetty, Liverpool, and Ebute Ojo in the Ojo area.

According to him, the patrol team has also been covering five Cowries’ Creek (Mekwe Bridge) and Ebute-Ero on the Island axis to ensure operators adhere to safety rules and COVID-19 prevention protocols.

The LASWA boss said that the authority was able to rescue a passenger boat in distress en route Ikorodu from Ebute-Ero within the period.

“The patrol team was able to help the boat and the passengers back to the jetty and into another boat while the faulty boat was taken to the LASWA office for inspection.

“The authority will not condone any action that goes against the safety of the state.

“All boat operators caught flouting the laws will be sanctioned.

“Their boat must pass the inspection test and a fine paid before their engines are released to them as a deterrent.’’.

There had been reports of accidents on waterways in Lagos in recent times, the latest happened on July 29, which claimed 10 lives.