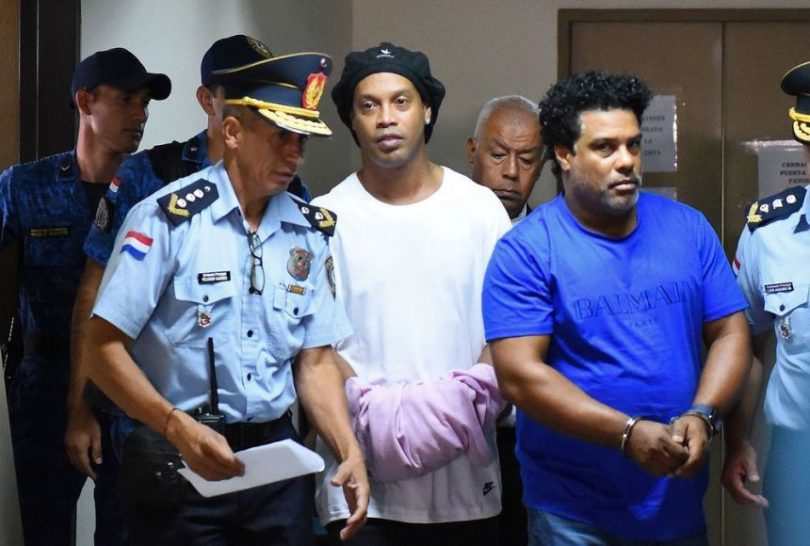 This came about when prosecutors said they would not oppose a “conditional suspension” of the case that would allow him to return to Brazil.

The twice World Player of the Year was arrested on March 6 along with his brother and business manager Roberto Assis after they tried to enter Paraguay with adulterated Paraguayan passports.

They were held in jail for 32 days before being conditionally released on April 7 after paying 1.6 million dollars in bail.

Ronaldinho, the former FC Barcelona, Paris St-Germain (PSG) and Flamengo player who turned 40 while in jail, has been held under house arrest in a Paraguayan hotel for four months since.

A document seen by Reuters on Friday, and also reported in Paraguayan and Brazilian media, seemed to exonerate both men.

According to it, prosecutors in the case said they found “no elements to prove that Ronaldo de Assis Moreira had direct participation in obtaining the irregular documents.”

They have recommended that Ronaldinho be released after paying a 90,000 dollars fine and identifying a fixed abode in Brazil.

He would also have to present himself to Brazilian authorities every three months.

Officials asked for a two-year suspended sentence and a 110,000 dollars fine for his brother Roberto but agreed to let him leave Paraguay.

They said that while Ronaldinho was unaware he was using an adulterated passport, Roberto knew.

Both men have said they were innocent and their lawyer has always maintained their detention was “arbitrary, abusive and illegal.”

The judge is expected to set a date for the hearing next week.

In another development, Cristiano Ronaldo scored a brace, including an unstoppable long-range goal, to give Juventus a 2-1 win over Olympique Lyonnais in the Champions League on Friday.

However, it was not enough as the French side reached the quarter-finals on away goals.

After both sides converted contentious penalties in the first half, Ronaldo struck from out of the blue on the hour but Lyon clung on for a 2-2 aggregate draw which sent them to next week’s Final Eight tournament in Lisbon.

They will meet Manchester City in a one-legged quarter-final.

The defeat left Juventus coach Maurizio Sarri in an uncomfortable position as the Champions League title eluded the Turin side for another season.

Although Juventus have won Serie A for nine seasons in a row, they have not been able to get their hands on the Champions League trophy since 1996 when they won it for the second time.

Despite continuing the domestic run, Sarri failed to give Juventus the flamboyant touch the club had been looking for as well as missing out on their main goal.

It was an uphill struggle for Juve from the moment they conceded an away goal in the 12th minute, albeit in controversial circumstances.

Rodrigo Bentancur appeared to get the ball cleanly off Houssem Aouar but referee Felix Zwayer pointed to the spot and chose not to look at the incident on the pitchside monitor.

Ronaldo saw a free-kick palmed away by Anthony Lopes but it was another controversial penalty which provided the hosts with their equaliser.

Miralem Pjanic’s free-kick struck Depay’s elbow in the wall and, although his arm was close to his body, the referee gave another penalty, again without consulting the pitchside monitor.

Juventus seemed to be making little progress after halftime until Ronaldo found space for a shot and blasted the ball past Lopes from 25 meters on the hour.

After that, it became almost a Ronaldo one-man show as he set up a chance which Gonzalo Higuain headed over, then headed over himself and drilled a free-kick into the wall.

But even he could not find the winner.