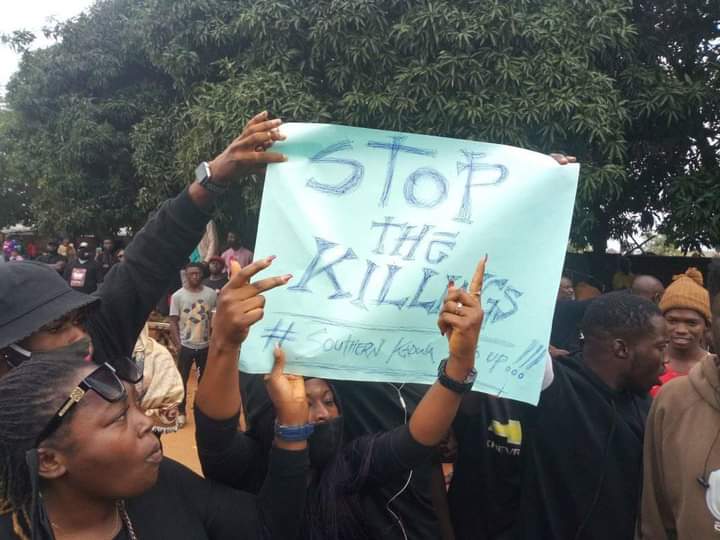 Some youths on Saturday protested what they called “the unabated killings in the southern part of Kaduna State”, a development they described as “very unfortunate” considering the presence of security personnel in the area.

Jagaba, the immediate past Youth Leader, Southern Kaduna People’s Union, told newsmen that the people were being killed even with the presence of security personnel deployed to maintain peace in the area.

He said: “We are here today to bring to public knowledge the ongoing killings in the southern part of Kaduna state.

“We want the public and the internal community to know the systematic attacks on southern Kaduna communities in spite of the curfew imposed in the area by the state government.

“There were series of attacks in recent times with huge a number of deaths being recorded, but up to now, there has not been any arrest.

“Only the victims are being arrested instead of the attackers, who find their way into the area … and carry out their barbaric acts unchallenged.”

Jagaba advised the government to take decisive steps to stop the killings to prevent a situation that could lead to total break down of law and order.

He dismissed reports making the rounds about the killings being reprisal, alleging that the attackers were “mercenaries hired” to cause trouble in the area.

“The government had imposed curfew in the areas under attack, thereby preventing people from going to their farms and keeping them in their houses only for the attackers to return and continue killing people freely unchallenged.

“Currently our farms have become empty … while we were locked in our houses in the name of curfew. Where is the justice?” he said.

The protest barely began when security personnel, led by the Divisional Police Officer, Sabon Tasha, Paul Timbushi swarmed the area to prevent the protesting youths from proceeding with the demonstration as planned.

The heavily armed security personnel, who arrived in no fewer than 15 vehicles, storm the area and began to confiscate placards from the protesters in a bid to stop the protest.

Correspondents at the scene of the protest, reports that three of the protesting youths were arrested, but were later released on the agreement that the protest would be discontinued once they were released.

It took several hours before the protesters were dispersed while the security officials remained on ground to ensure that the youth did not reconvene.

Attempts to get a response from the police failed, but a senior personnel, who did not want to be mentioned, said the security personnel was at the scene of the protest to ensure that there was no breakdown of law and order.

Meanwhile, the Arewa Consultative Forum (ACF ) on Friday urged the Federal Government to evolve ways of stopping the killings and insecurity in Southern Kaduna.

ACF’s National Publicity Secretary, Mr. Emmanuel Yawe made the call in a statement made available to newsmen in Kaduna.

He said that ACF was worried over the spate of insecurity and killings in the area, saying, “the federal government needs to muster the political will to tackle this menace.”

The publicity secretary urged the security agencies to step up their activities in the troubled areas in the interest of the people.

“The people are getting tired of unfulfilled promises and assurances from the security agencies, they need to rise up in defense of the people,” he said.

He also urged the people of Southern Kaduna to break the barriers of tribe and religion and work together to trigger lasting peace in the area.

The Kaduna State Government recently set up a white paper committee on the report of the investigative committee on Zangon Kataf riot of 1992.

The government had also imposed a 24-hour curfew in Chikun and Zangon Kataf local government areas.

In another development, a traditional leader in Iwaya, Yaba, Mr. Babatunde Adegbenro, says proper use of local vigilance groups would for now remain the most effective option, towards enhancing security in communities.

Adegbenro, who is the Oba-Elect of Iwaya, Yaba, said on Friday night at the Palace in Iwaya that such vigilante groups should be an integral part of the community policing system.

He told the newsmen that the effort of a vigilance group in Ijebu-Ode recently helped in locating member of a family resident in Iwaya after he had gone missing.

“Some days ago, I got a call from the Ijebu-Ode chairman about a missing boy who had been discovered in his community claiming to live at No 8, Yeye St, Iwaya.

“I ordered my chief to the address and discovered that a young man had actually been missing for weeks and that was how the family was reunited,” he said.

He said that it was the interaction between the chairman and the vigilance group that led to them finding the boy in the early hours of the day on which he was located.

“Also, the synergy between the representative of the two states made it possible for the missing young man to be found.

“I thank the chairman and the vigilante for their prompt response in attending to the case.

“I call on more synergy among the western communities and the country as a whole in promptly solving dire situations regarding security,” he said.

Adegbenro called on the government and communities to make proper use of such groups because of the role they play.

Also speaking, the Ijebu-Ode Local Government Area (LGA) Chairman, Mr. Olugbenga Olugbile, who was at the palace, said that such vigilance group members lived in the community and were closer to the people.

“They also have a better understanding of the topography of the area, making it easy for them to carry out successful operations when they are needed,” he said.

“Community policing is a good idea but when it has been properly endorsed, it should be an upgrade of the existing vigilance structure in place,” the chairman said.

Meanwhile, 18-year-old Nestor Agbelesesi, who had been reunited with his parents, said that he went to fetch water on a certain day and suddenly started hearing strange voices giving him directions.

He said that he ended up walking about and he later found himself at Ikorodu, and then Ijebu-Ode.

“I thank God for divinely bringing me back home through the chairman and King-elect of Iwaya Land,” he said.

Agbelesesi was grateful for their actions and appreciated the token of gift given to him and his family by Adegbenro.

Mrs. Olorunkpemi Agbelesesi, the mother, said that her son had been taken for proper medical evaluation and testing which was still ongoing.