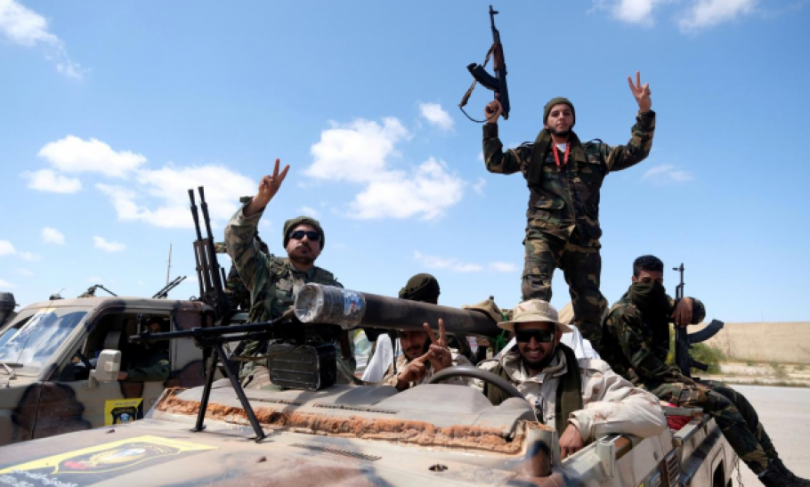 Germany, France and Italy plan to push ahead with a bid to use European Union sanctions to stem the continuing supply of arms to war-torn Libya, EU said on Monday.

EU sources told dpa that the three countries have agreed on a list of companies and individuals providing ships, aircraft or other logistics for the transport of weapons, in violation of a United Nations embargo that has been in place since 2011.

“Three companies from Turkey, Jordan and Kazakhstan as well as two individuals from Libya are involved,’’ the sources said.

In mid-June, the three EU countries warned they are prepared to apply sanctions on those violating the UN embargo.

“We are prepared to consider a possible use of sanctions if infringements against the land, sea and air embargo continue,” the countries’ three heads of government wrote in a joint statement.

They wrote without naming a state or entity which could be the target of the measure.

It has since become a battleground for rival proxy forces.

A solution to the conflict would be important for Germany, France and Italy, because smuggling gangs bringing migrants illegally across the Mediterranean Sea to Europe benefit from the chaotic situation.

In another development, Iran has rejected as “unrealistic”, a call by the Gulf Cooperation Council (GCC) for the United Nations to extend an international arms embargo on Tehran that ends in October, state TV reported on Monday.

On Sunday, the GCC, made up of Bahrain, Kuwait, Oman, Qatar, the United Arab Emirates and Saudi Arabia, said that Iran’s continued interference in neighbouring countries made an extension necessary.

“The GCC is currently at the apex of its incompetence and its unrealistic policies have rendered it ineffective.

“The council, swayed by the wrong and destructive policies and behaviour of certain member states, has turned into a mouthpiece for anti-Iran elements inside and outside the region,’’ Iran’s Foreign Ministry spokesman, Abbas Mousavi, told a televised news conference.

Recently, U. S. Secretary of State, Mike Pompeo, said that the UN Security Council will vote this week on a U.S. bid to extend the arms embargo on Iran, in spite of warnings by some diplomats that the measure lacks support.

Meanwhile, if the U.S. is unsuccessful in extending the embargo, it has threatened to trigger a return of all UN sanctions on Iran under a process agreed in the 2015 deal.

In May, Iranian President Hassan Rouhani threatened a “crushing response’’ if the embargo on Iranian trade of conventional arms was extended.

Iran has breached parts of the nuclear deal in response to the 2018 U.S. withdrawal and Washington’s re-imposition of sanctions.

dpa with additional reports from Reuters