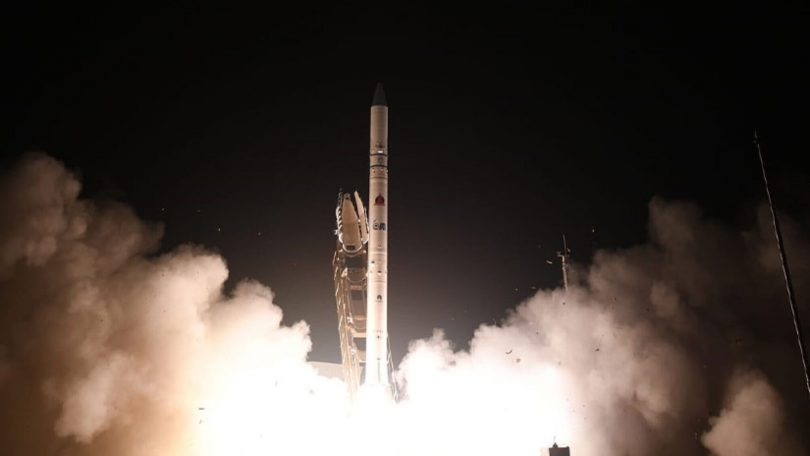 Before the break of dawn on July 6, Israel upgraded its spy satellite capabilities by a considerable degree after successfully launching the “Ofek 16” satellite into space from central Israel. The satellite is designed to boost Israel’s ability to monitor the dangerous activities of its adversaries throughout the Middle East, including Iran and Hezbollah.

Such launches would not be possible without the participation of the Manor Division of Rafael Advanced Defense Systems, which develops and produces space propulsion technology.

“We deal mainly with two technologies for space. One is space propulsion, and the second is composite space structures [for securely affixing the satellite’s cameras],” he said.

Propulsion in space must be extremely reliable, as any error could cause a catastrophic mission failure and see fortunes wasted, including the money spent on the launch. The responsibility to get every last detail right rests on the shoulders of Manor Division personnel.

A rendition of one an Israeli satellite produced by the Manor Division of Rafael Advanced Defense Systems, which develops and produces space propulsion technology. Credit: Courtesy.

The first type of propulsion is active for around 15 minutes. The second type can extend for up to 15 years—or the length of the satellite’s lifespan, said Shimshon.

“The third stage of the launch engine functions when it’s in space. This stage is made by Rafael. It was developed here, and the technology is highly advanced. When operating an engine in space, the weight is very important. The less the engine weighs, the more satellite you can bring up. The goal is to make more weight available for the satellite,” he explained.

This involves the use of light metals that act as a container for the solid fuel used in this stage of the launch.

“Rafael’s specialty is propulsion in space itself. The shape of the satellite’s engine must be designed in a special manner. The exit cone design is very challenging, technologically,” said Shimshon.

The fuel used for this type of propulsion is called hydrazine, a liquid that creates many safety challenges. “We have the means to function with this material. And its great advantage is that can easily break apart with a catalyst and create a jet stream; this creates the momentum,” he added.

“We have a lab that is a simulations center. There, we check every engine to see if it passes our tests,” said Shimshon.

The simulator is only one of few such facilities that exist in the world that specialize in the use of hydrazine as a fuel in space. “This chemical propulsion system keeps the satellite maneuvering throughout its life. The valves open up for mini seconds, and this must happen millions of time during the mission. This is the technology we developed so that this satellite can conduct all of its missions over time,” he stated.

The concept is similar, at its most simple level, to a balloon emptying itself of air as it flies through a room. But applying this kind of propulsion technology in space is enormously complex. The satellite engines are not always on, but instead only activated when momentum is needed, like a change of orbits.

Bringing up the right amount of fuel is also critical.

“Because orbits naturally change and have to be corrected over time, if you don’t have enough fuel, the satellite will burn up in the atmosphere,” said Shimshon. “We market many of these fuel containers to clients abroad.”

Working on the next generation of systems

Meanwhile, the Manor Division’s composite structure holds the satellite’s camera in place, which feeds intelligence agencies with vital information on activities of interests on the ground.

“The material is very stable in the face of the extreme temperatures encountered in space,” said Shimshon. “If this did not happen, the structure becomes distorted and that, in turn, can distort the images. The structure’s stability is what allows the camera to provide good resolution.”

During launches, company representatives arrive in specialized suits to conduct the fueling of the satellite and the launcher. This is a highly sensitive process, and the most miniscule glitch can destroy the entire satellite. “Our team gets its oxygen from another location as it conducts the fueling. It operates steps by step in line with the procedures and under the guidance of a controller,” said Shimshon. “There are few companies in the world that can provide this service.”

Rafael’s Manor Division has exported engines and containers to customers worldwide; today, there are 77 satellites in space with the division’s products. “We supply leading companies in this area in Europe. We recently completed our first export project, of a fuel container for a satellite, to the U.S.,” added Shimshon.

Looking ahead, the company has been developing electric propulsion systems that are generated using the sun’s energy freely available in space. “The efficiency is five times higher than chemical propulsion,” he said.

Currently, a satellite jointly made by Israel and France, launched in 2017, is in space with a Rafael-made electric propulsion system, which photographs agricultural fields. “Now, we are working on the next generation of this—making the propulsion system more compact and efficient,” said Shimshon. Here, too, we seek to export to the world.”