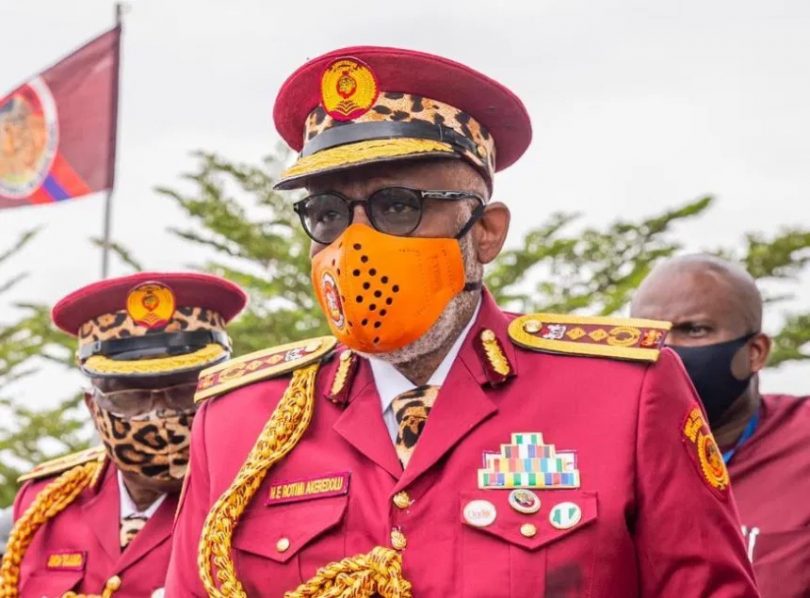 … As Police arrest 3 for allegedly robbing fishermen of N1.6m in Lagos***

Gov. Oluwarotimi Akeredolu of Ondo State has called on other governors to support community policing in order to reduce the rate of criminality in the country.

Akeredolu made the call during the passing out ceremony of 192 pioneer members of the Ondo State Security Network Agency (Amotekun corps officers) on Tuesday in Akure, just as Police in Badagry, Lagos, on Tuesday said they had arrested three robbery suspects who allegedly robbed three fishermen of N1.6 million and other valuables at Gberefu beach in Badagry.

The governor explained that Amotekun corps was purely borne out of the need to explore other means of securing communities and protecting those doing legitimate business within the South-West zone.

“For the umpteenth time, the Amotekun corps is not an independent regional outfit but a complementary efforts by the governors of the South-West to engender unity, peace and security.

“It is to support exiting security framework in the state toward ensuring the protection of life and property of all residents.

“Let me encourage other governors in the South-West and other parts of the country to join the crusade for the establishment of community policing.

‘The Nigeria Police has said they have started. Let us all support them. It is important and the way to go, and the best thing that will happen as far as intelligence-based policing is concerned is to have community policing.

“Somebody from Maiduguri cannot gather intelligence from farmers here, it won’t work.

“It must be encouraged by all. The National Assembly must also do its part by addressing the issue of security as a matter of urgency in the country,” he said.

Akeredolu, who said that the conventional policing system needed to be revamped and strengthened, explained that it had become imperative for the government at all levels to invest a lot in security for them to be effective.

“We all see what is happening in the North-East part of this country, something has to be done.

“We cannot just have police command in states that are not funded. It does not make sense.

“I call on the Federal Government and the police service commission to ensure recruitment of more policemen and to fund the foundations sufficiently,”he said.

According to him, we must involve more stakeholders if we want to develop new policies and come out with water tight strategies capable of arresting crime before it comes.

Akeredolu, who reiterated his commitment to the peaceful conduct of the forthcoming governorship election, said the state would not tolerate any form of thuggery or criminality during the poll.

Also speaking,  Mr Ade Adeleye, State Commander of Amotekun, who explained that it had procured 20 operational vehicles and other gadgets said that the agency had resolved on zero tolerance of crime through robust intelligence sharing with other security agencies.

“As we go alone in the efforts to reduce the spate of criminality in our environs, we will do all that is possible in line with the objectives of the Agency.

“We will continue to sensitize our people and enlist the cooperation of all stakeholders in this onerous assignment.

In another development, Police in Badagry, Lagos, on Tuesday said they had arrested three robbery suspects who allegedly robbed three fishermen of N1.6 million and other valuables at Gberefu beach in Badagry.

A police source in Badagry highlighted that two of the suspects were arrested on July 27 at a hideout in Shibiri area of Ajangbadi, Lagos, while the other was arrested on Aug. 11 at Seme, Badagry.

The source said that one of the victims, who was shot for removing the mask of one the five masked robbers, was hospitalized at Badagry General Hospital.

He said the two suspects earlier arrested had been transferred to State Criminal Investigation Department, Panti, Lagos, for further investigation.

FSP Bala Elkana, Spokesman of Lagos Police Command, did not respond to several calls and text messages for confirmation.