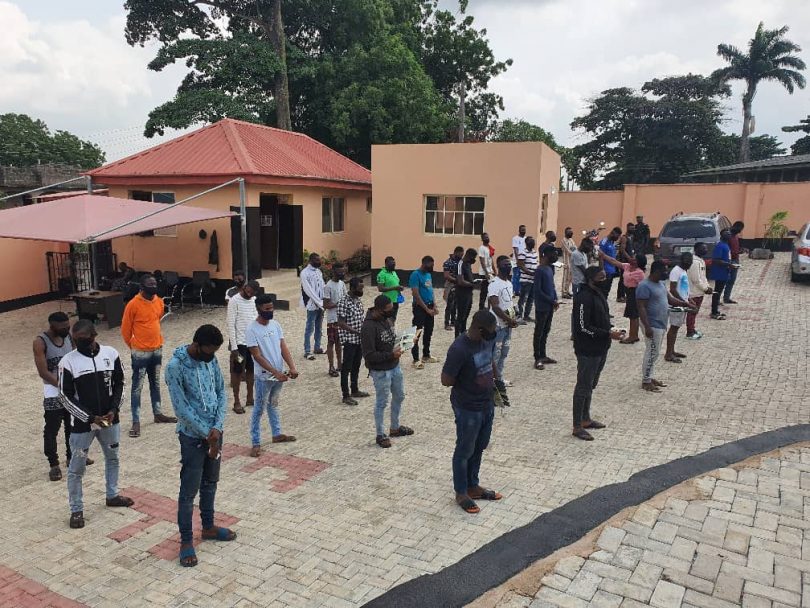 The arrest was contained in a statement signed by its Head, Media and Publicity, Dele Oyewale, and made available to newsmen in Ibadan on Tuesday.

According to the statement, the suspects included three corps members, 19 undergraduates and 10 others.

Oyewale stated that the suspects were apprehended during a raid on their hideout in Ogbomoso area of Oyo State.

He stated that officers of the commission swooped on the hideout “after diligent analysis of a series of intelligence gathered on their criminal activities.

“Three of the suspects claimed to be members of the National Youth Service Corps, while 19 said they were undergraduates in various universities across the country.

He stated that 12 exotic cars, several phones, laptops and some incriminating documents were recovered at the point of arrest.

In another development, the Lagos State House of Assembly on Tuesday said it would include punishment for parents of cultists found guilty of cultism in the amendment of Anti-Cultism Law submitted by the state government.

The House made the submission during plenary in Lagos after the Bill had scaled through the second reading through voice votes.

The report that the new title of the Bill submitted by the state government is: “Unlawful Societies and Cultism (Prohibition) Bill, 2020”.

The Speaker of the House, Mudashiru Obasa, said the punishment was to further prohibit unlawful societies and cultism in the state, and for other connected purposes.

“Parents of cultists found guilty of cultism in the state might be liable for punishment if the Bill for a law to provide for the prohibition of unlawful societies and cultism in Lagos and for connected purposes is passed.

“Though, we will also differentiate between the types of cultism in the country so that we won’t solve one problem and create another.

“We need to look at the way and manner weapons are used. The existing law should be seriously looked into,” Obasa said.

Contributing, Majority Leader of the House, Mr Sanai Agunbiade (Ikorodu I), said that sponsors of cultism could not be captured under the Bill.

Agunbiade said that some of the cult groups had their sponsors.

He said there must be a proof before suspending any student found guilty of cultism, adding that suspending a student without proven guilty was already a punishment.

“While parents of students who engage in any cult group should also be liable,” he submitted.

Also contributing, Mr Gbolahan Yishawu, (Eti-Osa II), said the Bill was presented as if it was a new one, saying that it should be an amendment Bill.

Yishawu said the scope of the Bill should be expanded, adding that it fall short of its own intendment.

According to him, Cultism is what we need to guide against with the information we are hearing on terrorism.

In his views, Rotimi Olowo, (Somolu I), explained that cultism was being practiced not only in the schools’ environment.

Olowo noted that the Bill should not be limited to schools as it supposed to extend into society.

He cited example of Aye Fraternity eight-day celebration held in his constituency, which led to the destruction of property.

Olowo alleged that some police officers were even in the cult groups, saying the Bill would nip various cult activities in the state in the bud.

Also, Mr Kehinde Joseph, argued that the Bill was not comprehensive enough.

“If you see what is going on, especially when this COVID-19 pandemic started, female beggars, who sat along the road were impregnated and they gave birth to children.

“Who are the people that impregnated them?

“Some of the guys did so. I will also support the proposition that parents of those found guilty of cultism must be also punished,” he said.

Mr Yinka Ogundimu (Agege I), said that cultism was very rampant in primary and secondary schools.

Ogundimu said the Bill should consider punishment for those found guilty, while rehabilitation of the minors found belonging to the group should be looked into.

He, however, said students in tertiary institutions, found guilty of cult activities must be prosecuted to serve as a deterrent to others.

In his remarks, Mr Desmond Elliot, representing Surulere I, said the Bill was not robust enough to cater for the larger society in the state.

According to him, the Bill looks childish to me. The Bill is supposed to take care of orientation for the minors found culpable.

Other lawmakers took turns to comment on the Bill.

Obasa, therefore, committed the Bill to the House Committee on Judiciary, and was directed to report back to the House in three weeks.