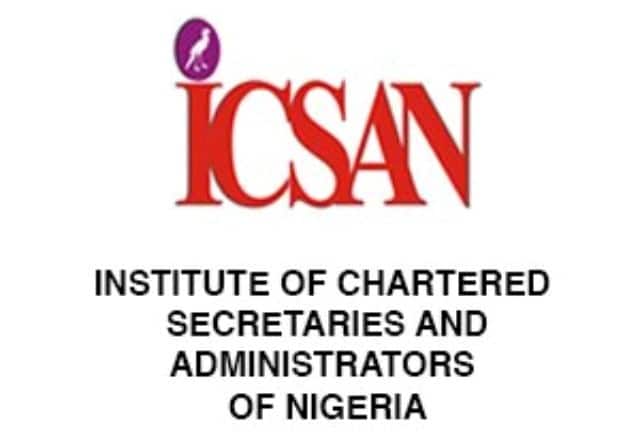 The Institute of Chartered Secretaries and Administrators of Nigeria (ICSAN), says the new Company and Allied Matters Act (CAMA) 2020 will create a more conducive environment for private sector businesses to thrive.

Its President, Mr Bode Ayeku, made the assertion at a news conference on Wednesday in Lagos.

The CAMA was signed by President Muhammadu Buhari on Aug. 7, 2020.

Ayeku, lauding some of the provisions of the new Act, said that it engendered transparency.

According to him, it reflected reality in its provision for a single shareholder company, which allows an individual to form or incorporate a company.

He added that the new legislation had taken care of an aspect relevant to the realities of the pandemic.

The president also lauded the introduction of a framework that allows the rescuing of a company in distress to protect it from going insolvent.

He, however, pushed for the Act to also enable Public Limited Companies (Plc) to hold its Annual General Meeting (AGM) virtually.

“The law is coming at the right time amidst the COVID-19 pandemic.

“As an institute, it is our responsibility to reach out to stakeholders for them to know the new provisions, new obligations, new requirements and changes so that they would all be on the same page.

“The beauty of this new law is that it ensures ease of doing business by providing very conducive environment for private sector in particular to thrive.

“By and large, we celebrate the new Act, but that does not mean that there are no controversial provisions.

“If we are having webinars of over five hundred participants, then, there is no reason why we can not hold AGMs in the same way,” Ayeku said.

The ICSAN president also clarified the misinterpretation in circulation that it was optional for a private company to appoint a Secretary, describing it as false.

According to him, Section 330 of CAMA states that except for a small company, every company shall appoint a Secretary.

“Also, the directors must jointly own at least 51 per cent of the shares,” he said.

Ayeku, on some controversial provisions of the Act, such as reduction in the number of audit committee from six to five, said that this might pose a challenge as many companies had already held their AGMs and appointed six members.

On the Act, which requires companies to publish unclaimed dividends in two national newspapers, he said the provision should be revisited to protect data privacy and eliminate the sinister efforts of fraudsters.

“The Corporate Affairs Commission (CAC) and the government would need to review this particular area, as we must be mindful of allowing fraudsters to capitalise on the system,” he said.

Ayeku called for review of the provision that states, “power is given to the Minister to remove a member of the board, if he thinks his opinion was not in the interest of the commission.”

According to him, transparency and fairness require that to remove a board member, the Act should have specified the grounds for removal.

“The Act should have also be given an opportunity for such a person to respond to whatever indicators that the minister was using for his removal.

“That would have provided a balanced provision to protect the interest of corporate Nigeria.

“The ideal thing is to ensure that the ground upon which such opinions are formed, is objective.

“Another controversial area is that a commission like the CAC is without a legislation provision of a statutory Secretary.

“If you look at other agencies involved in corporate Nigeria, they have a statutory provision for a Secretary.

“This should be properly worded as in the case of the private sector with regards to qualifications, experience, reporting lines, and mode of removal,” he said.

Ayeku also called for the review of the absence of an omnibus clause for the minister in the new Act to make some regulations when necessary.

“I think it is very important as there is no law that can envisage all possibilities, and it is important for a minister to have that power for a fall back position in the case of a new development,” he said.

The ICSAN president also advised members of the institute on client engagement, compliance and guidance on the changes and benefits, for smooth incorporation in line with the provision of the law.

He appealed for flexibility on the part of regulatory agencies as companies make effort to comply with modifications in the new law in any already established ongoing process.

Ayeku also called for regular review of the Act as with advanced countries.

“We do not need to wait until we repeal the law. What we should do is to amend the law,” he said.