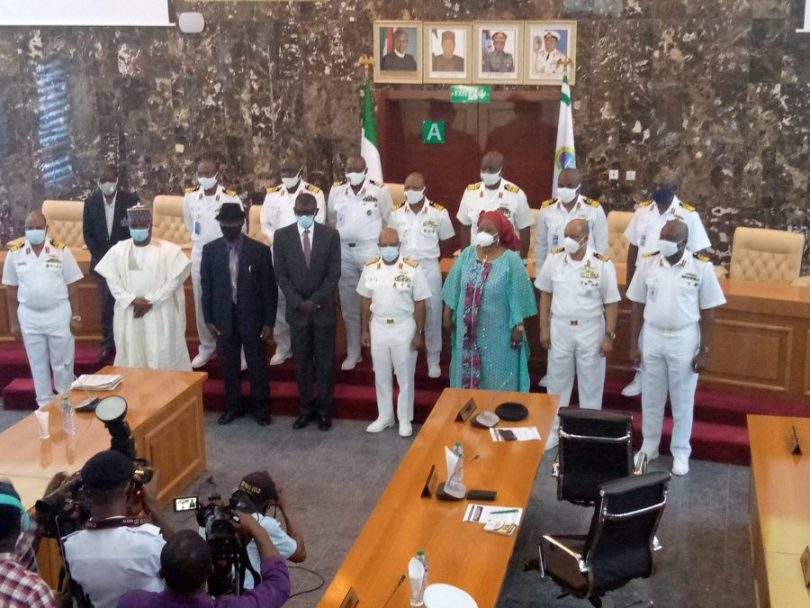 The Nigerian Navy on Thursday signed a Memorandum of Understanding (MoU) with the Nigerian Export-Import Bank (NEXIM), to open up the nation’s inland waterways to boost the maritime movement of goods and service.

Speaking during the ceremony on Thursday at the Naval Headquarters  Abuja, the Chief of Naval Staff (CNS), Vice Admiral Ibok -Ete Ibas, said the signing of the MoU would remain indelible in his memory.

Ibas said, “Since it is the constitutional responsibility of the Nigerian Navy to coordinate all national hydrographic surveys, it is only natural for the Service to be part of this strategic partnership.

”Indeed, today’s epoch signing ceremony will remain indelible in my memory as it marks a new phase in the attainment of Nigerian Navy’s statutory responsibilities regarding the charting and survey of the nation’s maritime areas.”

”Following the Nigerian Navy’s attainment of hydrographic survey and charting capacity with the unveiling of the first and second indigenous navigational charts, we are here today to move to the next phase toward opening up the nation’s inland waterways

Ibas said that the partnership necessitated the drafting of an MoU to guide the engagement between the Service and NEXIM Bank toward actualising the overall objectives of the Regional Sealink Project which the bank was driving.

”As you know, the Sealink Project was initiated to remove the huge logistics challenges and non-tariff measures along the Economic Community of West African states trade corridor.

”I am glad that after series of meetings and interactions, the Nigerian navy and NEXIM Bank have been able to produce an MoU to formalise their partnership.

”I wish to reassure our partners of Nigerian navy’s capacity to support the project to its fruition in order to enhance economic trade and movement of goods and Services both within Nigeria and across the West Africa region for a more wholesome economic and national development,” he said.

Ibas expressed gratitude to all persons who had contributed in making the MoU a reality.

He assured that NEXIM would efficiently and quickly adhere to all the conditions of the partnership.

”Today is a very auspicious day for us because it will contribute significantly to trade in Nigeria and economic development of the country,” he said.