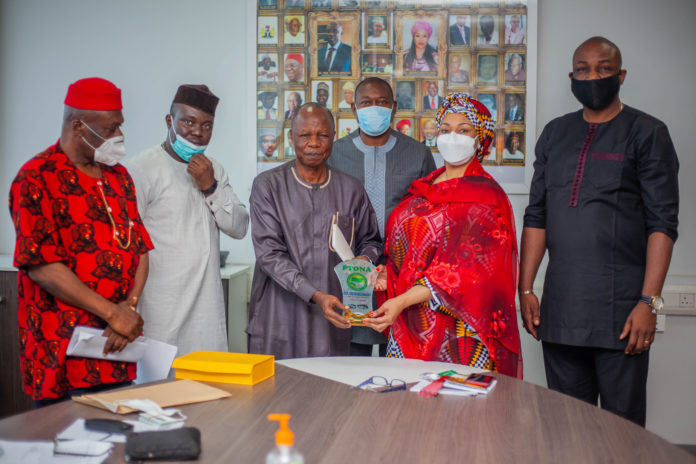 The Federal Government of Nigeria has approved a ₦10 billion survival fund for transport workers and operators.

The Minister of State for Transportation, Ms. Gbemisola Saraki disclosed this when the President, Public Transport Owners of Nigeria Association (PTONA), Engr. Isaac Uhunwagho, led the Association’s National Executive Committee and Trustees to pay her a courtesy call in Abuja recently.

While appreciating the fact that 90% of Nigerians travel by road, Sen. Saraki stated that the FG will soon initiate a master plan that will reform the sector. She, therefore, solicited the buy-in of all stakeholders.

Reacting to challenges operators face from State governments and other stakeholders, the Minister gave the assurance that she will discuss the issues through the National Transport Commissioners Forum.

Also, the Minister disclosed that she is in talks with the Federal Ministry of Works and Housing on the concessions of some routes which she thinks is the best way to go so as to increase government revenue.

She further, enjoined them to avoid duplicity and formalize their structures in an organized manner for better engagements, with the ministry and other relevant agencies.

The National President, Public Transport Owners of Nigeria Association (PTONA), Engr. Isaac Uhunwagho who led the delegation on the visit to the Honourable Minister of State for Transportation, Sen. Gbemisola Saraki, stated that their visit is in respect challenges being faced by the body and also to appreciate her efforts towards the challenges PTONA has being facing since February 2020 and the cooperation and protection which the Ministry is now ready to provide for public transportation in Nigeria. The President said that with this, “our future in the ‘one chance’ business is now encouraging.

Also read:  Why North is backward in education – Report

Also, Engr. Isaac pleaded for COVID-19 financial palliatives for her members to prevent their businesses from folding up. The President, PTONA clarifying on the need for this disclosed that PTONA members felt the impact of the lockdown the most as their branded buses could not operate due to the ban on interstate travel. The general motor parks he said did not comply with the ban as their parks became a safe haven for flouting the ban and as a result enjoyed black market transportation boom.

He further lamented that despite PTONA members being the major investors in the transportation sector, it is ironical that their companies are the prime target for state and local government authorities who impose taxes, levies and other ridiculous conditions on their members while according to him, they leave the filthy general motor parks and target us. These challenges among others necessitated the visit on the Honourable Minister and hoped their pleas would be looked into.