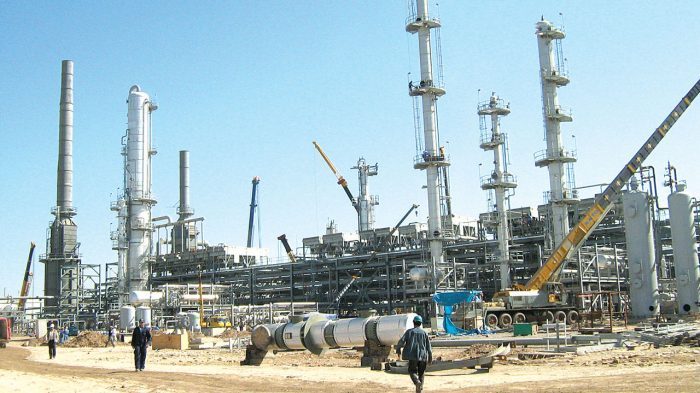 The management of the multi-million naira Edo Modular Refinery and Petrochemicals Limited says the project is 99 per cent completed and will commence operation end of September.

Segun Okeni, Head Quality, Health and Safety/ Community Relations of the company, disclosed this on Tuesday during an inspection tour to the site at Ologbo, Ikpoba-okha Local Government Area of the state, by members of the Edo House of Assembly.

Okeni said that the Edo Refinery has capacity to refine 60,000 barrels per day (bpd) of crude oil in future.

He explained that the refinery would target production of four products which included, 55 per cent of diesel, 38 per cent of fuel oil, 10 per cent of Naptha and the rest would be gas to power the plant.

Okeni said the crude oil would be sourced from the facility of the Nigeria Petroleum Development Company (NPDC) few kilometres away from the refinery.

“In the long run, we will need another set of equipment for us to produce Premium Motor Spirit (PMS).

“The Naptha is equivalent to petrol. It’s just to upgrade it to petrol. From the Naptha that we will be exporting, a lot of foreign exchange will be attracted to the state.

“About 55 licences were granted to different investors to build modular refineries in the last couple of years in Nigeria.

“As of today, only five refineries are on-site and some have completed the project.

“But it will interest you to know that Edo refinery is the fastest. We got license in 2018 and we started foundation in October 2019. In less than a year we are ready to begin operation.

“We have directly employed more than 300 people, majority are from the host communities in Edo,” he said.

Earlier, Speaker of Edo House of Assembly, Francis Okiye, commended the state government for the investment, adding that it would benefit Edo people.

Okiye said: “We are here as part of our oversight functions to ensure that the money appropriated is judiciously used.

“As part of stimulus to encourage investment, the governor committed N700 million to the company. There is already employment and there will be chains of benefits that will be coming from here.

“As legislators, we are satisfied with what we have seen here today. The investment here is apt and will be beneficial to the state.”

In another development, a pressure group, Concerned Elite Citizens of United Ogbe, on Tuesday lauded Gov. Godwin Obaseki’s infrastructure development in Edo, promising its unalloyed support for his re-election bid.

The Spokesman of the group, Peter Obobaifo, told newsmen in Benin that Ogbe indigenes of Benin were proud of the governor’s monumental achievements in Ogbe and its environs.

Also read:  Edo 2020: I will defeat Oshiomhole even in his ward, says Shaibu

“The network of tarred roads in Ogbe, Samuel Ogbemudia Stadium which has been renovated to international and Olympic standard, and Odigie-Oyegun Staff Training Centre, among others are visible projects executed to our satisfaction.

“It is, therefore, unfair when some persons out of sheer mischief claim that the governor has not done anything or that nothing is on the ground.

“Renovation of schools and training of different categories of teachers, including the Edo Best initiative, have all attracted commendation and investors to Edo,” he said.

Obobaifo emphasised that the group was particularly pleased with the governor for getting rid of touts and the nefarious activities of the Community Development Association(CDA).

According to him, if the forthcoming governorship election is genuinely a fight for the welfare of the people, the will of the people should be allowed to prevail through a free, fair, credible and peaceful election.