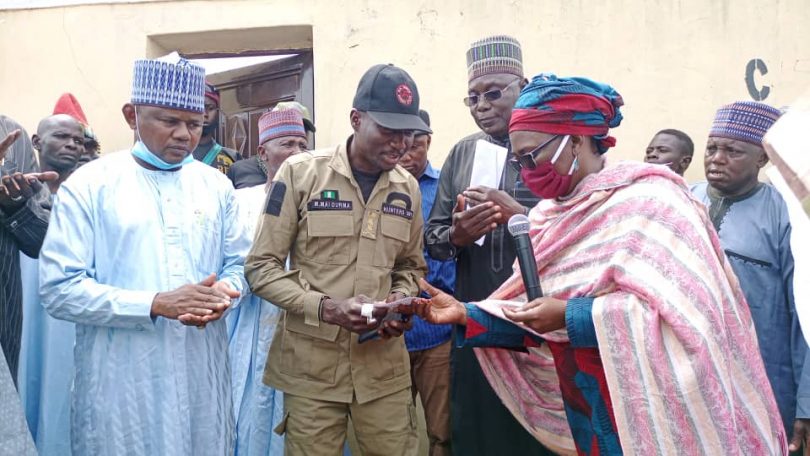 Borno State Government says it has resettled 5,200 displaced persons, comprising of 750 households, at Kawuri Community in Konduga Local Government Area of the state.

Gov. Babagana Zulum of Borno, disclosed this during the return of the previously displaced persons at the outskirt of Maiduguri.

Zulum said that the exercise was part of the continued efforts of the state government to resettle all displaced persons in the state to enable them return to normal life.

The displaced families fled their homes and took refuge in Dalori Internally Displaced Persons (IDPs) camp after insurgents’ sacked the community in 2014.

The insurgents killed some of the residents and set the entire community ablaze.

Represented by his Deputy, Umar Kadafur, Zulum said that the agrarian community would return to their farmlands and engage in meaningful livelihood activities.

Zulum said: “The state government will collaborate with the humanitarian community to support you with empowerment so that you can become self-reliant.

“We will make sure that we do not only provide you with livelihood support, but also ensure that we collaborate with the security agencies to guarantee your safety,” he said.

The governor urged the youths to be patient and to stay together to develop their community.

“As you are returning home, I want to urge the youths to desist from any form of social vices or nefarious activities.

“You must be law-abiding and do meaningful things that will add value to your lives,” Zulum said.

Also speaking, Mustapha Gubio, the Commissioner of Reconstruction, Rehabilitation and Resettlement (RRR), said the resettlement process was implemented in accordance with the humanitarian principles of willingness, safety and dignity.

Gubio noted that each of the displaced houses would be supported with N50,000 resettlement package to enable them to engage in meaningful activities.

The commissioner added that the ministry also distributed assorted food and relief items to each of the resettled families such as rice, cooking oil, mosquito nets, blankets, textile materials and mattresses.

In his remarks, Lawan Awwal, the District Head of Kawuri, thanked Gov. Zulum for rebuilding the destroyed community.

“We lost everything that we once prided ourselves as owning, but we thank God for sparing our lives to see this day.

“We want to thank you for building our homes, hospitals and providing us with livelihood support,” Awwa said.

In another development, the All Progressives Congress (APC) on Thursday, sympathised with victims of the recent flood disaster in Zamfara.

This was contained in a statement signed by the APC  Chairman in the state, Alhaji Lawal Liman and made available to newsmen in Gusau .

It would be recalled that hundreds of households were displaced, and multi-million naira worth of farmland, produce and property destroyed across the state as a result of flooding.

“On behalf of the entire APC members in the state, we are extending our sympathy to victims of flood disaster across the state,”  he said.

Liman urged the victims to consider the incident as a test from Almighty Allah.

He appealed to people of the state to embark on prayers to Allah to avert a reoccurrence of such disaster.