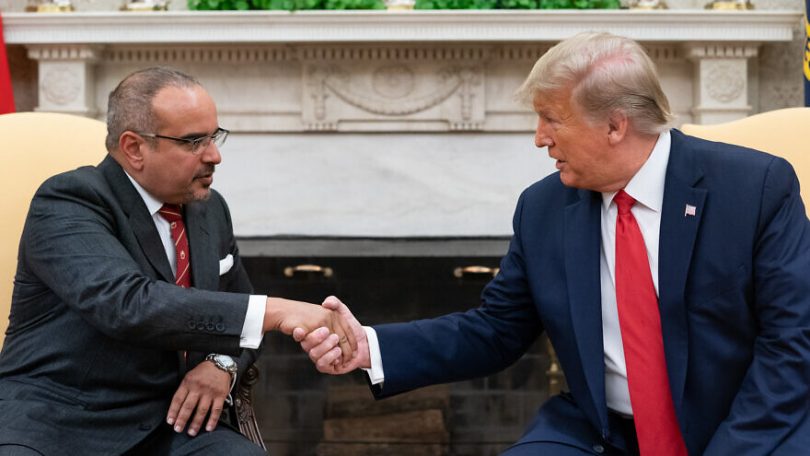 Bahrain has become the latest country to normalize ties with Israel, announced U.S. President Donald Trump via Twitter on Friday.

The two countries will “continue in their efforts in this regard to achieve a just, comprehensive and enduring solution to the Israeli-Palestinian conflict and to enable the Palestinian people to realize their full potential.”

The announcement by Trump comes just weeks after Israel and the United Arab Emirates agreed to normalize ties. Both countries are expected to formalize the deal at a signing ceremony at the White House on Sept. 15.

The statement said that Bahrain has accepted Trump’s invitation to join Israel and the UAE at the ceremony. Bahrain’s foreign minister is planning to attend. Bahrain will become the fourth Arab country to establish diplomatic relations with Israel, including Egypt in 1979 and Jordan in 1994.

At least since 2019, Bahrain has been improving its diplomatic relations with Israel. In June of that year, it hosted the “Peace to Prosperity” conference, where the United States released the economic component of its Israeli-Palestinian peace proposal. The following August, Bahrain joined the U.S.-led coalition against to protect shipping in the Gulf against Iran.

Along with Saudi Arabia, Bahrain opened its airspace last week to allow flights between Israel and the UAE.

This week, Saudi Arabia and Bahrain agreed to open their airspace to flights east from Israel.

Like the UAE, Bahrain is a rapidly developing Arab monarchy in the Persian Gulf region. The island nation has had longstanding close with the United States, especially in areas such as defense.

While the ruling Al Khalifa family are Sunni Muslims, most in the nation are Shi’ites, making it one of only three Middle Eastern countries where Shi’ite Muslims are the majority, the other two being Iraq and Iran.