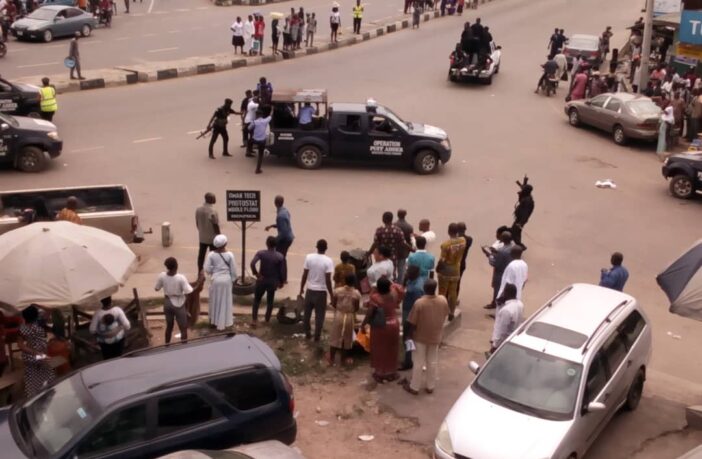 A group of youths in Osogbo on Tuesday evening staged a protest over the killing of one of them by operatives of the military Joint Task Force (JTF) in Osun State.

Gov. Gboyega Oyetola on April 28 inaugurated the JTF, to tackle the menace of illegal mining, kidnapping and cult activities in the state. The youths were genuinely disturbed that a body constituted against illegal mining has now added additional task of pursuing innocent youths in the town, in the name of crime prevention. The youths described the JTF as the real Yahoo-yahoo.

The youths, armed with sticks and other dangerous weapons, attacked passers-by during the protest, even as the protesters later dumped a corpse believed to be that of the deceased in front of Osun Government House, Oke Fia, Osogbo and destroyed a motorcycle in the process.

A vehicle belonging to the JTF was also damaged around Alekuwodo Area by the protesters, while many traffic wardens met on duty were beaten up.

It was gathered that a vehicle belonging to the JTF had chased a Toyota Corolla car with four occupants, believed to be internet fraudsters, along East bypass, Osogbo, resulting in an accident.

A witness highlighted on condition of anonymity that while trying to escape from the JTF vehicle, the driver of the car, with registration number KUJ 553LY, veered off the road and hit an electric pole.

The witness said one of the four occupants of the vehicle died instantly, while the other three sustained injuries and were rushed to a nearby hospital.

When contacted, Osun Police Command Public Relations Officer, DSP Yemisi Opalola, confirmed the incident but added that the incident involved men of JTF and not the police command.

JTF was a collaboration of the Army, Police, Air Force, Department of State Service, Nigerian Security and Civil Defence Corps and the Immigration Service.