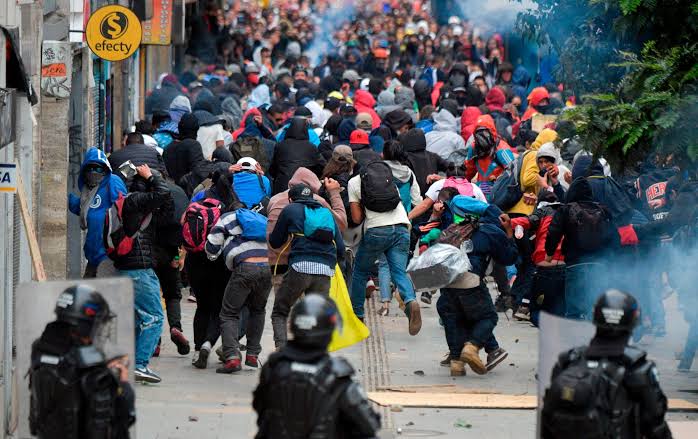 Seven people were killed and four others injured in an attack in south-western Colombia on Sunday, local media reported.

The attack happened in Munchique, in the south-western state of Cauca.

“You have no alternatives in Cauca,” Ortega said, adding that those who live there are “exposed to criminals of all types.”

Army spokesman Marco Vinicio Mayorga told the broadcaster that the crime was “preliminarily attributed” to the Jaime Martinez column, which emerged from the 2016 demobilisation of the guerrilla movement FARC and operates in the area.

The country’s ombudsman for human rights condemned the Cauca events on Twitter, saying: “We urgently need to eradicate the … violence which affects rights and constantly endanger the lives of Colombians.”

More than 240 people have died in 60 massacres – defined as killings of at least three people – in the country so far this year, according to the NGO Indepaz, which monitors the violence.

According to the NGO, the Munchique attack was the eleventh this month alone.

In another development, an Australian man and his British colleague were killed on Sunday night in a bomb blast in the Solomon Islands, local police said.

The men were working for the Norwegian People’s Aid (NPG), an NGO that was conducting a survey on the contamination of Unexploded Ordnances (UXOs), which date back to World War II.

“We are devastated by what has happened, and for the loss of two good colleagues,” NPA’s secretary-general Henriette Killi Westhrin said in a statement.

The Royal Solomon Islands Police Force (RSIPF) are investigating the incident and urged residents in West Honiara to stay away from the area.

“We call on members of the public in the Tasahe area of West Honiara to please stay well away from the area of the incident and allow RSIPF officers to do their work as we investigate this tragic incident,” police spokesperson Clifford Tunuki said.

The NPA said it had been working on a project with the government to locate unexploded bombs.

Its activities in Solomon Islands have temporarily been put on hold.

Tunuki confirmed no RSIPF officers were present at the time of the blast, “despite the fact that we work together on the Project.”

“On behalf of the RSIPF, I wish to convey my sincere condolences to families and relatives of those two foreign nationals, who died in this tragic incident,” he added.