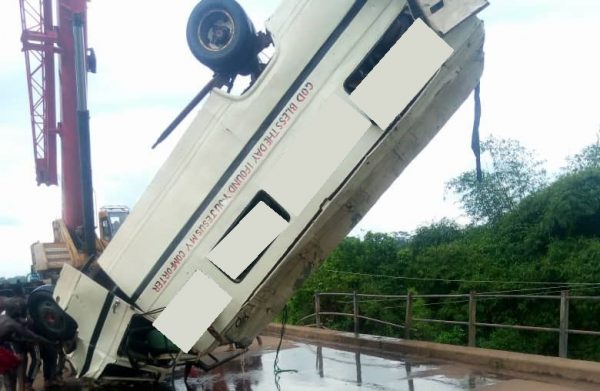 …As divers seek more bodies, retrieving 1, out of 14 passengers in Sokoto mishap***

The Federal Road Safety Corps (FRSC) in Ebonyi has confirmed the recovery of three more corpses from the Akeze-Ukwu River after a Mercedes 608-model bus plunged into the river on Sept.18.

The bus conveying members of a Church who attended their pastor’s burial was returning to Enugu when the accident occurred. The accident occurred, even as divers searched for victims, recovering only one corpse on Saturday morning, out of 14 passengers of a vehicle that plunged, Thursday into River Rima Bridge, along Tashar Illela on Sokoto-Kware-Illela road in Sokoto state, due to flooding.

The bus driver was said to have lost control of the vehicle while trying to overtake an articulated vehicle on the bridge.

Mrs Stella Uchegbu, the FRSC Sector Commander in Ebonyi, stated on Sunday evening that the retrieved corpses were deposited at the Mater Misericordae hospital Afikpo.

Uchegbu said that the corps sent its personnel to the hospital, where some rescued victims were being treated, to interact with doctors on the true reports concerning the ‘unfortunate’ incident.

“We have been getting conflicting reports on the casualties so we sent our personnel to the hospital to interact with the doctors handling the cases.

“We were able to ascertain that seven persons were actually rescued from the river on the day of the incident instead of five earlier reported.

“One person was confirmed dead, two persons are presently on admission, two have been officially discharged while two opted to return home having sustained no injuries from the incident,” she said.

According to her, the total number of dead victims is now 18.

Also, the Ebonyi Command of the Nigerian Police Force confirmed in a statement the retrieval of three more corpses on Sunday, adding that a retired police officer was among the deceased persons.

The statement signed by DSP Loveth Odah, the Police Public Relations Officer, said that “the lifeless body of retired CSP Livinus Mbah was among the retrieved corpses.

“Efforts are still on to recover the remaining 10 persons,” it stated.

In the meantime, divers have continued the search, for more bodies, retrieving only one corpse Saturday morning, out of 14 passengers of a vehicle that plunged on Thursday, off River Rima Bridge, along Tashar Illela on Sokoto-Kware-Illela road in Sokoto state, due to flooding.

The commercial vehicle,  carrying 14 passengers, plunged into the river as water submerged the road including the bridge.

A Rescue Officer from National Emergency Management Agency (NEMA) Mr Aminu Ambursa, told newsmen that as at Saturday morning,  only one dead body was recovered and taken to Specialist Hospital Sokoto.

He said other officials were from Sokoto State Emergency Management Agency (SEMA) and Transport unions.

He explained that the rescue became tough due to high volume of water that flooded the whole area.

According to him, officials have to seek assistance from construction firms for heavy-duty crane, local divers and canoe divers for the mission.

Ambursa said the passenger vehicle involved in the accident was spotted, but however, could not be removed because it was hooked to a deep hole and passing water was still much.

Another rescue official from the federal fire service, Muhammad Jibril, said efforts were still in progress to remove the vehicle along with human bodies.

A local diver, Muhammadu Sada, said they deployed different tactics to save the passengers’ lives, stressing that the high water level contributed to the mission’s difficulties.

Sada explained that the area had not recorded such flooding in a long while and cautioned road users to beware of crossing the bridge because of the magnitude of the flood.

“We raised N8,000 from the contributions and a philanthropist, Alh. Ahmadu Maidoya, and others contributed about N80,000 for canoe and local divers,” he said.

When contacted, the Public Relations Officer of Sokoto State Ministry of Environment, Malam Abubakar Gani, said the Commissioner, Alh.  Sagir Bafarawa, was not in town.

Gani said the ministry and State Emergency Management Agency (SEMA) were aware of the situation, however, could not speak on their contribution to save peoples’ lives,  being the responsibility of the ministry.

The PRO assured to update the media on the situation,  noting that the ministry had earlier alerted residents on the possibility of the flood and advised people to use alternative routes.

Bada, from Usmanu Danfodio University Sokoto,  said the situations could attract public demonstrations as obtained in other countries where they value human lives.