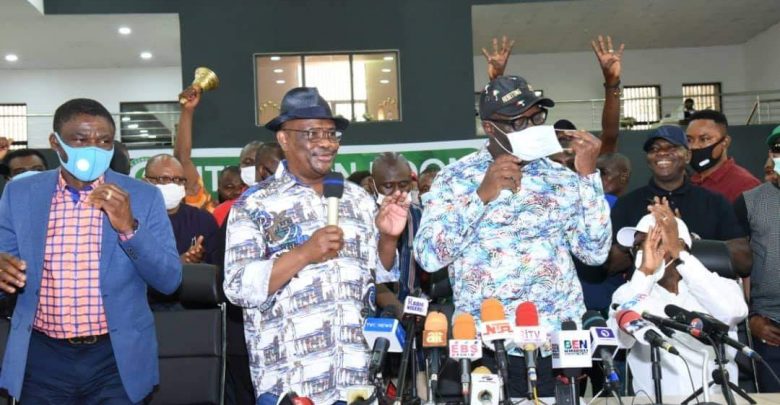 …As Gov. Diri says Obaseki’s reelection is triumph of democracy***

Gov. Nyesom Wike of Rivers has commended the Independent National Electoral Commission (INEC), and the Nigeria Police Force on their conduct during the Edo Governorship Election.

Wike, who is the Chairman of the Peoples Democratic Party (PDP) National Campaign Council, made the commendation while addressing a large crowd of party supporters at the Port Harcourt International Airport, Omagwa on Sunday.

He stated that the conduct of INEC and the Police showed that they were ready to correct the mistakes of the past.

The Governor also commended the people of Edo “for ending godfatherism with the re-election of Governor Godwin Obaseki’’.

“With the re-election of Governor Obaseki, the entire South-South Region is now completely PDP.

“What this means is that the entire South-South can now speak with one voice on issues concerning us,’’ he said.

Wike thanked the people of Rivers for their prayers, which led to Obaseki’s victory in Edo.

Similarly, at a brief reception by PDP leaders at Government House, Port Harcourt, Wike said that with the Edo victory “there is hope’’ for the country’s democracy.

According to him, the neutrality of the electoral body and security agencies will make one to say the election was free and fair.

He thanked the Party Leaders for their solidarity throughout the election period and urged them to maintain the spirit.

In his remarks, the Chairman of the Elders Advisory Council of the PDP, Chief Ferdinand Alabraba, commended Gov. Wike for leading a successful campaign.

Alabraba said the victory in Edo had proved that Wike “is always committed to any assignment given to him’’.

Similarly, the All Atiku Support Groups (ASGs), has congratulated Gov. Godwin Obaseki on his re-election as the governor of Edo on the platform of the Peoples Democratic Party (PDP).

The group Chairman, Mr Fabiyi Oladimeji, in a statement issued on Sunday in Abuja said Obaseki’s convincing victory was due to the resilience and steadfastness of the people of Edo State who did not give room for any manipulation by undemocratic forces.

“Nothing can be more dignifying than the stance and resolve of the good people of Edo for what they truly believed in.

“The good people of Edo state have demonstrated dexterity and spoken very loudly against godfatherism, against arrogance in power just as they have voted for progress and prosperity.”

Oladimeji commended the courage of Obaseki, his deputy, the State campaign council under the leadership of Chief Dan Orbih and all leaders of note in Edo State, Oladimeji said.

He also commended the Independent National Electoral Commission (INEC), for maintaining neutrality in the election.

“We understand there cannot be perfection in any electoral process, but INEC by its conduct in the just concluded Edo election has shown that it is possible if we all decided to do what is right.”

Oladimeji said that the group would not take the role played by the security agencies in ensuring the smooth running of the elections for granted.

He said that although there was a full contingent of officers of the Nigerian Police and other security agencies on ground, no recorded cases of intimidation or harassment of voters were recorded during the election.

He also appreciated President Muhammadu Buhari for allowing the good people of Edo to have their say and way.

“Democratic process demands that people should be allowed to freely elect their choices, as democracy is all about the people.”

He also commended Atiku Abubakar for his timely intervention and support, as well as the Edo State Chapter of  ASGs for mobilising voters for Obaseki’s re-election.

In the meantime, Gov. Douye Diri of Bayelsa has congratulated his Edo counterpart, Mr Godwin Obaseki, on his re-election, describing the victory as triumph of democracy in the state.

Diri said Obaseki’s resounding victory as declared by the Independent National Electoral Commission (INEC), was a triumph for democracy and, indeed, the people of Edo .

The governor, in a statement issued to newsmen on Sunday by his Acting Chief Press Secretary, Mr Daniel Alabrah, observed that people’s power, as expressed in  Saturday’s governorship election in Edo remained the most potent force in any democracy.

He, therefore, commended the electoral umpire for upholding the will of the Edo people in spite of reported pressure to unduly influence the outcome of the poll.

The governor, noted that Obaseki’s re-election would give greater impetus to development of the state as he remained  the most popular choice of the people.

“This victory belongs to Edo people, who have proved they can make their votes count. People’s power in any democracy is the most potent force.

“I, therefore, congratulate my brother and colleague, Obaseki, on his resounding victory as declared by INEC.

“His re-election has shown and proven that he is, indeed, a man of the people. So, I urge him to be magnanimous in victory.

“I also commend INEC, for upholding democracy and for allowing the will of  Edo people to prevail.

“Democracy in Nigeria will be strengthened when democratic institutions play their stipulated roles without undue interference,” he said.

The Bayelsa governor further congratulated the Peoples Democratic Party (PDP), for securing yet another heartwarming victory in Edo.

He said that he was particularly delighted that all the states in the South-South region now belonged to the PDP family.

In another development, the Yiaga Africa, a civil society organisation, on Sunday revealed that the Independent National Electoral Commission’s (INEC), election result in Edo was consistent with its Parallel Vote Tabulation (PVT) methodology.

Mr Ezenwa Nwagwu, Board member, Yiaga Africa who made this known in a statement, said that the group deployed PVT to assess the credibility of the Sept. 19, Governorship poll in Edo.

Nwagwu said that the group, through its `Watching The Vote  (WTV )citizens movement’, had deployed 500 observers to monitor the election.

He said that it was important to highlight that the counting process at polling units was transparent and included representatives from the two political parties that received the most votes.

He said that Yiaga Africa PVT result revealed that INEC’s official results for turnout and rejected ballots were also consistent with its WTV estimates.

According to him, the results are consistent.