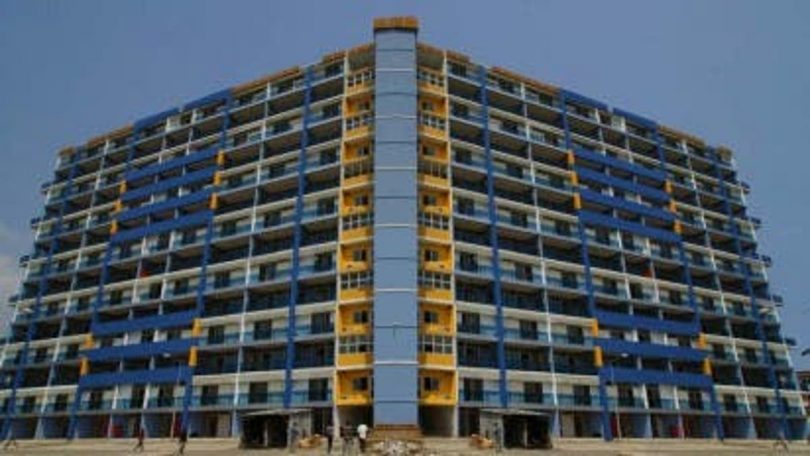 The 1004 Homeowners and Residents Association (1004HORA), Lagos, on Friday appealed to President Mohammadu Buhari to deliver them from the hands of criminals terrorising the estate and allegedly abetted by the police.

The estate’s Acting Chairperson, Mrs Lola Ademola, told a news conference that the call had become expedient as their efforts to stem criminality in the 41-year-old estate were frustrated and had not yielded the desired result.

According to her, the DPO in charge of the Divisional Police Officer of Bar Beach Police Station, CSP Isa Lawal, allegedly abets the perpetrators of crime who have now turned the estate into a safe haven for criminals, especially electricity thieves and other lawbreakers.

Chairman, Processes, Governance and Control Committee, 1004 HORA, Mr. EfiyeBribena, Acting Chairman, 1004 Homeowners and Residents Association(1004 HORA), Mrs Lara Ademola, Representative Cluster A, Mr BayoAdemiluyi and Chairman, Estate Refurbishment Committee, Mr John Ochuko at the News Briefing by the 1004 Homeowners and Residents Association (1004 HORA) appealing to the Federal Government and Law Abiding Citizens to deliver them from the DPO of Bar Beach Police Station who allegedly has the estate into a safe haven for power thieves and violent criminals in 1004 Estate in Lagos on Friday/18/09/20/OOA/NAN.

She said that the residents were calling on all well-meaning Nigerians to intervene and come to their aid as the highbrow residential estate on Victoria Island, was now home to over 5,000 residents of different nationalities.

She added that it was managed by the 1004 Homeowners and Residents Association (1004HORA).

“The design of the estate makes it a necessity that there must be constant supply of electricity as water, lifts, cooking and other utilities are dependent on power.

“In recent times, 1004HORA’s ability to provide 24hrs electricity in the estate has been threatened by the activities of residents engaged in power theft, which is not just a breach of the estate’s bye-laws but also a criminal act under the laws of Nigeria.

“To stem this tide of power theft and avoid infrastructure collapse, 1004HORA deployed agreed community sanctions against the thieves.

These measures have brought the association on collision with those engaged in electricity theft,’’ she said.

According to her, the chief among them, allegedly is one Mathew Ibadin, a tenant who has been using his position as the Chairman of the Victoria Island Police Community Relations Committee (PCRC) to cause mayhem in the estate.

The chairperson claimed that Ibadin brazenly steals power, aids and abets others to do same and promote general lawlessness in the estate with the active support and connivance of the DPO, Bar Beach Police station.

“One would expect the Nigeria Police to support 1004HORA and apprehend thieves and criminals in the estate; however, what we observe is that the DPO is always aiding the power thieves in 1004 Estate, while punishing those trying to uphold the law.

“On numerous occasions, the DPO has ordered the arrest and detention of 1004HORA officials and staff for disconnecting apartments involved in power theft.

“For instance, when one Mrs Eno Eniang was found to be involved in power theft and disconnected, Ibadin mobilised CSP Lawal and his men to forcefully reconnect the apartment.

“Also, on May 8, 2020, the DPO ordered the arrest and detention of the HORA Operations Manager for disconnecting an apartment involved in power theft.

“This action by the DPO in aiding criminals has emboldened other persons within the estate to steal power at will without fear of repercussion, putting a strain on the estate’s power supply,’’ she added.

She said that the latest abuse of power on Aug. 6, was the arrest and detention of the 1004HORA Operations Manager at the behest of Ibadin, who in his attempt to cover up his power theft, removed his issued meter.

According to her, on Aug. 9, Ibadin against the estate byelaws, brought in a petrol generator to power his apartment thereby, exposing the block of 127 apartments on 14 floors and indeed the entire estate to the risk of fire outbreak.

Ademola said: “This is real and presents danger which must be averted if we are to safeguard lives and property.

“All efforts to get him to remove the generator from the estate was resisted by Ibadin, supported by CSP Isa Lawal who provided a team of armed policemen to guard the apartment and prevent the removal of the generator.

“This is not only a cause of pollution but a threat to lives and property in the estate. The generator is still powering Ibadin’s apartment till date, in spite of being served a notice by the Lagos State Environmental Protection Agency (LASEPA) to remove it from the estate.

“The DPO has made it impossible to enforce the directive of LASEPA. Ibadin has become law unto himself with the support of the DPO.’’

She also alleged that with the support of the DPO, Ibadin had continued to threaten and harass 1004HORA executive members and staff as well as other residents.

Ademola claimed that the duo had also been engineering the arrest and detention of the estate’s officials both at the Bar Beach Police Station and Police Zone 2 Command headquarters, Onikan over his continuous use of generator in the estate.

She said that to secure reprieve for its officials, staff and residents from constant arrest and intimidation, HORA obtained a court injunction, restraining Ibadin, the Bar Beach DPO and the Nigeria Police from further arrest and harassment.

Ademola, however, said that the duo, in flagrant disrespect of the court order, had continued to harass and threaten 1004HORA officials and staff, claiming that no court in the land could prevent him (DPO) from doing his job.

According to her, the DPO has been telling whoever cares to listen that Ibadin is his friend of over 10 years and he will do everything to protect his interest.

She said that on Sept. 15, Ibadin in company of others armed with cutlasses and other dangerous weapons caused damage to the estate’s power supply and property, and dared anyone to stop them with the threat of death or grievous bodily harm.

Ademola said that the resident who challenged him on his criminal behaviour was arrested by the DPO on Sept. 16.

“Also, on the night of 15th September 2020, one Paul Okoye, alias Paul-O, found to be involved in power theft and disconnected stormed the apartment of the 1004HORA acting chairman with thugs and dangerous weapons to physically assault her.

“This case of criminal damage and threat to lives was reported at the Police Area Command, Lion Building, Lagos but was frustrated by the DPO who convinced his boss not to attend to us,’’ she said.

The chairperson said that the estate had written several petitions on the unprofessional and illegal activities of the DPO in aiding of criminals and lawbreakers to the Commissioner of Police, Lagos State Command, the AIG Zone 2 Command and the Inspector-General of Police.

She, however, said that the estate had not received any response or respite.

According to her, the law officer on Victoria Island, who should be their first point of refuge has become their tormentor, refusing to protect law-abiding homeowners and residents.

Ademola said that the loyalties of the DPO to some criminal elements in the estate had taken away its peace.

She added: “We cannot see why DPO Isa Lawal’s blind loyalty to his PCRC friend, Ibadin, should overshadow his responsibility to maintain law and order in a just and equitable manner.

“We request the President of the Federal Republic of Nigeria to free us from this scourge and order the Police, especially the Bar Beach DPO to uphold law and order and protect law-abiding residents from brigandage and oppression.’’

“I have some correspondences to prove that.

“However, this press briefing will be discussed with the CP for further actions.

“We urge the parties to have trust in the CP for justice,’’ he said.

However, efforts to get Ibadin to comment failed as phone calls and text messages to him were not answered.