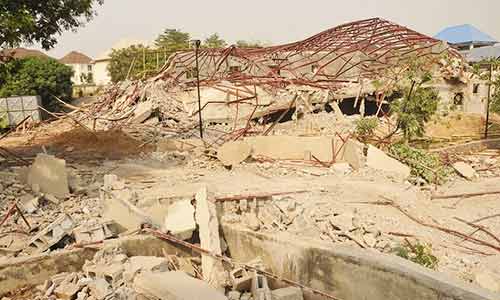 The Federal Capital Territory Administration (FCTA), on Tuesday, began the demolition of 2,400 shanties in the Rural Grazing Area (RUGA) settlements located at Kukwuaba- Wuye District along the corridor leading to the Nnamdi Azikiwe International Airport, Abuja.

Over 1,000 shacks were removed during the exercise carried out under heavy security presence by FCTA Department of Development Control.

Director of the Department, Malam Muktar Galadima, said the exercise was to checkmate security challenges posed by the threat of Boko Haram and kidnapping and bring orderliness and sanitation to the nation’s capital city.

Galadima explained that apart from security threats to Abuja, the shanties were becoming a serious environmental hazard within the railway corridors and it must not be allowed to continue.

He promised that the exercise would be sustained with weekly monitoring to ensure that occupants of the affected shanties do not reassemble.

According to him, the illegal squatters are notorious of defying the laws, and disregarding government orders.

” This is in continuation of implementation of the FCT mandate of the Next Level by ensuring that we checkmate the issue of security challenges as well as bringing orderliness and sanitation to the nation’s capital city environment.

” So far, we have cleared over 1000 shanties (temporary structures made of batchers and sacks. The work is ongoing, so we will continue till the end.

” We had series of consultation with them, because in the spirit of the current administration, we don’t just move in, we do some engagement and consultations.

” So that the people would be fully aware. And that is what we have done with the community here.

The Chairman, FCT Task Force on City Sanitation, Mr Ikharo Attah, said the “RUGA”  was growing too fast and becoming notorious for rape and other crimes.

“From my own assessment, what will eventually go here will be about 2,400 structures because even as at today, the bulldozers are still working.

” It is really painful, but the displaced persons should understand that the city centre is not for everybody; they should go to the suburbs,” Attah said.

Chief Security Officer (CSO) to the FCT Minister, Mr Ahmed Rasheed, said that security assessment claimed that 90 per cent of the crimes perpetrated in Wuye and Kukwuaba districts were traced to the shanties settlement.

Rasheed said it was resolved after due diligence from all the security agencies, that if the ruga was removed everybody within the area, would be secured.

He also said some months ago, some people from the shanties attacked and broke four window glasses of a train on test running on the rail corridor.

” It is good for us (FCTA) to remove the shanties to make sure that the railway corridor is safe and people in Wuye and Kukwuaba Districts and the whole city at large.

” The Director, Development Control Department has set up a team to do a follow-up cleaning, which on a daily routine, in conjunction with security agencies, so that this kind of illegal settlement will not come up again.

” This is the best approach for security control of a city like Abuja,” Rasheed said.

Reacting to the operation, Secretary to the Chief of the Ruga Community, Usman Abubakar, conceded they could not question the relevant authority from demolishing the structures in the settlement.

Abubakar, however, pleaded with the government to consider them as Nigerian citizens, and assist them to stop slums from thriving having been living on the settlement for more than 25 years.

“We will be satisfied if government can give us a small land in this Abuja, so that we will occupy and settle down.

” Considering that our children especially youth and our women are living here, but now many of us have nowhere to go from here.

” We are pleading with the government to consider helping us, because the incident has affected at least 500 households,” Abubakar said.

Parading the men in Abeokuta, the Commissioner of Police, Edward Ajogun,

said the suspects were arrested in their different hideouts within and outside the state by operatives of the Special Anti – Robbery Squads (SARS).

The police commissioner told newsmen that the leader of the gang sustained bullet wounds in his abdomen, right hand and thigh during an encounter with the SARS operatives.

He added that he was traced to his home in Ajangbadi area of Lagos on September 17 where the wife was treating him.

Ajogun said that the gang leader had lied to his wife that he sustained the injuries in a road accident.

The police chief warned criminals to steer clear of the state.

The gang leader later told journalists that he “hustles” at Alaba International market, Lagos, saying that he regretted his action.

He said that he had earlier left the gang because of the way they were shortchanging him with proceeds from robbery operations only to rejoin them later.