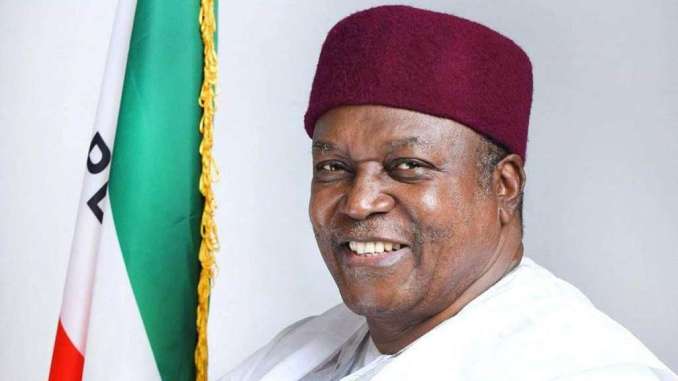 …As Stakeholders call for more awareness against human smuggling***

Gov. Darius Ishaku of Taraba said military and police operatives had been deployed to construction sites in the southern part of the state to provide security.

Ishaku disclosed this while inspecting road construction sites in Tsokundi and Chanchangi villages in Wukari and Takum local government areas of the state.

He explained that the road projects awarded in 2017 had to be abandoned because of the high level of insecurity in the area.

He said that two graders belonging to the construction company were burnt, while threats to the lives of construction workers had slowed down the pace of work at the sites.

The governor disclosed that the road projects were critical to the lives of the people of the area.

“With the deployment of security operatives, work has resumed and steady progress is being made,” he said.

He commended the WE Construction Firm handling the projects for doing a good job.

Ishaku urged the people of the area to embrace peace to enable the government to provide them with the dividends of democracy.

Earlier, the Commissioner of Works, Mr Irmiya Hammajulde, said 33. 8 per cent of the 30 kilometre road from Wukari to Tsokundi had been completed.

Hammajulde assured that with the restoration of peace and increased presence of security in the area, the project would be delivered before the end of 2021.

In another development, Stakeholders in the Prevention of Human Trafficking, Smuggling and Migration, has called for increased awareness against smuggling of innocent Nigerians to other countries.

Mr Joseph Osuigwe, the Technical Advisor, Communication and Awareness Officer, Action Against Trafficking in Persons and Smuggling of Migrants (A-TIPSOM) made this known in a statement on Thursday in Abuja.

Osuigwe said that the Smuggling of Migrants (SOM), a global organisation was concerned with the large number of countries being affected, adding that this necessitated the call for stakeholders to step-up more awareness on the menace.

He said that smuggled migrants were vulnerable to exploitation, which often put their lives in danger and exposed them to various kind of sufferings

“Thousands of people have suffocated in containers, perished in deserts or drowned at sea while being smuggled to another country.

“The smugglers and their network are responsible for providing services to irregular migrants thereby evading national border controls, migration regulations and visa requirements.

“This action undermines the integrity and security of countries and indeed that of Nigeria and every year, this has cost so many people, especially the youths their lives,” he said.

According to him, the activities of smugglers call for more awareness in communities, schools and among the young people who are often prone to this menace.

Osuigwe said that the sensitisation was aimed at identifying tools for use to increase the level of awareness and acquainting participants with knowledge of potential migrants.

Others are identification and characteristic, mapping out awareness creation strategy on SOM for NIS and creating short public enlightenment messages against irregular migration and SOM.

The statement quoted Mrs Caroline Adepolu of the Nigeria Immigration Service (NIS) officer in charge of migration division, as appreciating A-TIPSOM for its effort, saying that NIS would leverage on the gains from the workshop to improve its prevention strategies.

The A-TIPSOM is an EU-funded project and is being implemented by International Ibero-America Foundation for Administration and Public Policy.