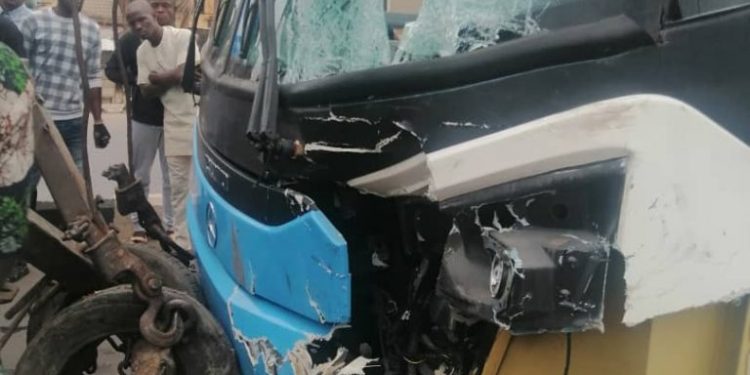 The firm, in a statement by its Head of Corporate Communications, Mr Mutiu Yekeen, commiserated with the family of the victims.

“At about 4 a.m, a bus heading to Abule-Egba from Oshodi, was involved in an accident that claimed the lives of two on the spot.

“A commercial motorcyclist, according to the Busman, appeared from nowhere on the BRT corridor.

“The driver who could not avoid the motorcycle which had no headlamp and was facing the oncoming bus, knocked down the victims,” Yekeen said.

According to him, the driver of the BRT bus quickly ran to Oke-Odo police station to report the matter.

He said that when the Lagos State Emergency Management Agency (LASEMA) team arrived at the scene, two people were discovered to have died on the spot and were taken away by the team.

Yekeen said that the third person was taken to the hospital by the emergency team.

The BRT spokesman said that the officers at Oke-Odo Police Division had the BRT bus and the motorcycle (Okada) in their custody.

“The matter is still under investigation as the IPO in charge of the case asked the BRT management to give police 48 hours for the families of the victims to appear.

“The life of every Lagosian is precious to Primero.

Also read:  OVER SPEEDING: One dead, 3 injured as 2 vehicles collide in Ikoyi

“While we regret the accident that led to the loss of lives, the management appeals to all commercial motorcyclists, private cars and ‘danfo’ drivers to stop encroaching on the BRT corridors to avoid future accidents,” he said.

According to him, operators are facing so many challenges on BRT corridors and the biggest remains motorcycle riders encroaching into BRT lanes.

“We urge the Lagos Metropolitan Area Transport Authority, LAMATA, and Lagos State Traffic Management Authority, LASTMA to assist in deploying their officers to checkmate the activities of drivers that have invaded the BRT corridors,” he added.

It was reported that Primero Transport Services Ltd is one of the three firms operating the new high-capacity buses on Oshodi-Abule Egba BRT lane.